The Himalayas have always been kind to me. It is, in fact, a matter of considerable pride that I have never come back from the hills without getting a glimpse of the mighty peak that I sought. I was not completely disappointed in the trip that I am about to partially describe, but the Himalayas gave me a peek only for a few moments; and that too of a melancholy kind. I suppose they have their own wisdom. 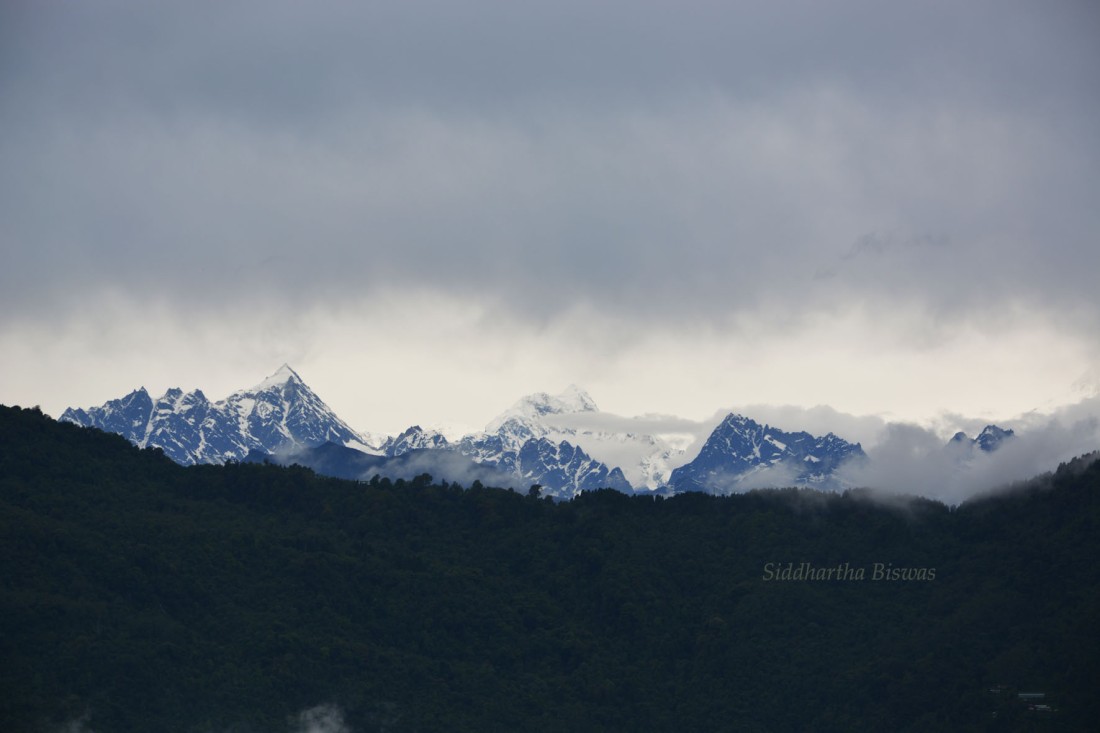 I will tell you the Gangtok story some other time. Let me just say that despite being one of the most crowded places on the hills, Gangtok still has a characteristic charm. It is quite easy to fall in love with Gangtok. We stayed at the Sikkim Tourism hotel called Mount Jopuno and the four nights we had spent there, were in four different rooms! But that is for another day. 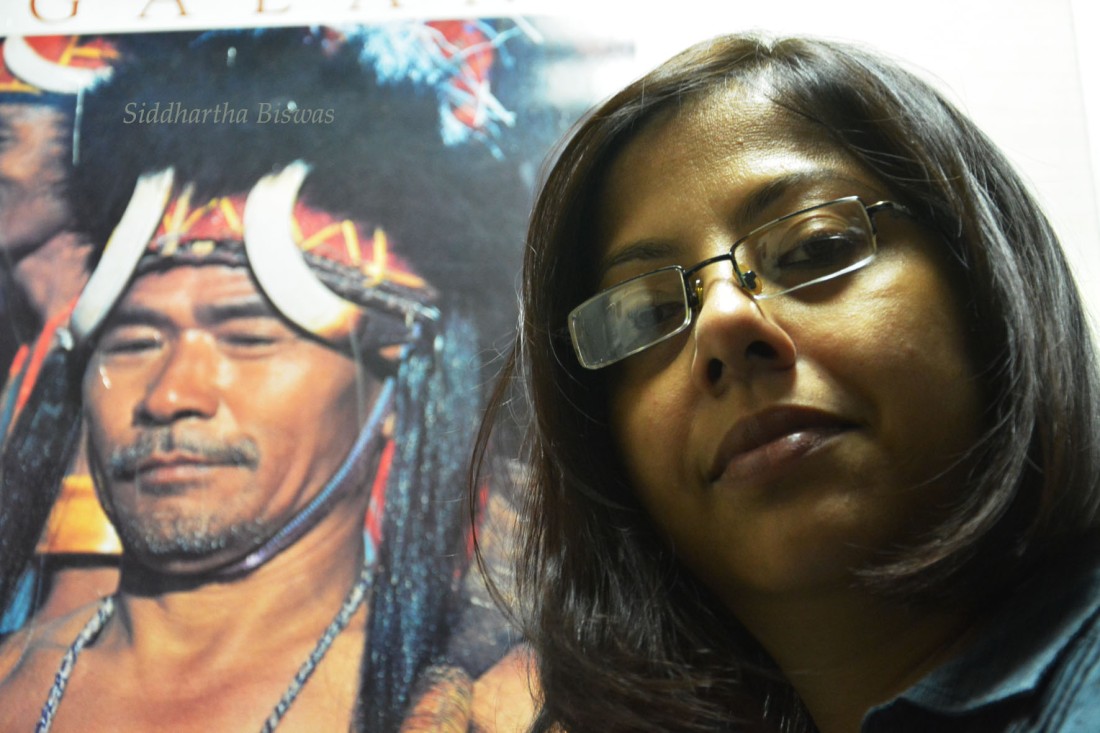 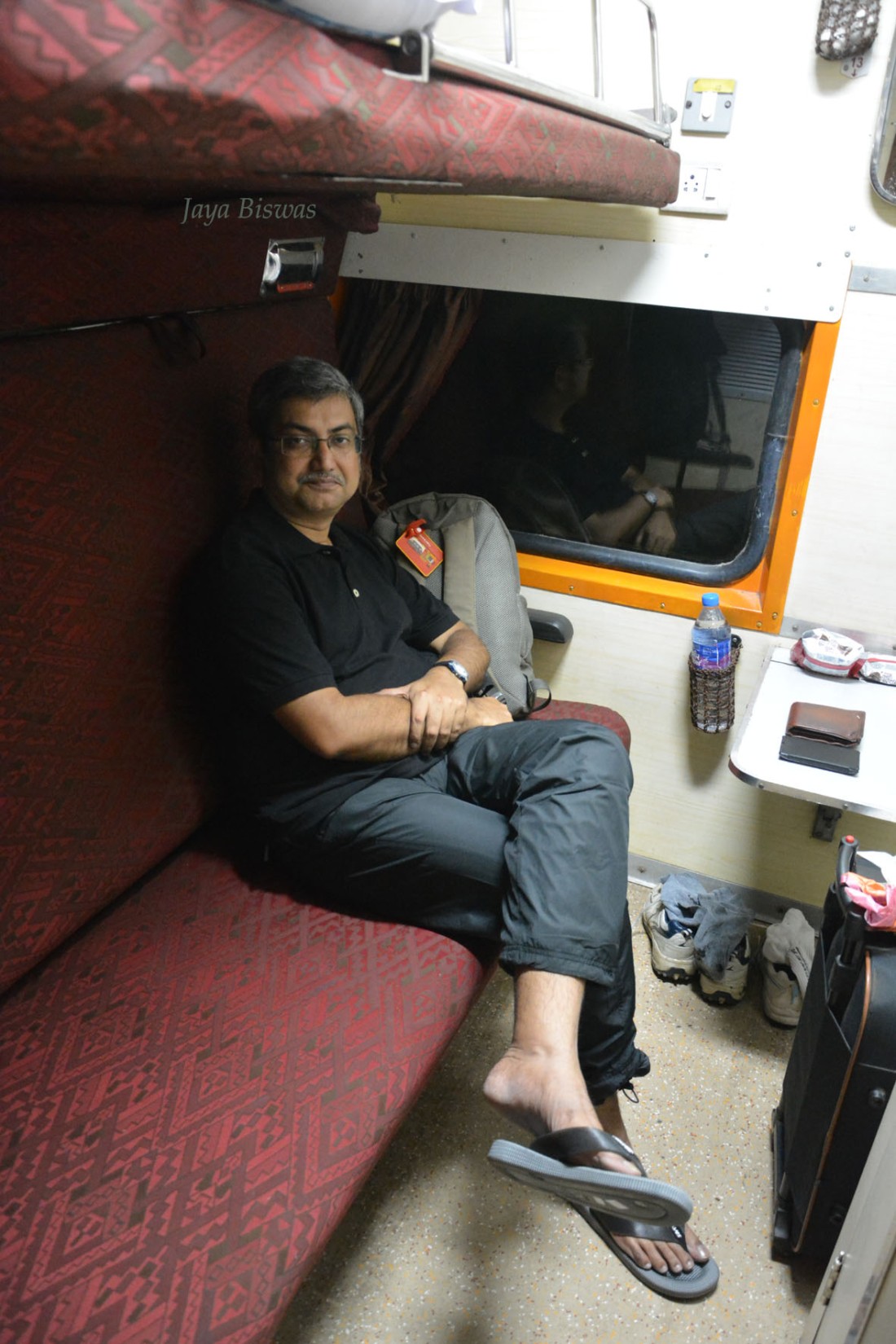 (Since there were no tickets we bought AC1 tickets in Padatik Express, and found a two-bunk cabin)

My travel agent had referred us to another travel agent in Gangtok. They had an office worth describing. It was in an alley of stairs less than two feet wide going down towards heaven knows where. And we started having doubts looking at the bunch of young men in leather jackets. I was much older then, so my confidence in my abilities was much lesser. Jaya also had been going to the gym for merely five years (only about 3000 hours in total), so I could not entirely depend on her either. Anyhow, we were assured that a car would pick us up from our hotel and deliver us to the taxi-stand from which vehicles of such expedition depart. Gangtok has this wonderful rule that long distance vehicles cannot go beyond a number of designated taxi stands; the rest of the way has to be either by local taxi or on foot.

Early in the morning we left, along with some excellent delicacies from Tripti’s. In fact, I had left them at the reception of the hotel, the local taxi driver brought them and obtained a handsome tip. The journey started like all journeys. And as always I asked the driver – another youngish lad in leather jacket and black jeans – what his name was. He said something that I completely failed to grasp. So I used my usual method, “What do I call you?” I asked. He replied, “Prem.”

In India, if you are named Prem, you are either a popular Khan, or you are a Chopra. (I must apologise to my good friend Premballav-ji of Harsil for this levity, but generalisations are the absolute truths in our country!) It does not really matter whether you are a Chopra or a Khan; you merely signify different kinds of criminality! So with much trepidation our adventure began.

North Sikkim, as it is, is known for its dangerous roads and magnificently rough terrain. 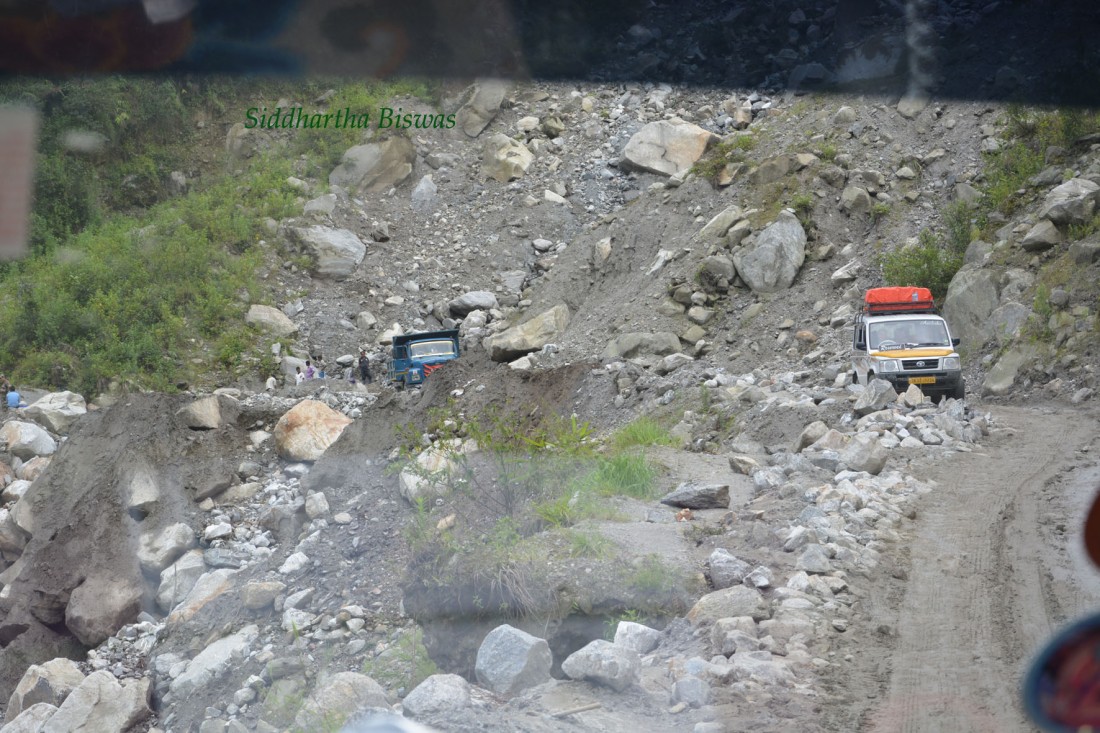 On top of that we had this man, apparently a government servant driving tourists as a hobby, who had very little consideration for the two passengers he was carrying. We always give people their due respect. But when someone is acting as a driver of a tourist vehicle, he is supposed to cater to the needs of his passengers, not act as the senior sarkari officer seating at his table. I had never thought I would see such bureaucracy outside the bureau – and in a car. This man would stop the car every fifteen minutes. It would be apparently for our benefit – to show us a beautiful corner of the road or a lovely plain concrete bridge over a calm hilly river. 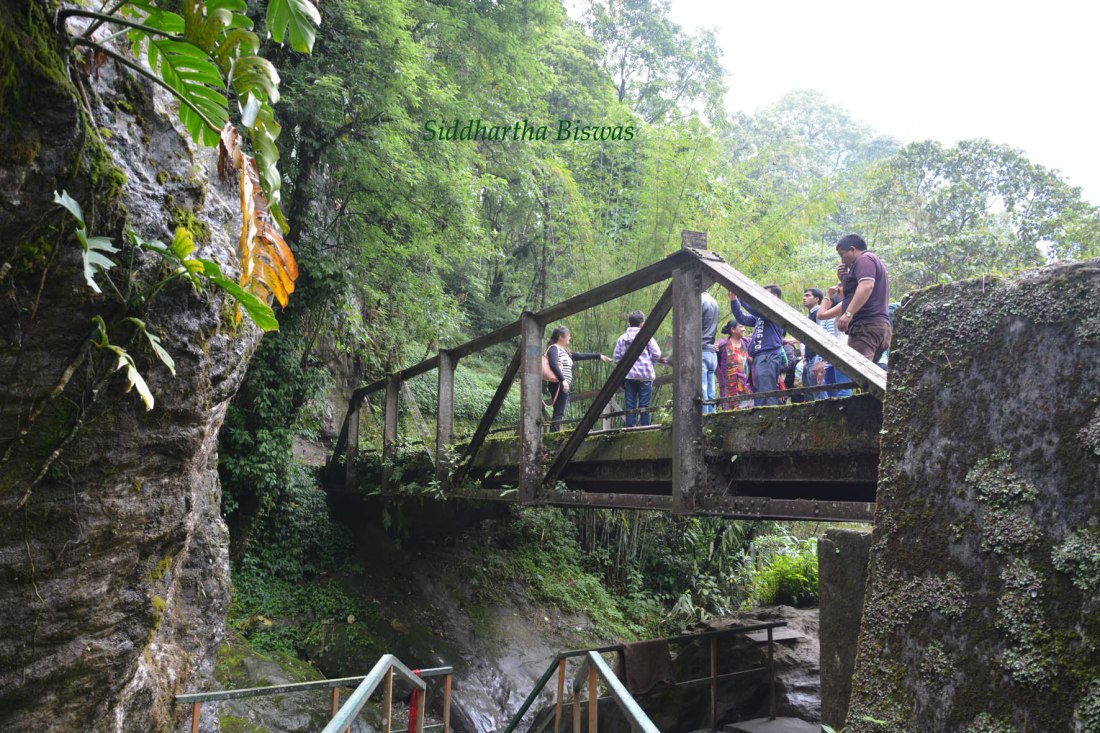 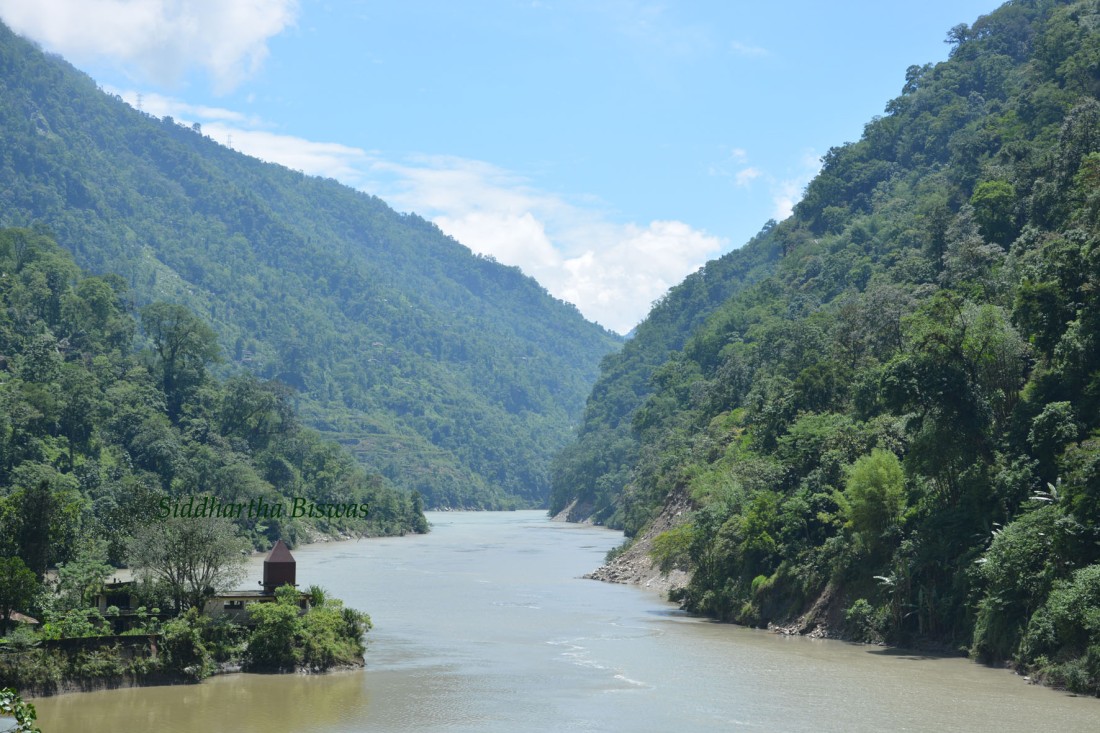 We tried to tell him that we have seen plenty of calm hilly rivers. But he paid no heed to such insignificant noises. Soon we discovered that this man knew every single person of that region and he had to speak to them individually. And such conferences, to him, were unthinkable without cigarettes! 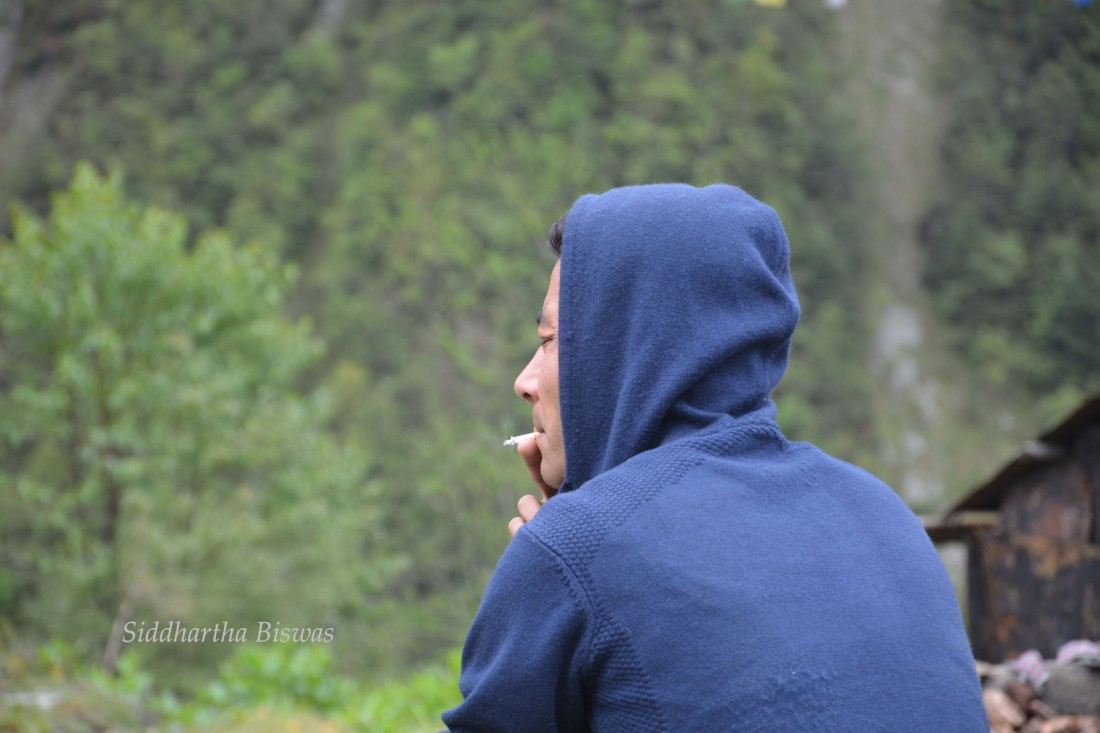 When we mildly protested his attitude showed us our general irrelevance in his scheme of things. Who knew bureaucrats become autocrats when they are in cars! The only reason we stayed put was because there was no other option (and he was a damn good driver). The beauty of the roads also helped. 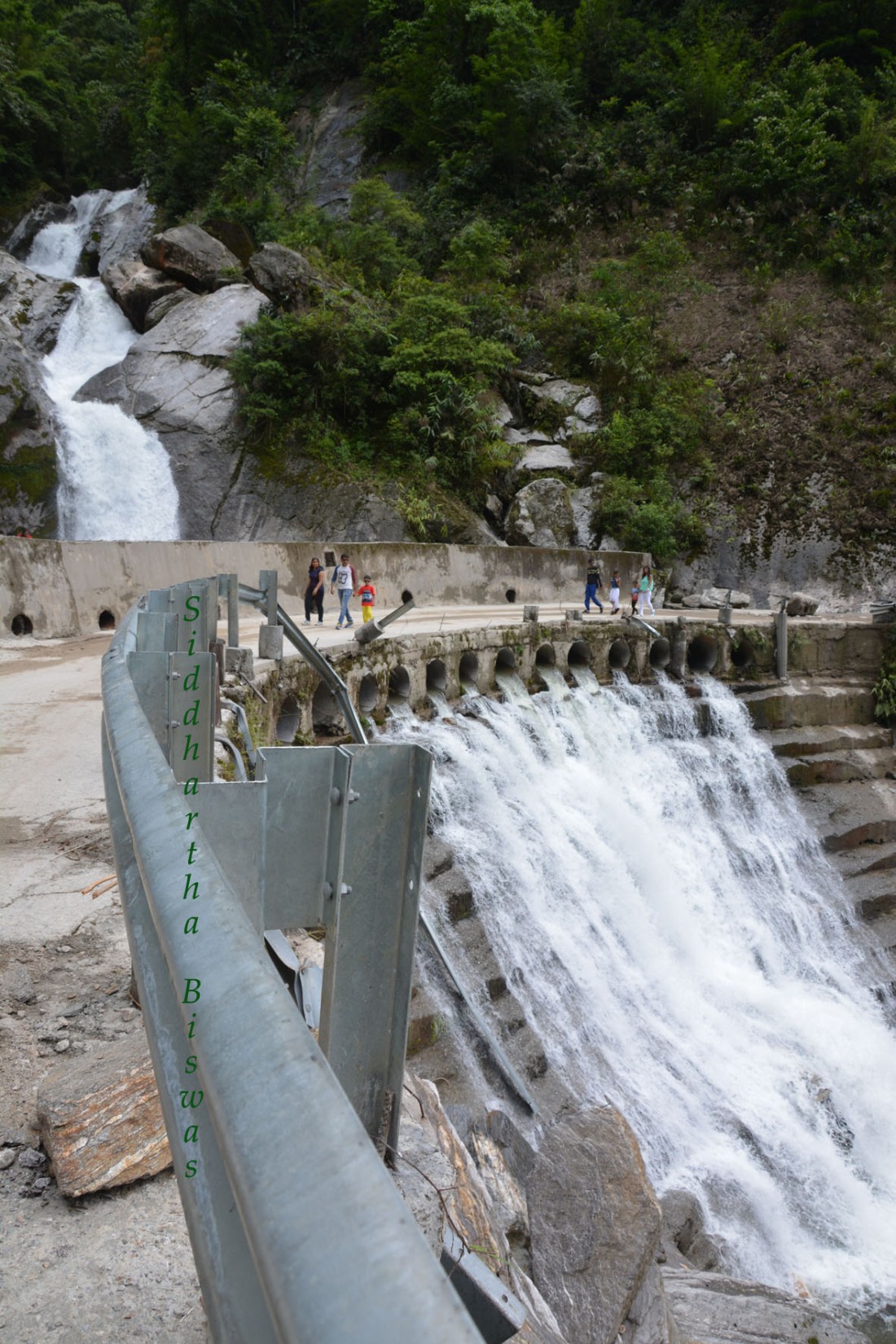 So after taking about thirty pit-stops we reached Lachen. On the way we were treated to ice-cream and coffee by Prem, but when I wanted to return the favour he flatly said no. I am yet to see another man in the hills with such an insolent nature! And Lachen did nothing to improve our mood. It is another jungle of concrete, as the gateway to Gurudongmar it now boasts of several hundred hotels of varying quality and honesty. 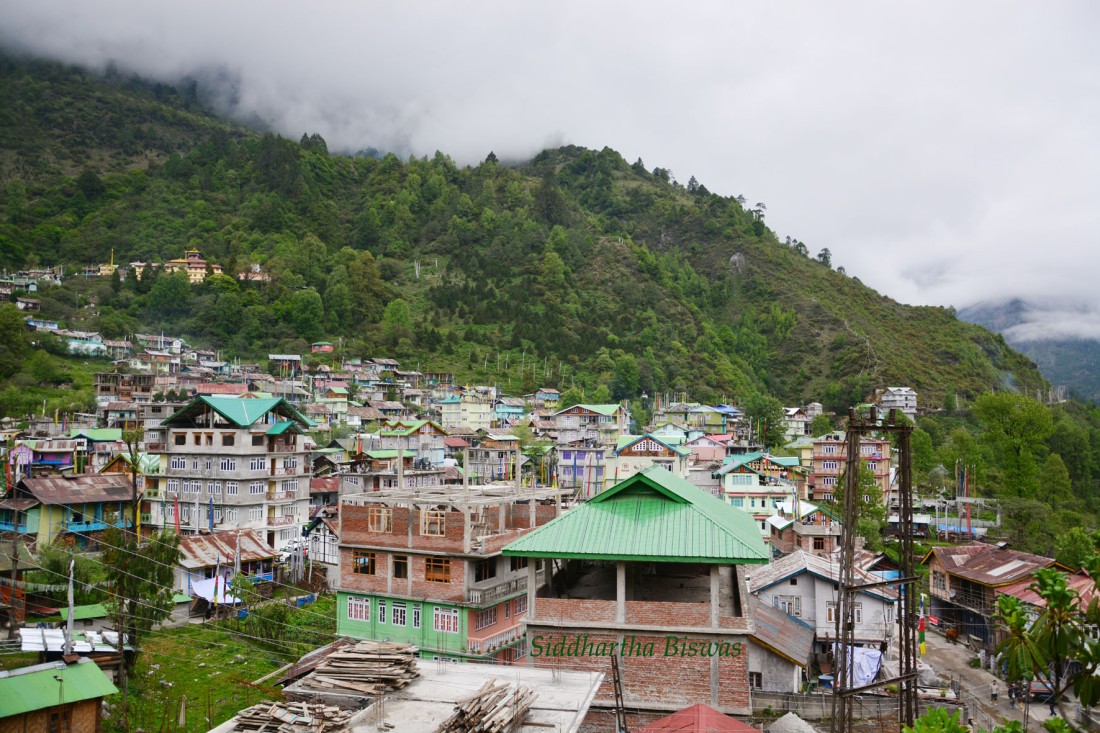 Ours was good. We had a decent, though small, room. There was hot water. The kitchen, a small one-roomed building next to the hotel, had a Bengali cook. Finding a Bengali couple he was overjoyed and his attempts at overfeeding us became quite a pain. When you are journeying for at least eight hours a day, a bellyful of food is the last thing you want. I remember we were returning from Badrinath and we took the Daak-bus (the one that works for the postal department and moves with the speed of ordinary Indian post). The boy who was seating on the window seat just behind us kept on vomiting throughout the way. He had eaten seventeen aloo-ke-paranthe (paranthas stuffed with potato) and all that aloo wanted to say hello to the world.

The only place in Lachen with any peace and quiet is the monastery. It was not open when we reached it. But still it gave us some much necessary vibes of calmness. 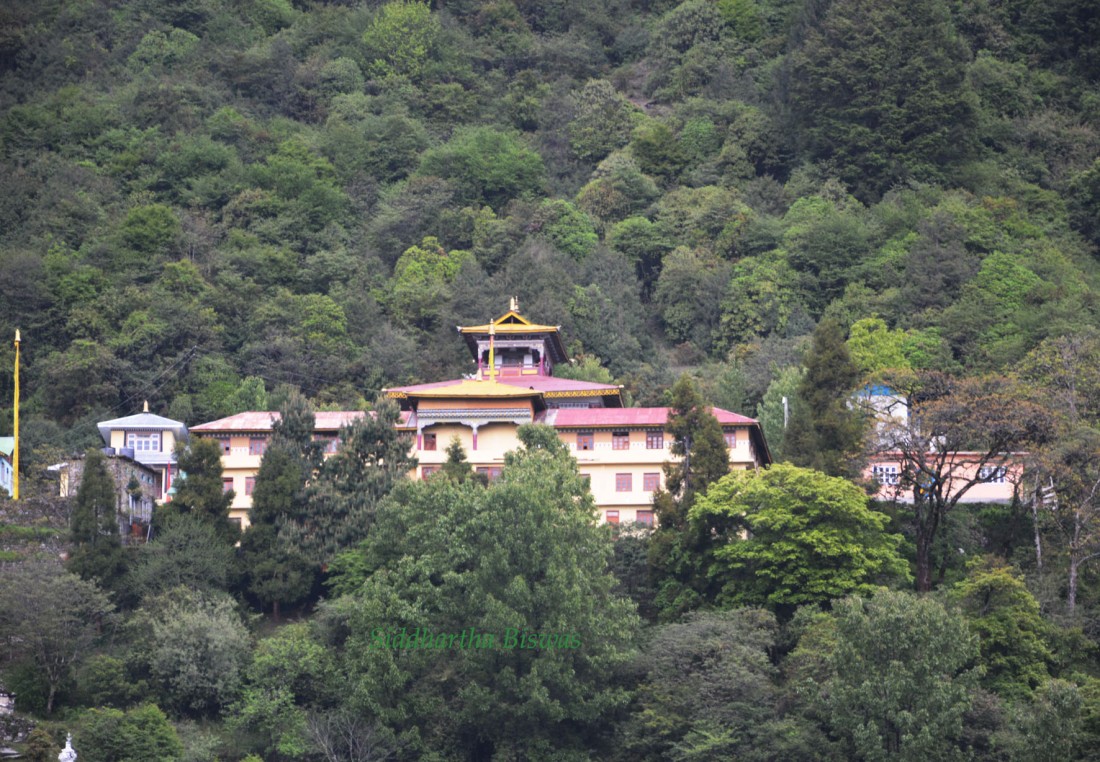 We started our journey at 4 a.m. sharp, it was pitch dark and the headlights of cars ahead of us looked magical. We have lost all the fireflies in the city, but that morning, the hills were full of these unbodied lights. You could tell that there is a hill and a winding road up there only because of the presence of those lights. Such moments make life worth living.

Soon we reached Thangu and had a necessary stop there. 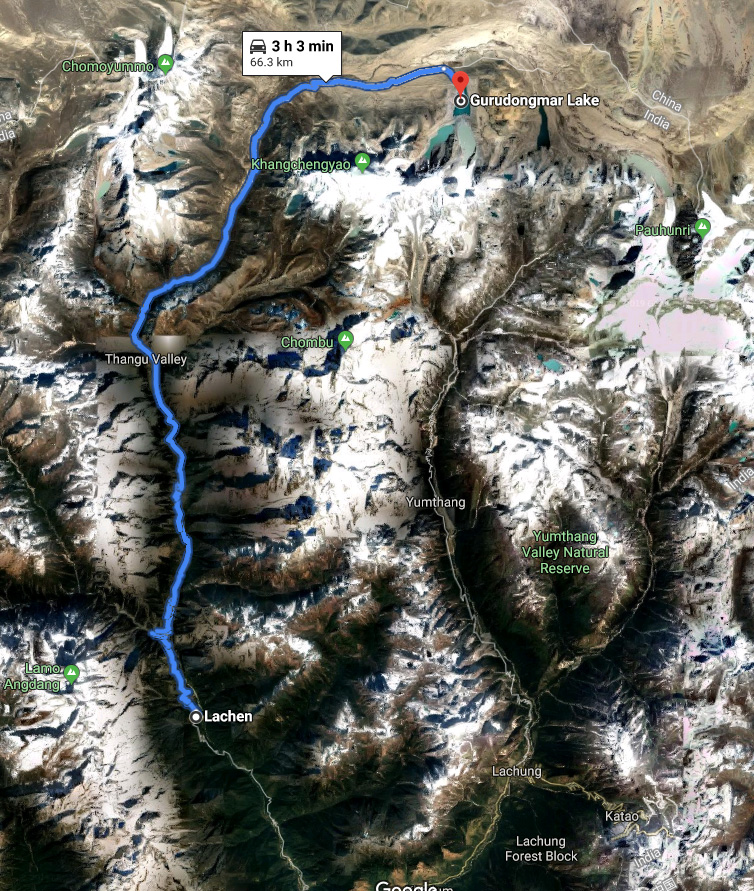 By then the sky was no longer dark. It was not quite bright, but it looked glorious. 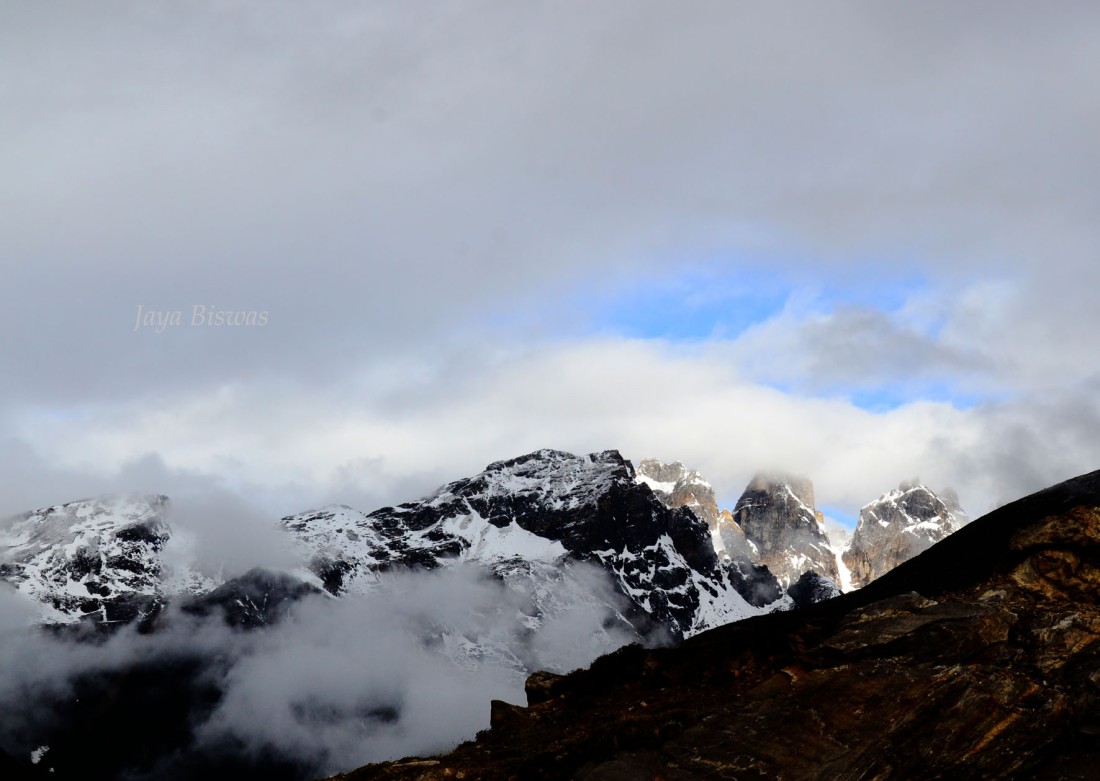 I will not even try to describe the terrain – perhaps Ladakh is the only parallel. 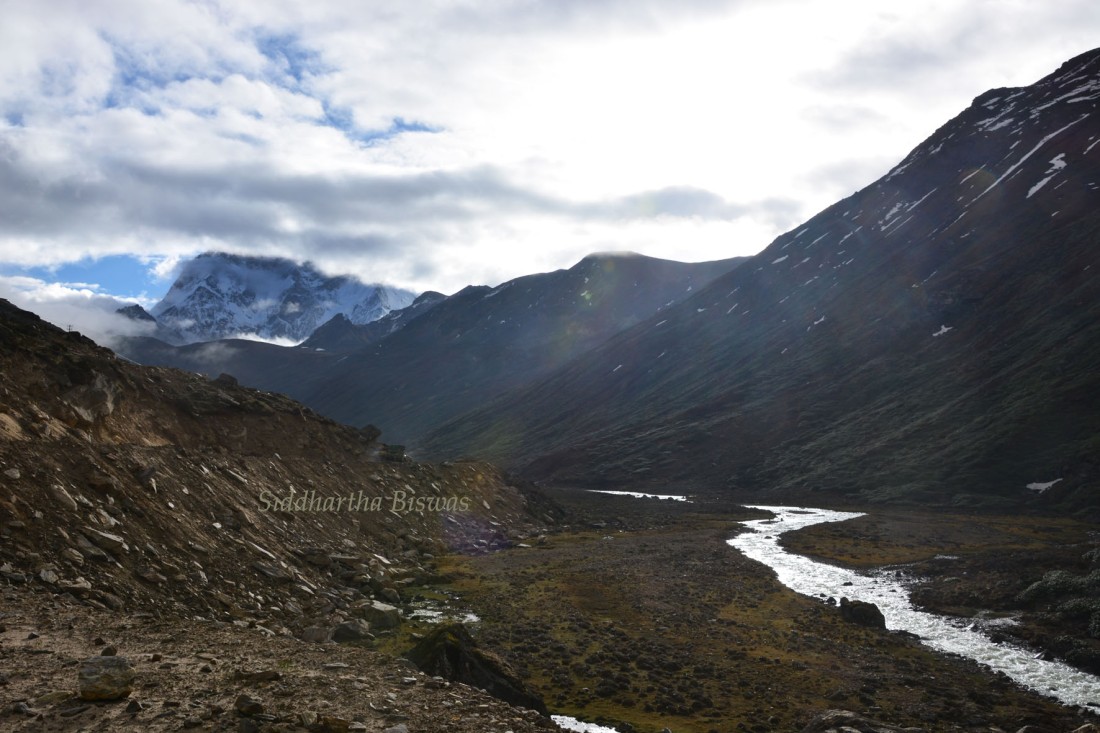 After a drive through awe-evoking landscapes we reached a military camp. There were tanks and armoured vehicles that were on guard throughout the way – this truly is a territory of some tension. 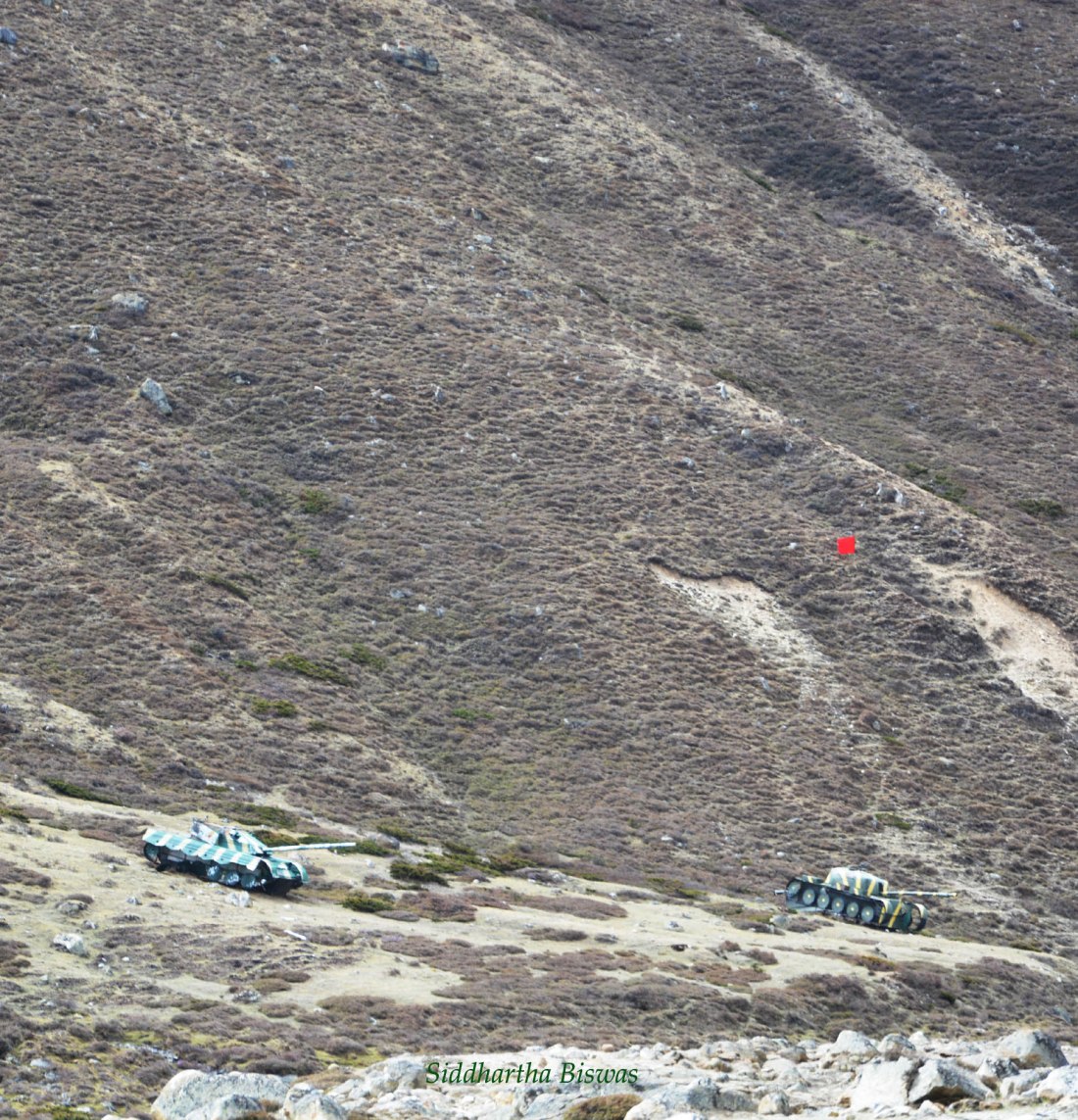 After showing the permissions and documents we entered the gated area. In about half hour the road ended. Then it was Prem and his steering. 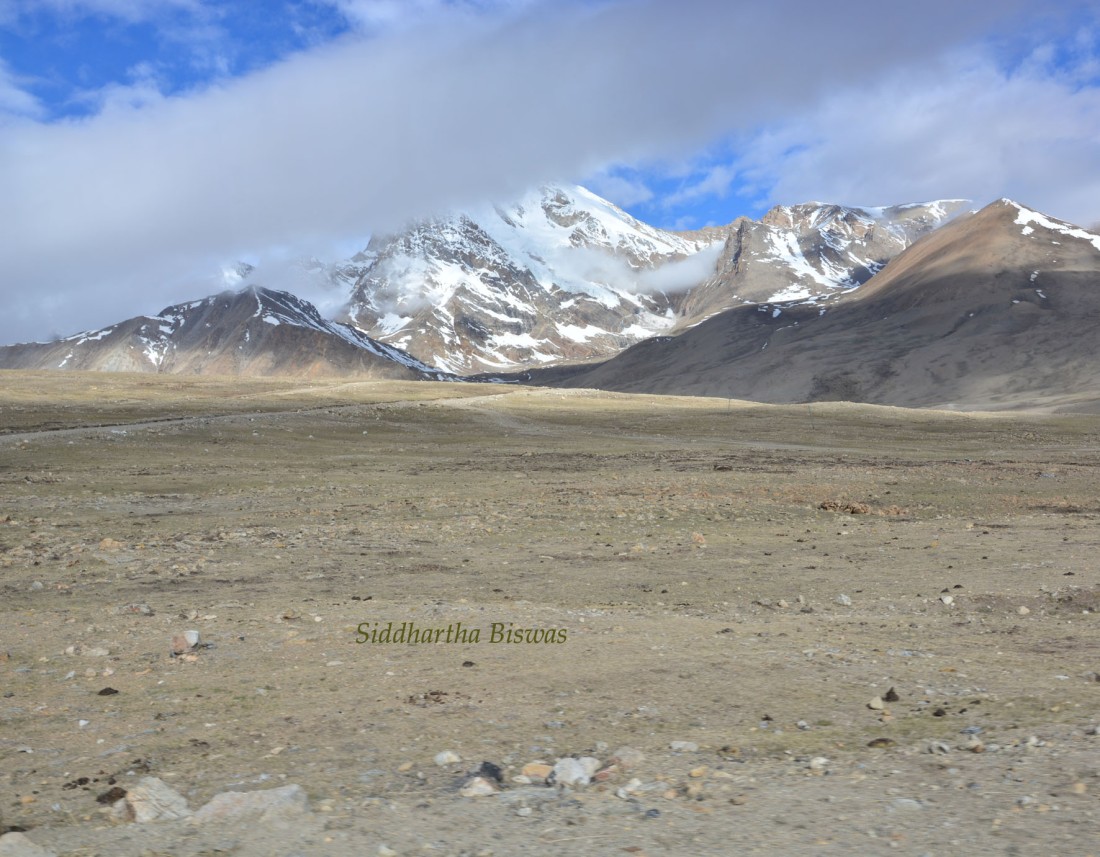 The last fifteen minutes or so is sheer instinctive navigation. And all on a sudden, after climbing up a little, the car stopped. 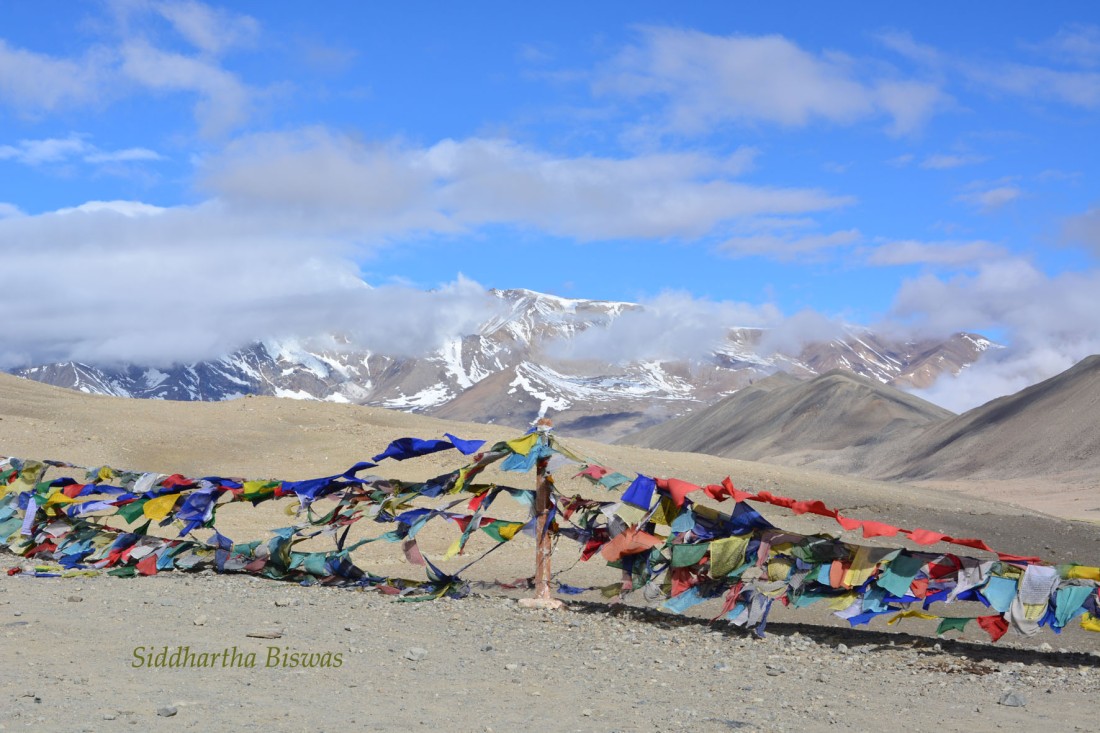 We had reached Gurudongmar. 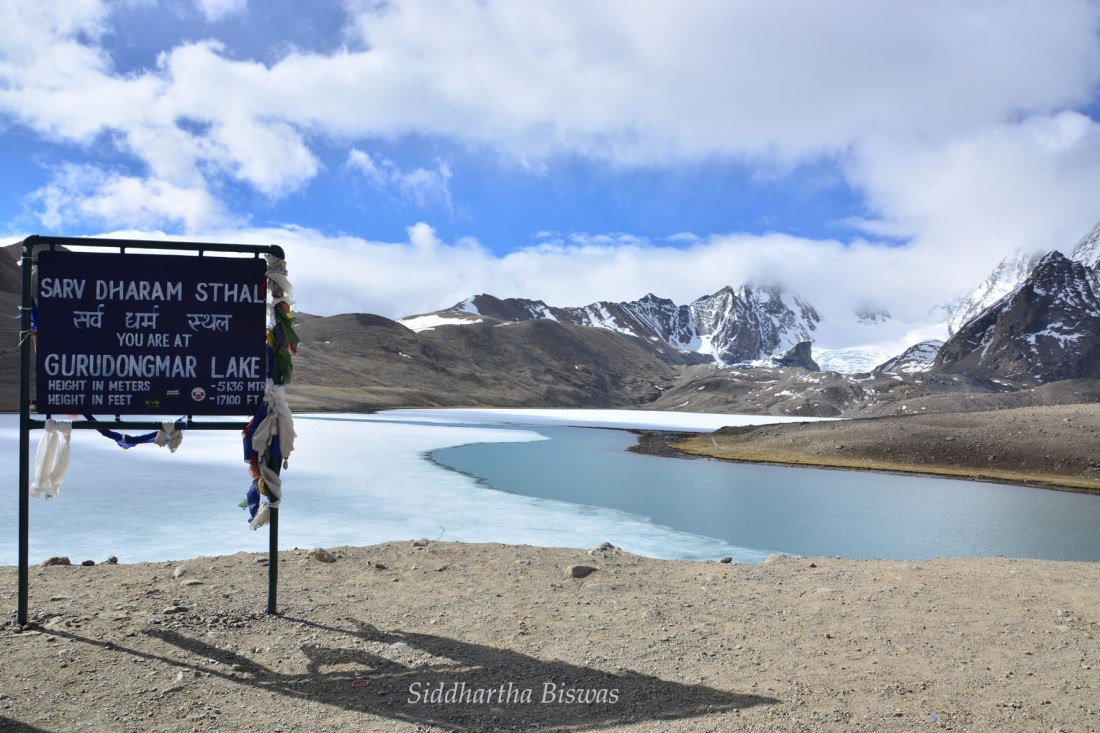 The lake is probably the most auspicious for Buddhists and also for the Sikhs. The lore says Guru Padmasambhava, who established Tibetan Buddhism, had come here eleven centuries back. The surface of the lake was permanently frozen. The Guru was approached by locals for they had no drinkable water. Padmasambhava touched the surface with his holy hands, and part of the surface became liquid. This is the Buddhist part. The Sikhs believe that Guru Nanak had come here once and blessed the lake. So they had built a Gurudwara here. After much cacophony, that structure was handed over to the Buddhists as the arbitrators decided this was actually a Buddhist zone. Such stories do not seem to leave us. 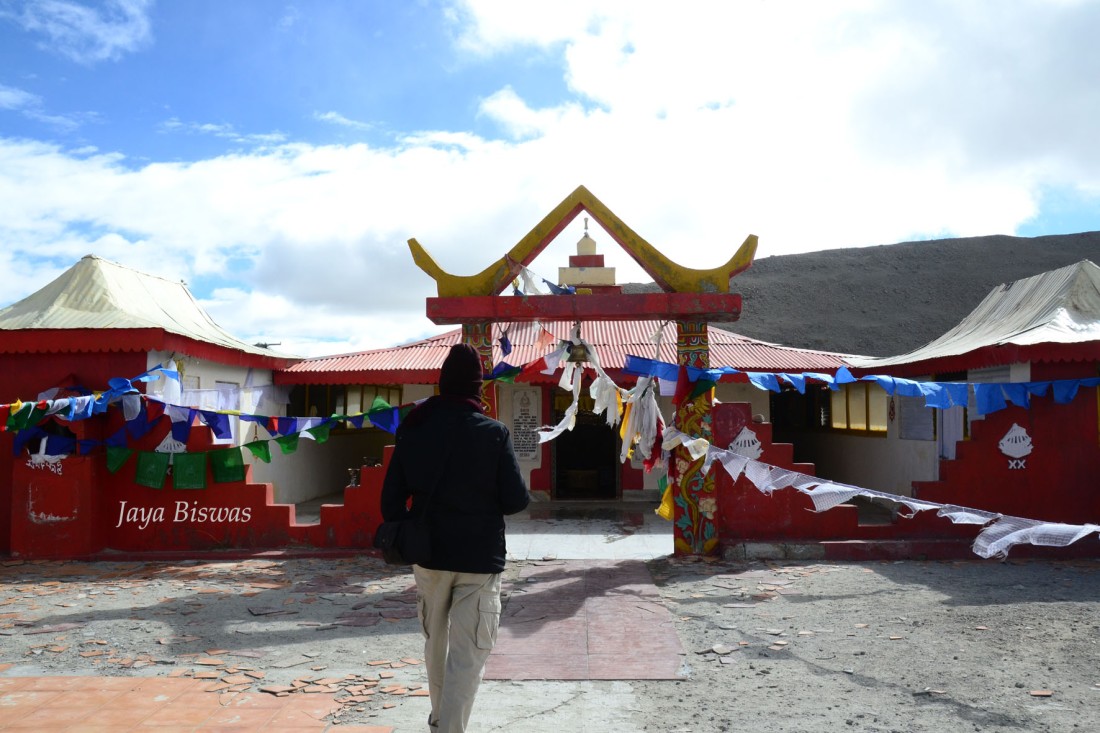 A wise friend of mine had advised me to reach the lake before 7:30 in the morning. The reason being the wind that starts to blow from around 8 a.m. and it makes the water ripple. If you can reach early you get a clear sky and a startling reflection of the hill next to the lake. We were there at exactly 7:30. But the weather gods were in no kind mood. There was a strong wind and the sky was full of clouds that you could touch just by reaching out your hand. 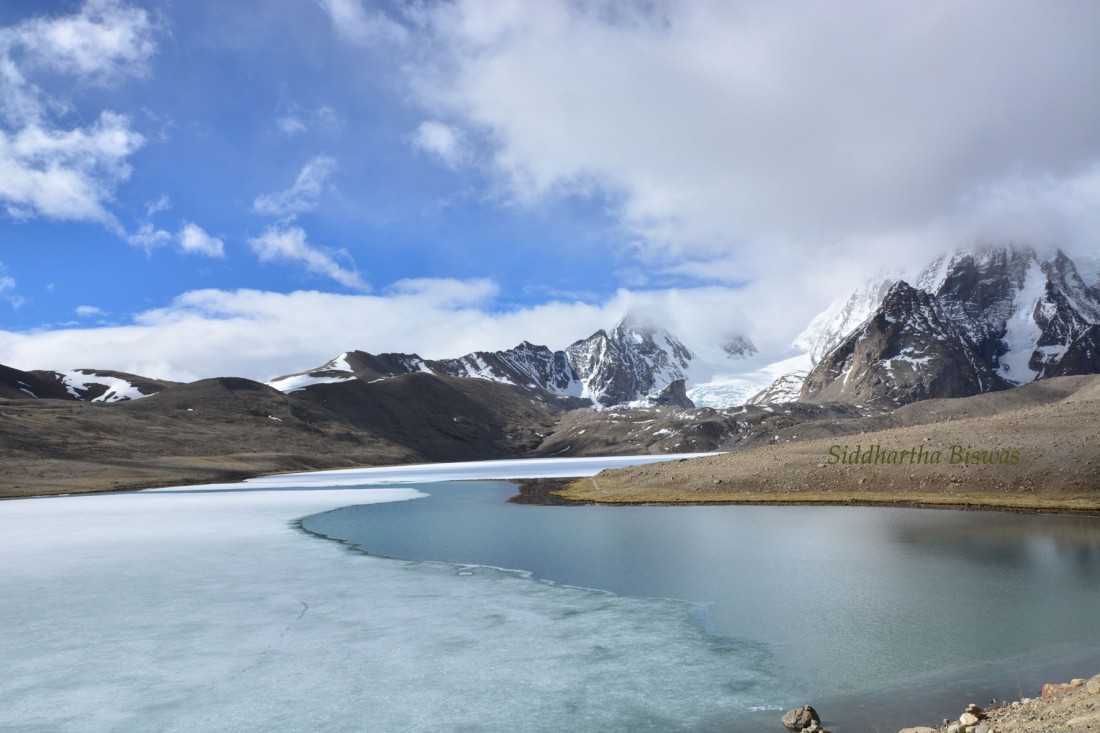 Gurudongmar is situated at 17,800 feet. Many people who go there suffer from breathing difficulties. We did not. 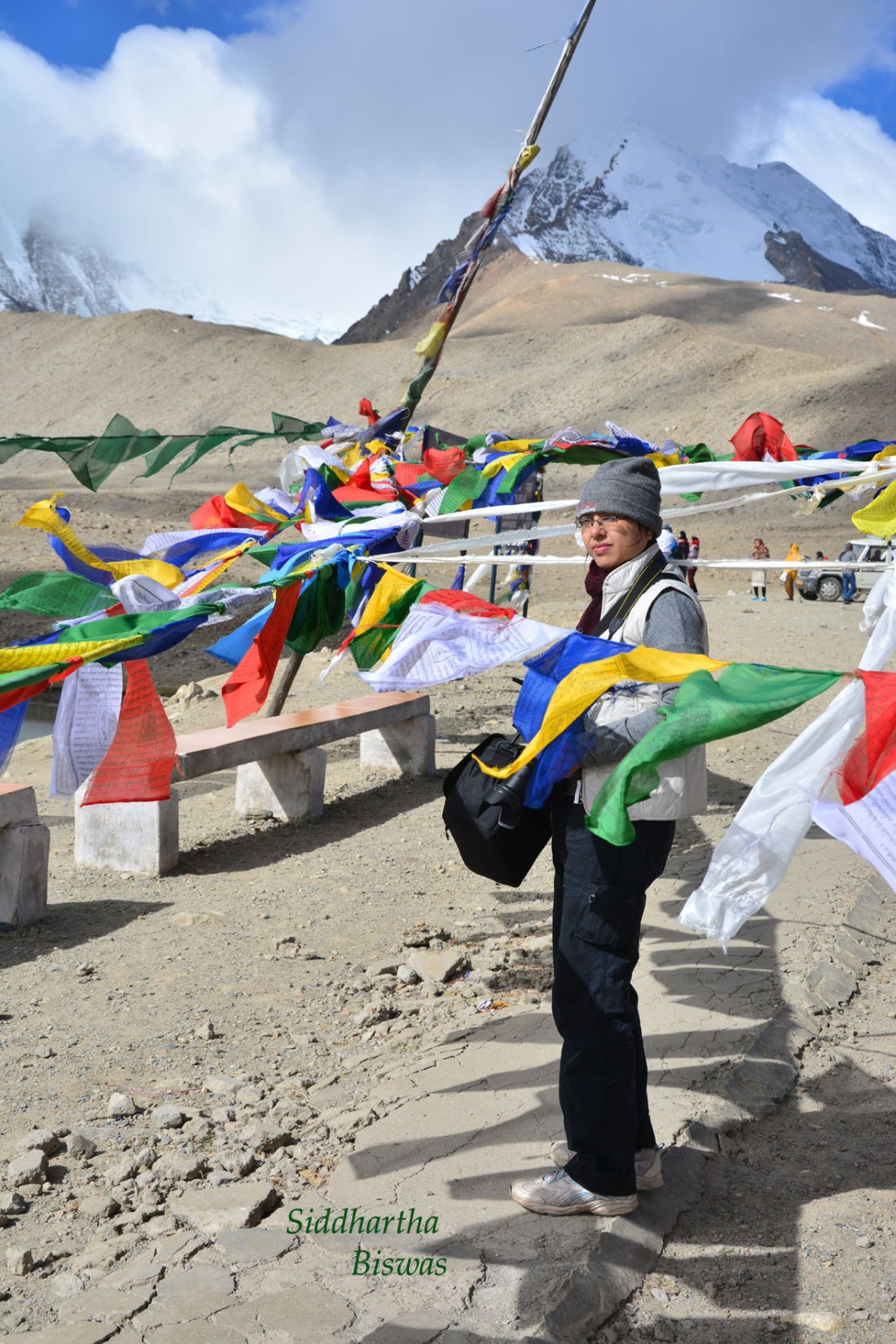 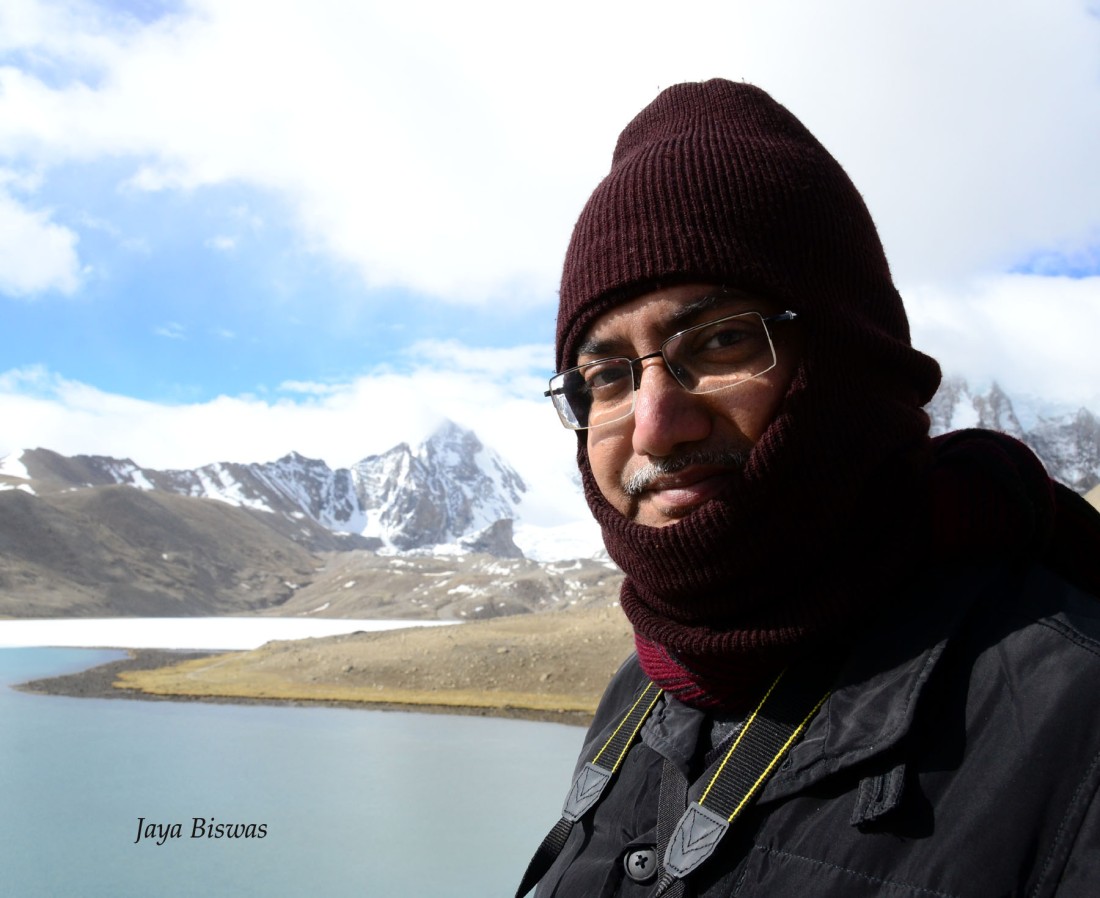 Of course, we were not really inclined to dance around or mimic Usain Bolt. We moved normally, and all those who know me, know that my favourite animal is the tortoise. So we went clickity click with our cameras, having our hearts’ fill. 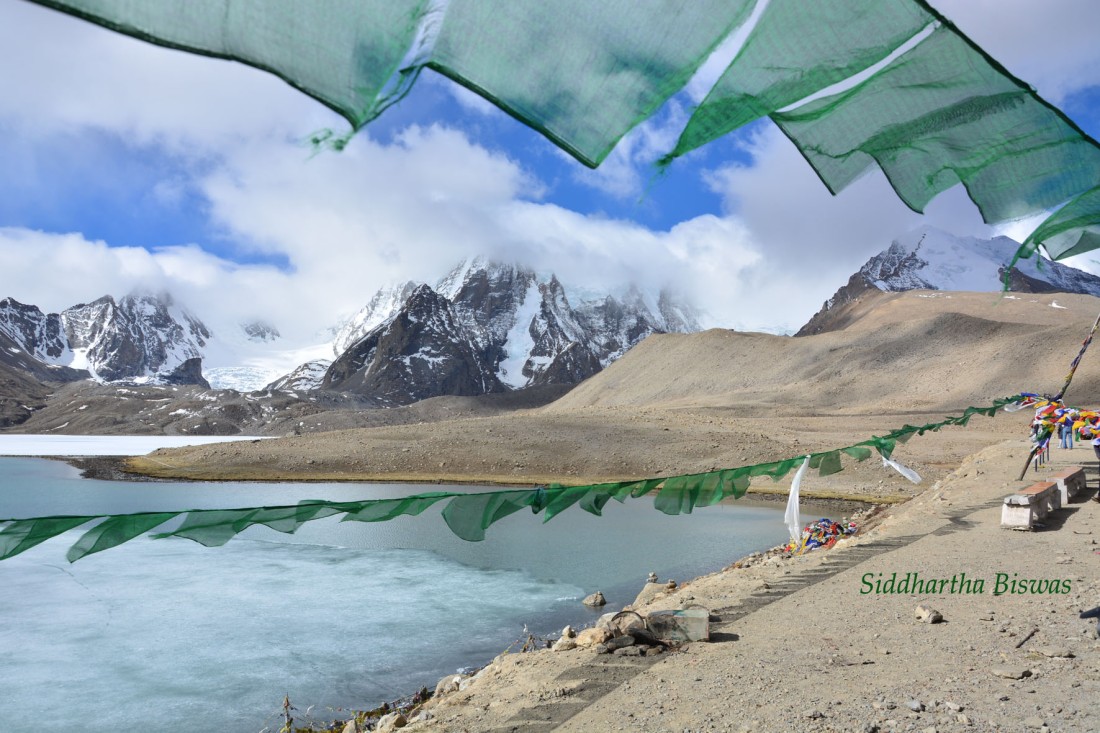 They do not allow you stay there for more than half an hour anyway. So we spent the time wisely and came back to Prem (who, for once, was not smoking) and then we drove back to the camp. The soldiers treated us to some tea, which we gratefully drank. The temperature, even in the daylight, was around zero. And then began our return trip to Lachen. The landscape was even more beautiful with a light drizzle going on. 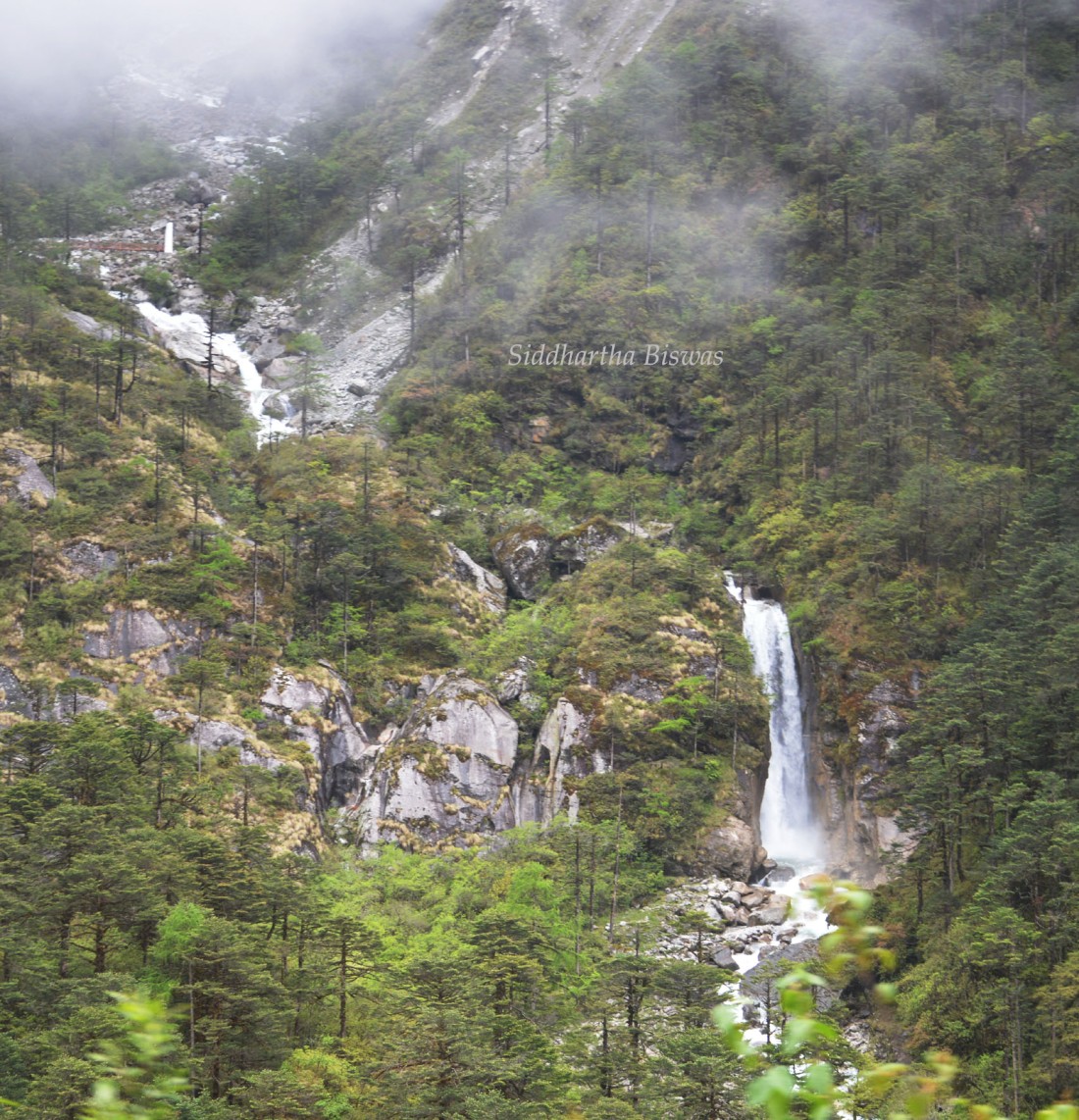 We managed to irritate Prem by spending some time at Thangu and eating some lovely noodles. He would have his revenge later. But that story will come soon. 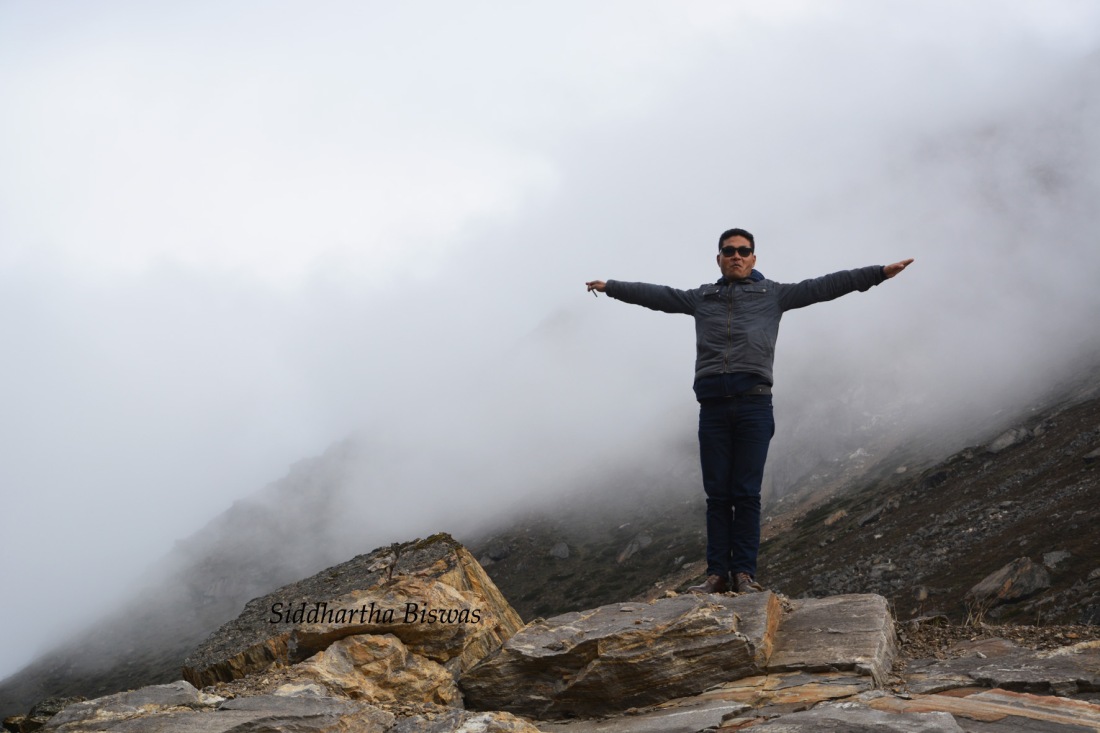