If you are fascinated by old buildings you must walk around a city. You will find a few crumbling ones here and there, and you will find that most have been pulled down to make room for hyper-ugly geometric shapes. But there are a few left which still manage to take your breath away. And when you are in a city like Lucknow, you will be repeatedly awed by not only the nawabi, but the colonial as well. I am not speaking about the famous edifices (which are quite magnificent) but many surprises that hide here and there in different shapes and different conditions of upkeep.

Some tantalize you from a distance. 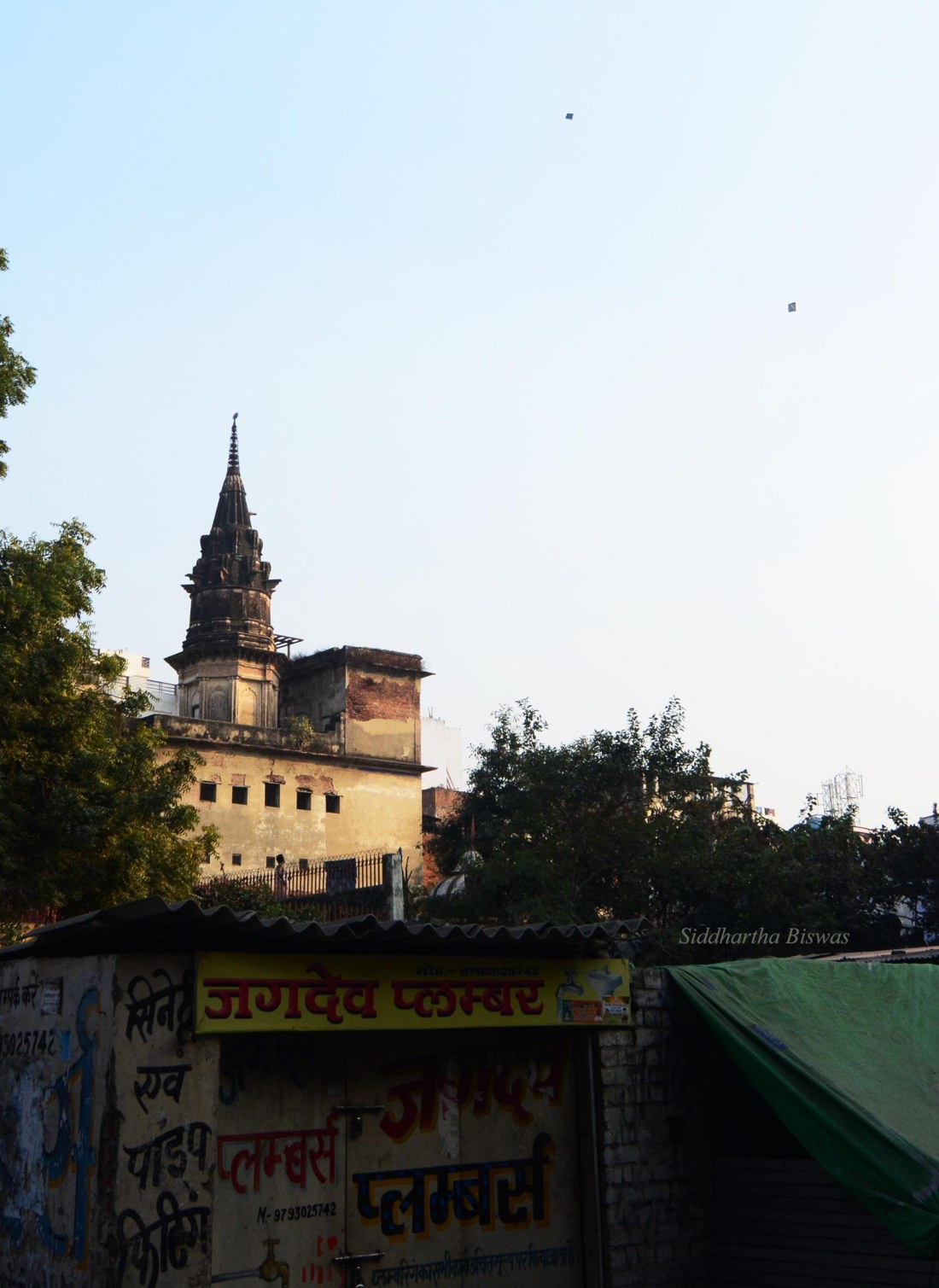 However, if you are looking for a couple of stunners, then you should read on.

There is a place called Butler Colony in Lucknow.

It is quite posh and there is a gated area which houses ministers, IAS officers, doctors, eminent lawyers, in short the elite. The maps show that there are multiple points of entry, but don’t be fooled. We found one main gate which was for vehicular traffic and one revolving grill gate just wide enough to allow an ultra-slim person in – I barely managed to slide through. My wife had no problems! I saw no security arrangement so I am sure our little excursion didn’t amount to trespassing. But I would have entered anyway since in the middle of the colony there is the magnificent Butler Palace.

It was built for the Deputy Collector of Awadh, Sir Francis Harcourt Butler. The Butlers lived and died here. The excitement began after that. Local lore says that no one could stay at this place because it was haunted by the ghosts of Mr and Mrs Butler. Their apparitions apparently appear regularly and discourage material possession. Of spiritual possession we found no record. There are also stories of Ramsay Brother-ish ghosts, but they are imagination running in a different direction, often under different influences. The unglamorous version is that it is a victim of red tape and not blue apparitions.

The palace is in a completely unattended and dejected shape. It gives you a melancholy vibe and the beauty of the structure makes one wonder how modern bureaucracy can be completely blind to aesthetic merit! But, perhaps, it is for this bureaucracy the building stands. Who knows what kind of idea some politician or official may have come up with given a free hand to modify the building! 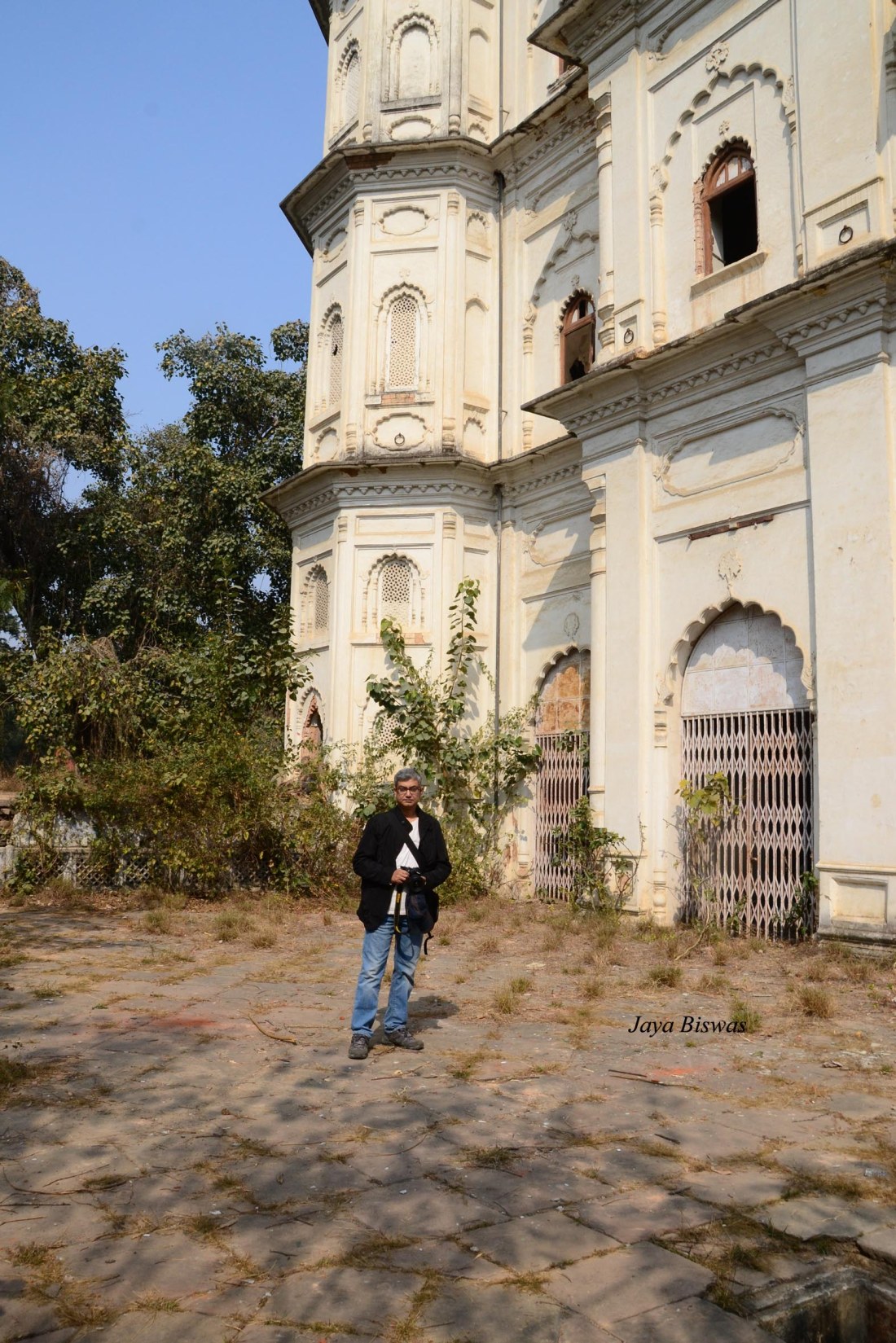 The interior of the palace seemed interesting – broken windows and broken doors mocked the official looking locks on the elaborate collapsible gates that guarded the main entrance. But the fear of falling plaster and a number of stray dogs that claimed ownership discouraged us from going inside. (To be perfectly honest there was also a slight apprehension of meeting either or both of the Butlers!) 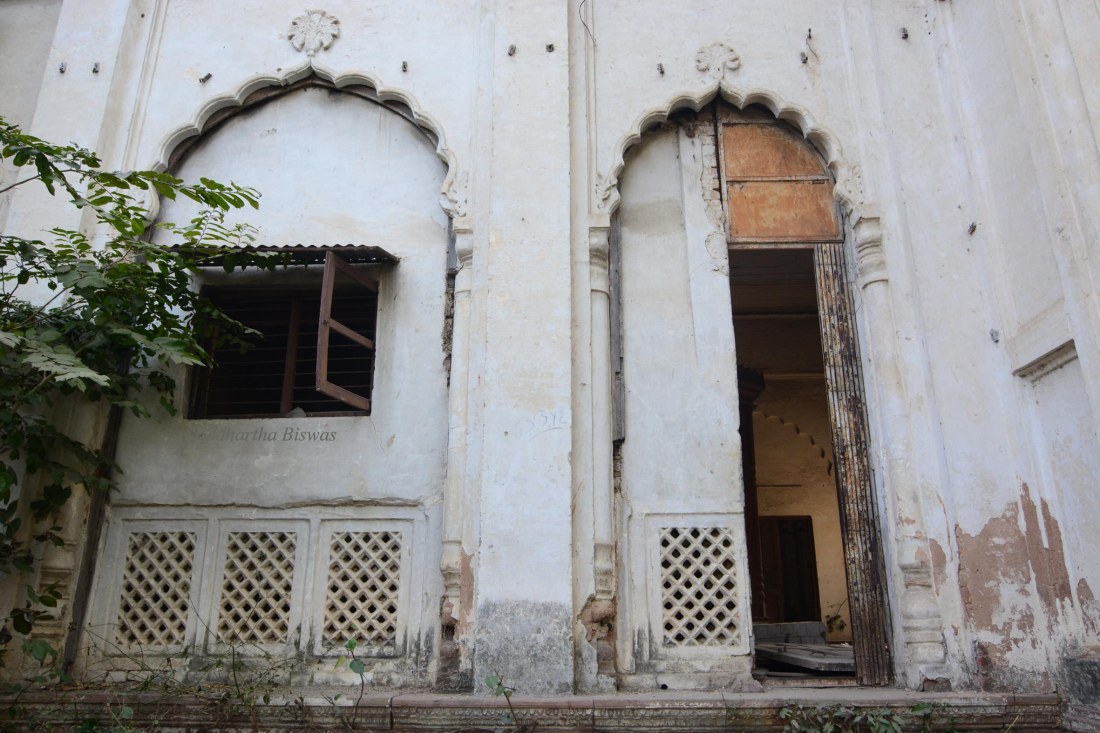 On our way back we met a number of curious eyes. But I guess my white hair and the ‘foreignness’ of Jaya acted as question-deterrents.

Our next destination was La Martiniere.

The huge campus itself is impressive and a very friendly security person welcomed us with a pride that spoke of intense love for the institution. We later had a lengthy chat in which his single agenda was to find out if any other La Marts campus was equal in grandeur. The first striking structure is the mausoleum of Boulone Lise (known also as Gori Bibi) who was Major-General Claude Martin’s companion.

After walking past a couple of edifices, including William Hodson’s tomb, and the stables and some classrooms and the Mews we finally reached our destination – Constantia House.

This was the planned home of Major-General Claude Martin who did not live to see the completion of this house. He is said have donated the then princely sum of Rs. 1,60,000 for mostly educational purposes. 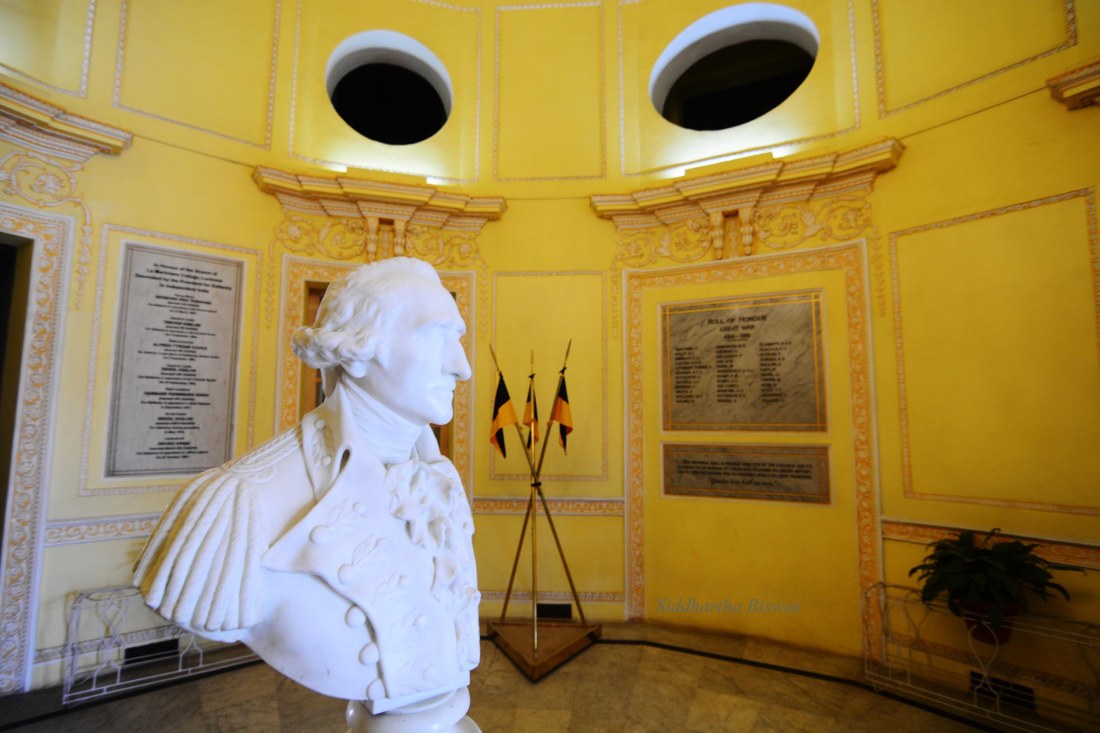 The house remains a witness to the French legacy that has a smaller but strong presence in India. A lovely building with a lovely chapel and library and exquisite workmanship – this one stood in stark contrast to Butler Palace.

The foyer was brilliant.

As was the now protected drawing room. 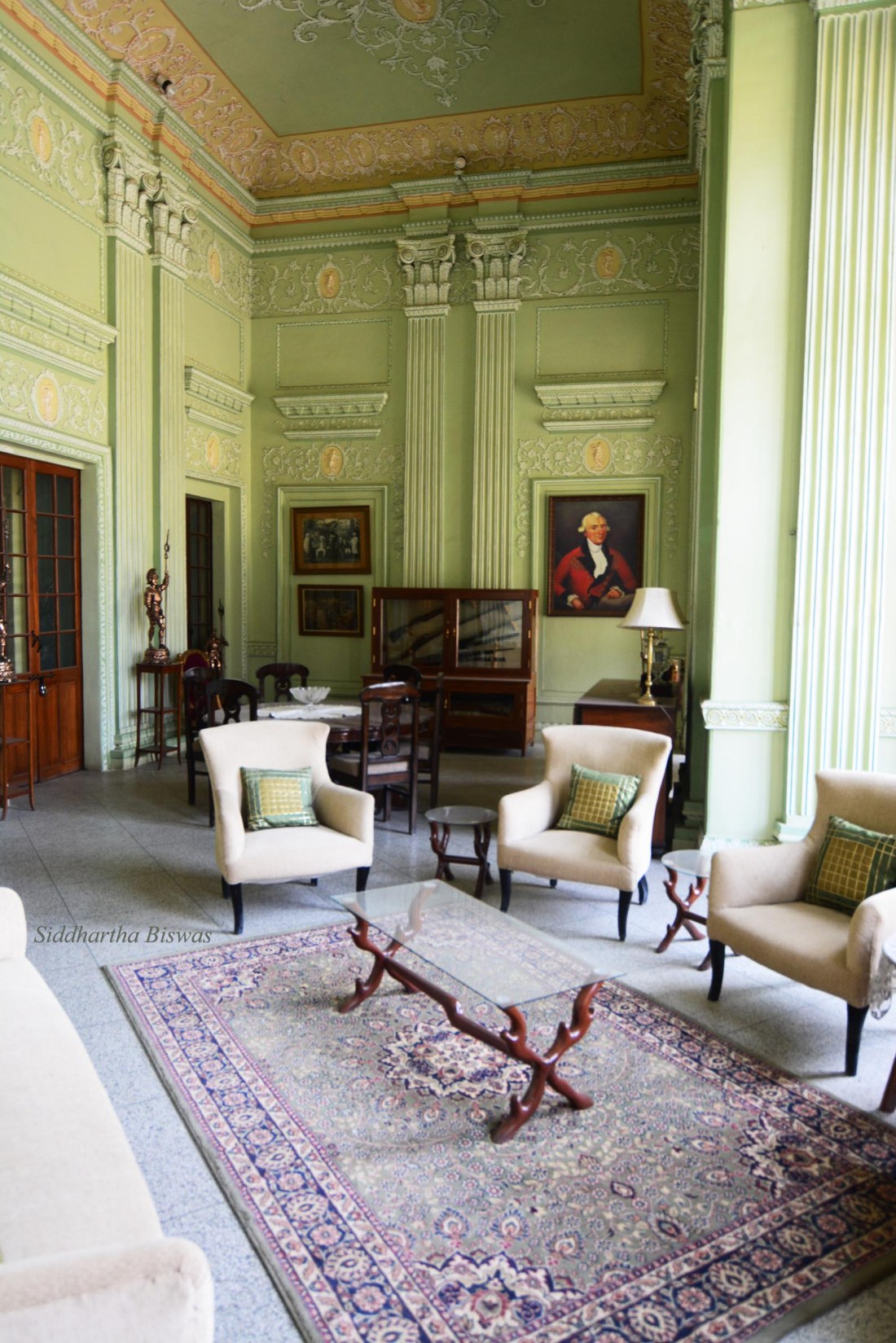 Being a part of an elite school Constantia House has faced no neglect. A look at the drawing room of the house is enough to help you travel through time. History records (though mostly omits) much of the colonial cruelty, but beauty, whether truth or not, speaks of the human in everything. And thus we must continue celebrating everything that is in essence beautiful.