I think it was early 1999. I had just begun my career as a Part-Time Lecturer. I did not yet have a regular job. But my travelling spree that had started from the Puri adventure (after my HS) continued unabated. Of course things were extremely affordable those days. The budget for an entire trip would be four to six hundred rupees. Could not really afford more since the little money that we earned from giving tuitions to kids (the pay would be like one hundred and fifty rupees for two two-hour sessions per week with some little monster at its lair) did not exactly make us rich. The monthly pay of a Part-Time Lecturer was three hundred rupees then.

But even in that budget we managed to get decent accommodation, we did not require any luxury and ate anything anywhere. And there were no shopping needs yet! We had successfully completed our first trek a year or so back. On that trip the camera malfunctioned and we have no photos of a magnificent place that is now almost impossible to visit. So we decided to go for our second trek. After not so much deliberation we decided to hike to Ayodhya Pahar.

This was a time when mobile phones were a distant dream. Some ultra rich or ultra important people had big (big means big) handsets and the charges were ten rupees per minute for both incoming and outgoing calls. Digital cameras were unheard of! Communication from distant places meant calling from what were known as STD-PCOs. I guess there are still some around. It was a thriving business then. It is curious how we have had a ‘revolution’ in telecommunication since then but nothing such in any of the life-saving areas. 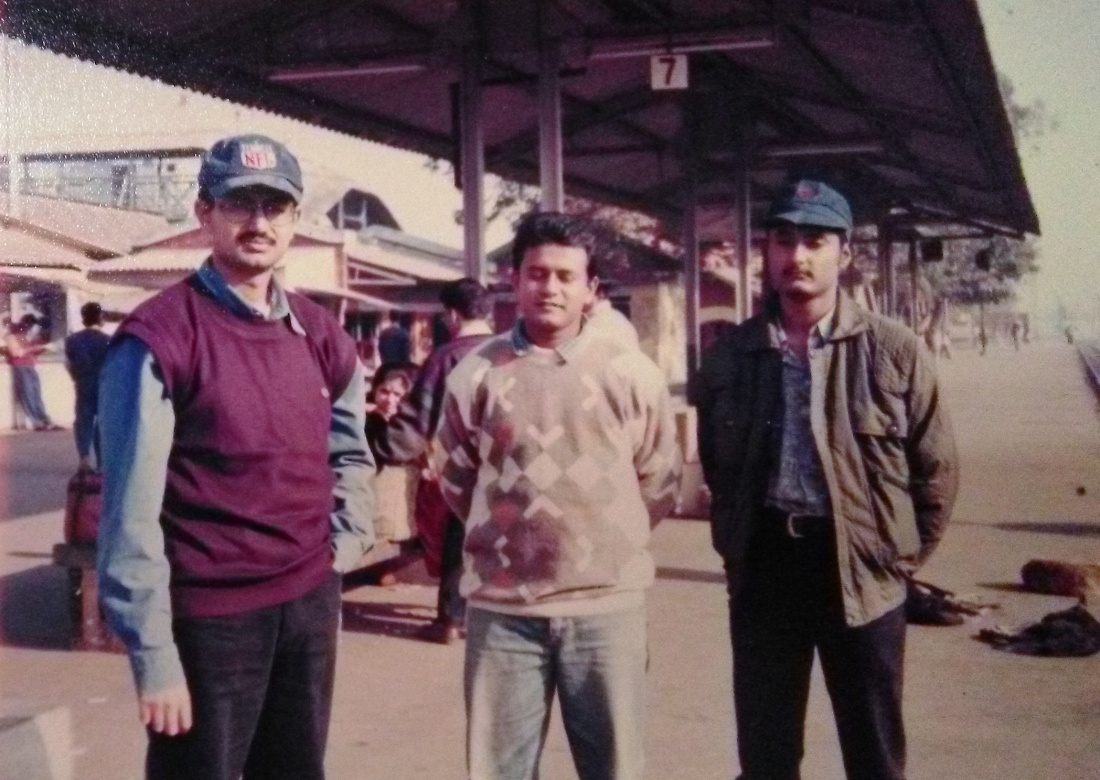 Then an insanely crowded bus took us to Baghmundi. And after asking a few people we started our walk. We couldn’t afford a guide.

There were two options: the vehicular road and the steep tracks used by locals. We chose the second first. After an hour we felt that our hearts are no longer with us.

The unanimous decision was to find and follow the road more-travelled. And so we did. Within minutes a car stopped and the kind old lady sitting at the back asked us if our car had broken down. We told her we were walking because we wanted to walk. I still remember the look she gave us! And immediately the car sped away. They probably thought we were either madmen or were idiots.

Then we met another dear old lady who took pity on us and told us to follow her. She was a tribal lady carrying a large bundle of wood. She was probably sixty. She knew a short-cut. In about 30 minutes she vanished from the view because this short cut was steeper than the longer cut that we had begun with and she probably was a doe earlier in her life.

And to top it all we reached a rocky plateau sort of place on which there were no track visible and we found three possible paths leading towards three different directions. It was late afternoon. There were no people to be found. We were in the middle of a short cut which was completely unpopulated. We had no clue and we were all dog tired.

The road has its own logic. And somehow or the other help always comes. We sat there for twenty odd minutes. I don’t think we had any food left. We also did not have a lot of water. But all of a sudden one of us spotted a man cycling through one of the plainer paths. Our shouts were not feeble. This man almost fell from his cycle. Cannot blame him though – imagine his surprise in seeing four weird young men jumping up and down in a place known for its eerie seclusion. It is a wonder he did not run away. This man came to us, gave us a piece of his mind and the necessary directions.

We reached our destination in the evening. We had our accommodation booked in the Lodge maintained by State Tourism. Maintained is hardly the word – the buildings looked haunted, electricity was erratic, water supplies quite moody. There was one staff member who disappeared after the formalities. We stayed in the dormitory with a bunch of uncouth middle-aged men (who are now old men I guess) whose delight at inventing expletives offered us with new vistas in linguistic accomplishment.

We also had a cottage booked. It was quite expensive. I think its rent was around a hundred rupees per night. We wanted a little luxury – which meant a toilet of our own. This cottage was not unlike Miss Havisham. It probably was lovely at some point in history, but at that moment was completely dilapidated and dark and trying to convince itself that it was still functional.

We had absolutely no problem with it. The only thing was there was no hot water available anywhere. This was early January, the water was freezing. We devised a way. We went to the back of the cottage. Then we kept a bucketful of water in the soft sun hoping it will kill the cold. We had to take turns as there was only one bucket. When the water looked sufficiently unfrozen, the person whose turn it was would steel himself contemplating all the stories of hardship and heroism that everyone older than us heaped on us. And then, clad in essentials, the chosen one will lift the bucket over the uneasy head and empty it at one go. All of us went through this torment. When all that cold water comes in contact with the body, the body performs strange involuntary movements. You do learn much from these trips.

[On the second day we realized that the back was not uninhabited. Behind the crumbling boundary wall there was a path which was frequented by local folk. on the first day some had witnessed our performance. On the second day the audience had grown larger. Their loud laughter made us aware of their existence, and that was the end of our bathing blues. The last day was therefore ordeal-free.]

On the second day the uncouthness disappeared. In came a new party of about thirty young ladies accompanied by a lone teacher. This was a Geography excursion. The teacher – I have forgotten his name – was a popular private tutor. All these girls attended his ‘coaching class’. They belonged to different colleges of Calcutta. The evenings became cultural and we, from the safety of our cottage, watched the songs and dances and recitations and felt that life was good.

My bubble burst first. It was so discovered that a few of the girls belonged to the institution I was teaching in! Since I have always had this strict rule regarding students, I had to switch to the teacher mode. The girls (as I discovered through other channels later) also had recognized me and I was instantly bracketed as an Elder! The other three did what their hearts dictated. My lone voice of sanity was disregarded with disdain.

By the way, Satyajit Ray fans need not be disappointed. We did think of Hari, Aseem, Sanjay and Shekhar.

It was decided that I was to be Sanjay. You can guess the other parallels from the photographs.

What happened next is not difficult to imagine. Since all the three are now well established professionals and married, I cannot give you much detail. Let me just say meaningful glances were exchanged, letters changed hands, romance bloomed under the mountainous moon. Two achieved some success. However, one of them did not develop. Primarily because I decided to cut the trip short by a day as another group of boys invited us to share their jeep to Purulia and I accepted the invitation. My Elder voice preferred an early retreat as I could foresee difficulties in my professional space with the target of this friend’s affection being one of those who belonged to my institution. The second successful one had already secured a date. The third person was happy being singular.

To draw a close to this story of youthful romance let me briefly narrate an incident that took place about a month after the trip. The friend who had secured a date went on that date. For the second date he was invited to the girl’s house. He went to the house. In that house my vertically-challenged friend was interviewed by a then-typical Bengali patriarch figure – the girl’s six feet tall grandfather in classic dhoti and punjabi – whose central argument was that he wanted an immediate betrothal and a house-husband for his grand-daughter. I don’t know whether it was a strategy to scare my friend off or not, but it worked like magic. My friend had to use all his wits to avoid that apparently instant marriage. He was traumatised and managed not to fall in love for almost a month. Let this be a warning to all those who are too eager!

With all this happening we did not manage to do any sight-seeing. We went to a couple of hills.

But we spent most of the time in and around the village.

But it was one of those trips which remain with you. Life was simple. We were all looking forward with uncertainty, but there was no anxiety. Almost two decades later, with all of us more or less where we wanted to be, those days look idyllic. Childhood had ended, adulthood was beginning, and we thought we will always be young. We were right. With such friends around you and such memories, you never grow old.

One thought on “Old Times”