The line of cars seemed endless. We were on a ‘Share Jeep’ and was stranded about two kilometres outside Rudraprayag. It was after 1 p.m. and we were famished. And we found necessary enlightenment from a man wearing saffron – he told us we were truly in a jam. Apparently there was a scuffle between some drivers and some policemen and traffic as we know it might never resume! Our final destination for the day was Ukhimath. We had no bookings and had to arrange a lot as our planned trek started the next morning. So we bid farewell to the driver and started walking. We walked to the bus stand (more or less downhill, so no problem), then we had to walk for about another kilo crossing the bridge on the Kedarnath Road. Then the wait began. Lunch was some heavy dark sweets and water. After a while a bus came with the promise of our destination.

In Ukhimath we found a room (not an indecent one) in Deepak Lodge. The reception was a grocery shop and the shopman assured us he will find us a porter-cum-guide. During dinner we were told that at Ransi someone would be waiting. In the morning we boarded a jeep bound for the end of that road (the road stopped about a kilometre further from Uniyara then) via a lovely village named Mansoona. Before boarding the jeep we were introduced to a young man – our guide. The man in Ransi was no longer available. I asked his name, but didn’t quite catch it. So I applied my usual strategy. I asked “What do I call you?” His reply was “Taju”. Little did I know that this boy would become family.

Our aim was the holy settlement of Madhyamaheshwar (locally pronounced ‘Madmaheshwar’), a four day trek (to and fro) of about 38 kilometres. Nowadays the trek starts from Ransi taking away three kilometres from the total trek. Ransi was a beautiful hamlet then. Calm, quiet and completely centred around the Rakeshwari Temple.

But now it is dirty and dusty with smell of diesel and technology. Very soon the road will reach Gaundar. But I was assured that the lovely path (the one taken) will not be a thing of the past. The metalled road would go through a different route. The old one will be available for the mules and for people who love to walk.

The road would be a necessary advancement for the villagers, it will connect them to the town and all the amenities including healthcare.

Till Octoli Khal the road is pleasant. 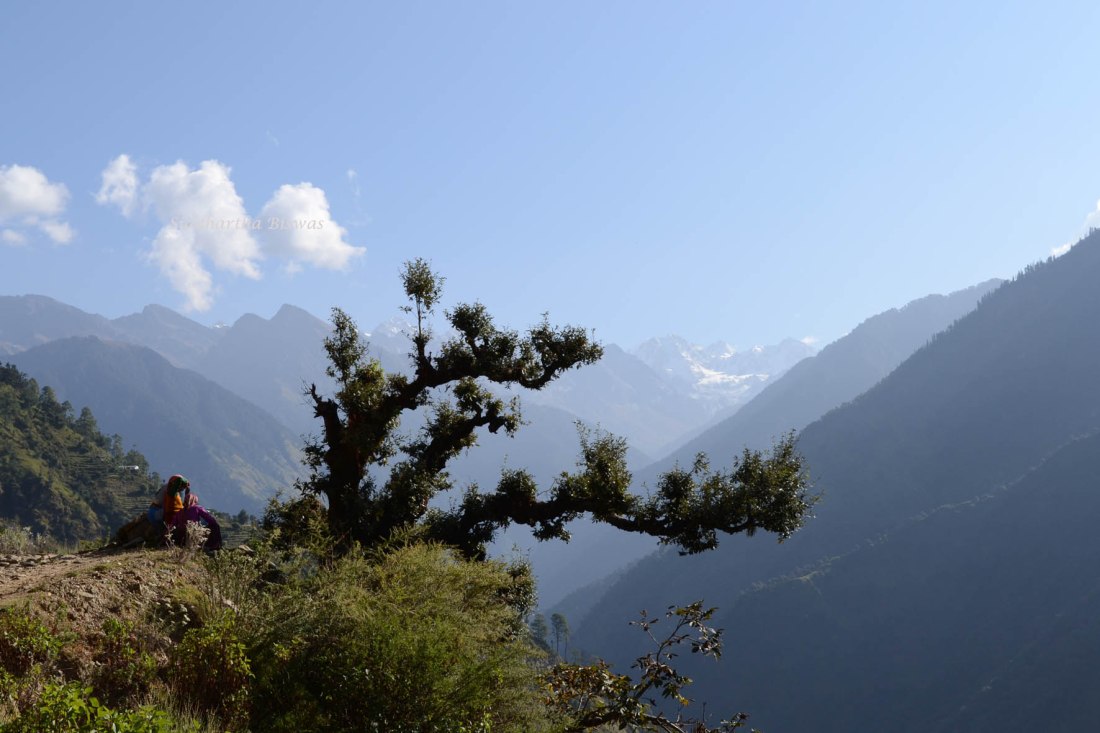 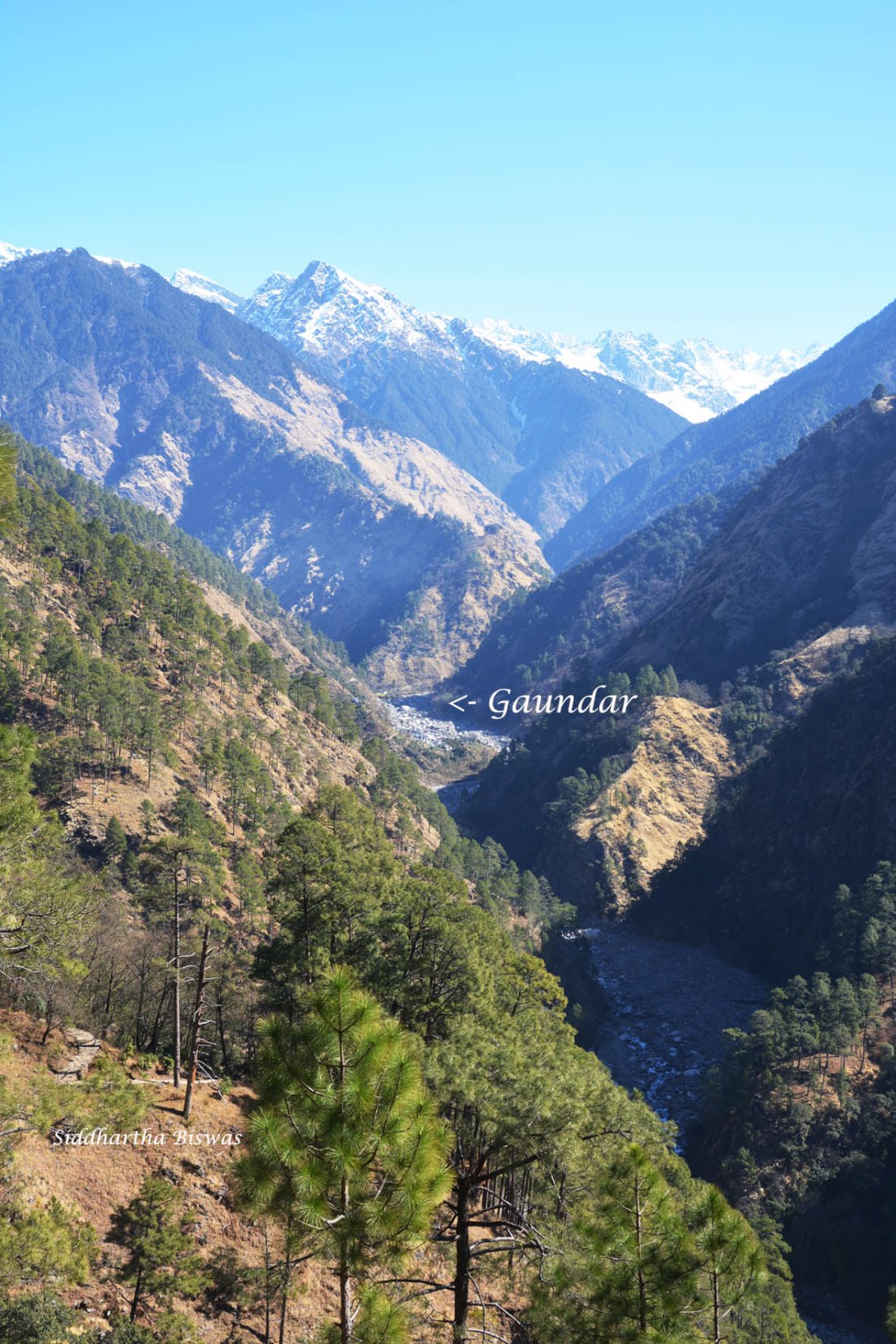 By the time we reached Gaundar I was spent. Taju went to meet his mother. We trudged on. About a kilometre from Gaundar you reach a spot which used to be heavenly. It is the confluence of Madhymaheshwar Ganga and Markandeya Ganga and a small bridge took us to a brilliant Ramdana field. This was where Umaprasad Mukhopadhyay had made his hut. The hut was there during this trek, but the recent ravages, particularly that of 2014, destroyed the whole place.

(Madhu Ganga as it was a couple of years back. This used to be a lovely little stream)

The last time we visited we could hardly recognise the rivers or the place – the destruction that nature can unleash is simply nightmarish.

(This river was another small happy stream, the anger that can be seen was absent then)

Speaking of nightmares, the path from this confluence (visible in the photograph above) decides to test you. On that day, end September 2011, at the end of the 10k hike, I looked at the path going straight up with a gradient of a kind where there is no kindness. It took me twenty minutes and six stoppages to climb that half kilometre to Bantoli. Jaya reached in a jiffy and Taju overtook me with an ease that made me feel one hundred and eighty years old. (For those who might wonder, I am two hundred and eighty now.)

(The bridge from above, and you can see the river as it was earlier)

Technological advancements were a big help for us. Taju had called earlier and Anil Singh Panwar-ji of Vishwa Lodge had kept one of the rooms on the upper floor for us. This lodge has three rooms on the first floor.

And I desperately wanted one as these are the only ones with attached (though rudimentary) toilets. We had also pre-booked rooms at the Mandir Committee Guest House at Madhyamaheshwar (via a man who takes flowers to the temple every morning). It was not for attached toilets, but for ‘a’ toilet.

At that time the Guest House was the only one with a common toilet. You had to bring in water from a nearby supply. The seven or eight other establishments allowed you to attend the call of nature in its very lap.

Not that that is a tremendously problematic thing, but imagine a dark morning, with a jungle full of bears and the temperature in the zone where everything freezes, and you would sympathise with my need for such luxury. In fact, we did manage to get the room my friend Ritwik had suggested – the one above the kitchen. It remains warm throughout the night. And throughout the night I listened to a ferocious tussle between what I imagined was a bear and one of the bearishly large mountain dogs that zealously guard humans. Never for a moment did I feel the need to go out and investigate.

Anyway, I am getting ahead of the story. From Bantoli to Madhyamaheshwar the 9k hike is the stuff of dreams that fitness freaks have. The first eight kilometres are incredibly steep with the Nanur region being the steepest. The last kilo is more or less peaceful. We stopped everywhere. We had a light meal at Khatara where Taju went in the kitchen and sped things up. Then we had tea at Nanur. From Nanur to Maikhuma the track was brilliant. It seemed like the world had only the two of us. Taju kept a respectful distant. He only came to my side when he sensed I was nervous. The path was quite narrow at times, something that did not go well with my vertigo. There was no human being around for kilometres. Very few journeys give you such peace, such blissful loneliness. You can be you amongst those magnificent mountains. You feel nervous, not being used to such a feeling, but they give you peace. These moments come only a few times in our lives.

In Maikhuma there was a solitary hut. We found a lady who gave us some tea.

Taju told us she had lost her husband the month before as the “poison pouch” in his abdomen had burst. Jaya realised it was probably a case of ruptured appendix. For these people even simple diseases turn into terminal ones. A proper road and vehicles mean life to these people.

Stepping into Madhymaheshwar was such a soothing feeling. The temple, like all in the region, is built of stones not found anywhere nearby. It is a mystery how these temples were built. One of the best things about this settlement is that you have very few tourists here. Perhaps 20 outsiders can be seen on a crowded day.

The Arati was lovely with one jarring note – the priest opened with a plea for money! The South Indian priest explained that his income was meagre in this posting and we should be generous. I failed to feel for him. There are priests, then there are priests!

Early next morning we started for Buda Madhyamaheshwar. There used to be a proper path, but it is all broken now. Legend says that the temple was meant to be built there, but the absence of water forced the past fathers to come down a kilometre where there was a stream. But the place is marked and a shrine still stands. Against this shrine you can see the mighty Chaukhamba standing with imperturbable dignity. 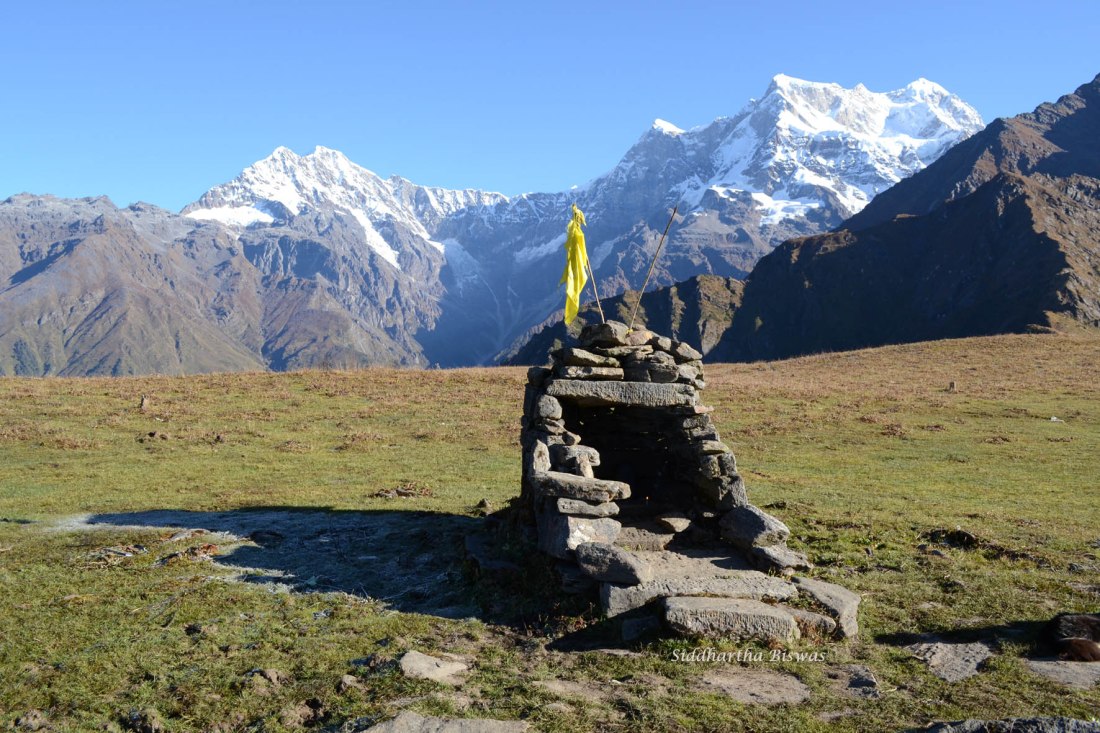 In fact, there is hardly a hill in between. Chaukhamba is literally the next peak.

We came down because time told us to. But we wanted to stay.

Hiking down was not easy. My expensive Adidas shoes gave up. I had to keep body and sole together with leukoplast wrapping. We came across three young ladies who were lambasting their friend who had promised this was a walk in the park! We also came across three ladies of advanced years – they were thoroughly enjoying the journey. They were unafraid as their faith in the destination was absolute. On our way down we stayed at Bantoli again. Incidentally, Anil Singh-ji had not taken any money from us on our way up. He had told us we can pay on our way down. When someone trusts you like that, can you breach that trust? We spent a peaceful night enjoying his hospitality. The next day we returned to Ukhimath. We found time to visit Taju’s house and we met his family. The village was solar-powered and charming. It still is.

The tea and chapatti that I had there was probably the most delicious I have ever had.

While bidding farewell at Ukhimath Taju said he will save my phone number under the name of “Sir-Ji”. I objected. I told him to save the number as “Siddharth-bhaiya”. It is my honour that he accepted.

I have visited all the five Kedar shrines, but Madhyamaheshwar has a special place in my heart. I will not be able to explain this. But it is as if I have left a bit of myself there. Seven years have passed. My body has become weaker. But I will go back. I must. Madhyamaheshwar keeps calling.