Yumesamdong or Yumthang, apparently meaning ‘valley of flowers’, is not only brilliant, but thrilling. The popular myth says cars regularly topple on the way killing a decent number of tourists every year.

So you can imagine just how excited we were, and with Prem driving, this became even more stirring. The scarier the path, the more confident he became. It seemed that hugging those impossible curves on those hellish roads was the ultimate aim of his life.

The day was cloudy. When we reached we didn’t find clear blue skies and glorious mountains, but the place is divine and we were happy not to be another statistic on some morbid record.

The river was beautiful and there were lots of rhododendron and other flowers.

Colours work best in smoother light. So we forgot the pathetic path and concentrated on clicking.

A note should be added here. Just before coming to Lachung I had noticed that my camera is not behaving well. And I soon found out that most of the photographs are either out of focus or agitated. So I had to be ultra careful. As it turned out, the VR (Vibration Reduction) mechanism had been so scared of the road that it had quietly resigned its commission, leaving me and the camera quite shaken! It cost me almost ten grand to bring it back and it was much later that my compositions regained composure!

After half hour in Yumthang, Prem told us we will now go towards Zero Point. The roads on the higher altitudes were far worthier!

And the terrain was magnificent.

There were a number of military installations on the way.

We reached under the cover of a dense fog. Visibility was minimal.

There was a large crowd here too. And a little wooden footbridge took us over a stream to a land of snow.

It was freezing and we had weird snow boots which did not inspire much confidence.

So we spent the minimum photographic time there and promptly crossed back to the polythene shanties that provided us with lovely warm Maggi and boiled eggs.

Nourishment of the liquid kind was abundantly available and thirst seemed to be very popular; but their questionable origins kept us strong in the face of temptation.

On our way back we were treated to a lovely view of the valley. 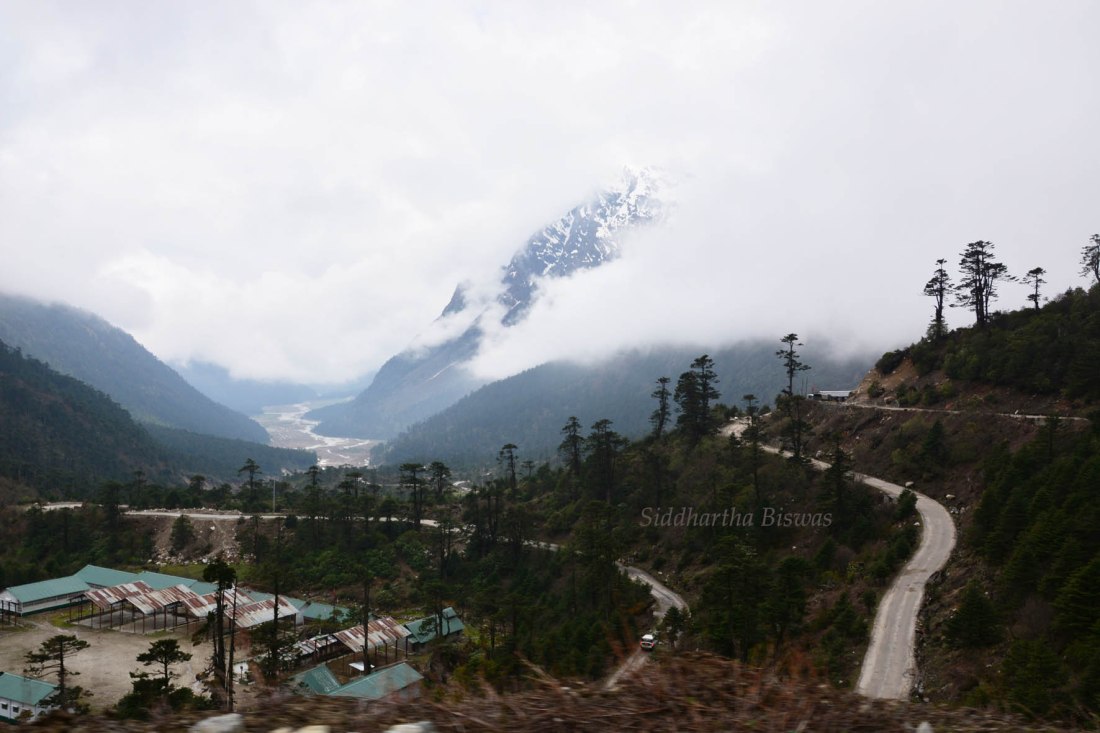 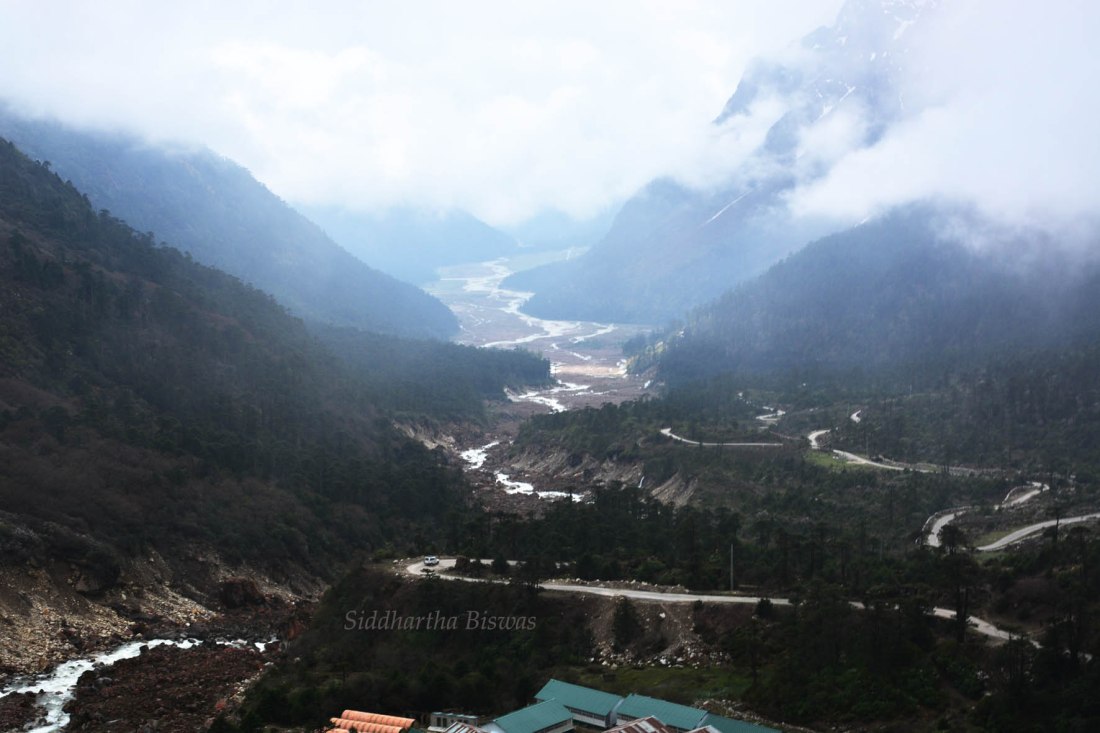 When we came down to Yumthang the cold seemed friendly. And Prem promptly took us to a rustic teashop.

It wasn’t actually for us. It was because to and fro, the whole two hours, he hadn’t smoked. And in his life, cigarettes outnumbered words. I hope he has found enough prem for himself to give up.

Lachung is the base camp for any expedition to Yumthang. Our hotel in Lachung was on the Katao Road. It was on the other side of the river. Jaya hated the hotel. It was not ultra clean and the dining hall was a dark room with unclean plastic tables and plastic chairs. Sartre would have written a different version of The Flies if he had visited this place. And the two nights we had spent there had two lovely and long powercuts. So we had terribly unromantic candlelight dinners sharing the table with other hysterical and vociferous tourists. There are some people who just can’t do things without yelling their heads off; and our fellow diners would have infuriated them. But I believe it was the presence of the leech in the room that was the last straw for Jaya. She isn’t a person to complain for nothing (unless it is one of the trillion things that she thinks is wrong with this world). But her dislike was cemented after I played the part of leech gatherer. Let me clarify this point: she does not fear leeches in the least. It is the principle that bothered her. Leeches are fine in nature, but not in such an expensive hotel room.

I loved the hotel. Not because of the leeches though! I loved it because it gave us the view of an amazingly high mountain with a hollow top where I could see four or five waterfalls nourishing what I guessed was a lake. The lake I could not see.

The top was probably unreachable; at least the slopes of the mountain promised such. But humanity is capable of all kinds of nuisance, so I did not ask.

Lachung monastery was just quarter hour’s walk and there was a lovely bridge looking at another magnificent peak.

We could not go to the bridge as rain started with great enthusiasm.

This rain prompted us to decline Prem’s offer of going to Katao early in the morning. As it were, we had reports from other sources that access to Katao was denied because of the weather. Prem’s idea was to literally take us for a ride. He was somewhat disappointed that we did not agree. This journey would have meant an extra (and handsome) amount of money for him.

That night, in the shadowy flicker of candlelight, Prem proposed that we will leave at 6 o’clock in the morning. We have no problem with such timing. And reaching Gangtok early is never a bad idea. But when we asked about breakfast the hotel people were surprised. They asked if we had some appointment or something. When they found out it was Prem who seemed to have a rendezvous, they were quite annoyed. They said we should not move out before 9:00 in the morning, and only after having the breakfast we have already paid for (this was a customised ‘packaged’ tour). But we still thought we should not further aggravate the man who had the wheel of our fate in his hand. His driving when happy was rather distressing for us, if he was unhappy who knew how he would make the vehicle behave. So we were up around 4:30 in the morning and ready by the designated hour. Prem was nowhere to be found. After an extensive search he turned out to be smoking with a number of his friends.

He informed us rather impassively that the road was closed. Until it was cleared we would have to wait. Around 7:00 a number of cars could be seen entering Lachung. He said they were all local cars. We had our breakfast at 8:00. By 9:00 we were positively restless. He was as calm as the hills. At 10 my patience was gone and I told him we will leave, no matter where we get stuck. He agreed, not without resentment.

There were no problems on the way.

However, throughout our journey I could see that heavy rains had taken a great toll. Waterfalls were full of muddy water and there were landslides all around. In fact, we saw a couple of actual landslides in the distant hills. The rivers were all swollen.

The entire high north was on high alert. It was a nervous journey. Roads were wet and often had parts washed off. Prem had to drive slowly and even he did not stop to smoke until we reached the lunch place. By then the topography was normal by hilly standards. The altitude was no longer problematic. We reached Gangtok without further incident. And as we found out later, the entire Northern Sikkim had become inaccessible due to heavier rain by midday that day. If we had stayed in Lachung for another two hours, we would have been stranded. I am sure Prem would not have wanted that, but those four hours of irritation is what I call ‘Prem’s Revenge’ (something I have mentioned in an earlier post as well) and I shudder to think what would have happened if we had been on the road when the catastrophe happened. I hope there was not much damage to life or livelihood.

North Sikkim remained unconnected for about ten days after that. We were indeed lucky to have escaped just in time. Those who were stuck were in for a very difficult time as everything had become scarce after three or four days. Even basic supplies could not reach the entire area. We may romanticise, but such is life in the high mountains!