The bus rolled on gently, Yolanda’s gentle and calm voice continued the narration in German and English. She was a portly lady in her early fifties. We moved past major landmarks like Hero’s Squire, the Hungarian National Gallery, Dohány Street Synagogue, St Stephen’s, famous cafes, all the iconic spots in the city, but the bus showed no intention of stopping.

We had travelled for 15 hours to reach Budapest and had a night of gentle but inadequate rest; so the soothing voice, the luxurious seats and the slow motion made us quite heavy-eyed. Looking dreamily out through the glass windows Jaya and I thought this was a huge waste of money. A walking tour would have been much better. We would have had freedom. All those interesting hop-in-hop-off tourist buses that crossed us (the city is full them) seemed to mock us. 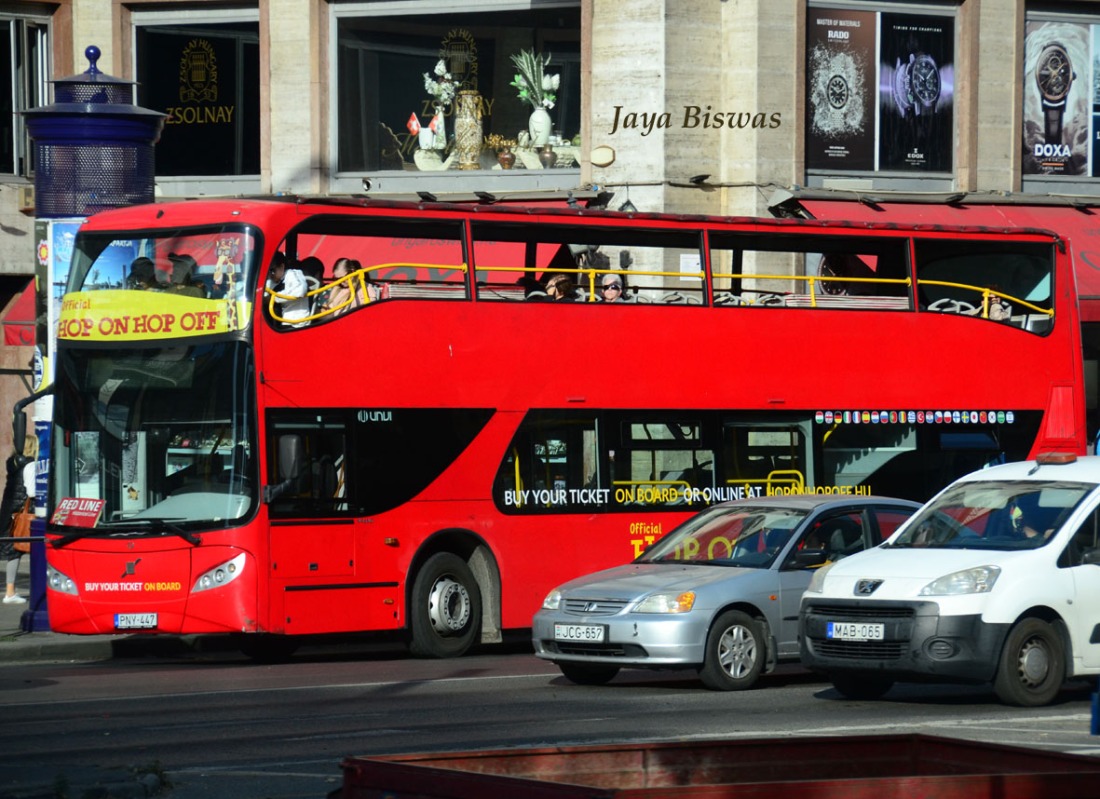 Then the bus swerved and crossed the famous Széchenyi Chain Bridge. We were leaving Pest and entering Buda. In a little while, the huge luxury bus carefully negotiating the narrow zigzagging hilly roads, reached Gellért Hill.

Then the bus finally parked next to a number of similar buses. 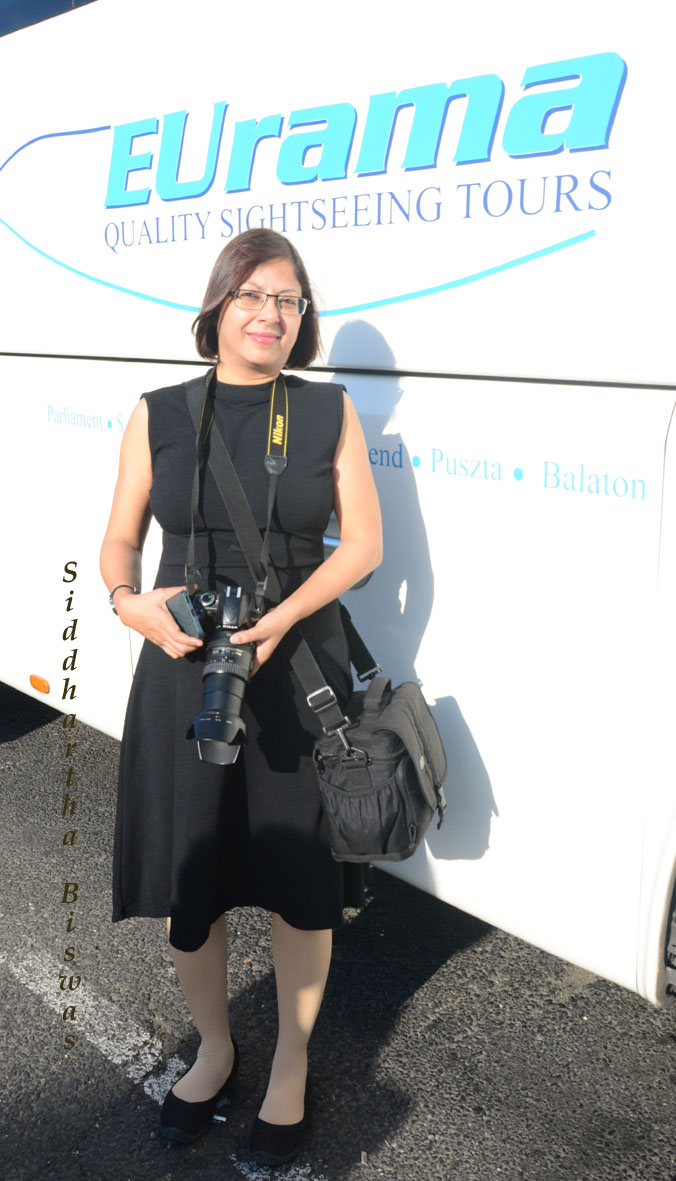 We were given 25 minutes of liberty. We had already seen the Liberty Statue from a distance. Now we were going to see it up close and personal. But before we crossed the Gellért Citadel we had this magnificent panoramic view of both Buda and Pest. Colours of the Fall made the view even more beautiful. 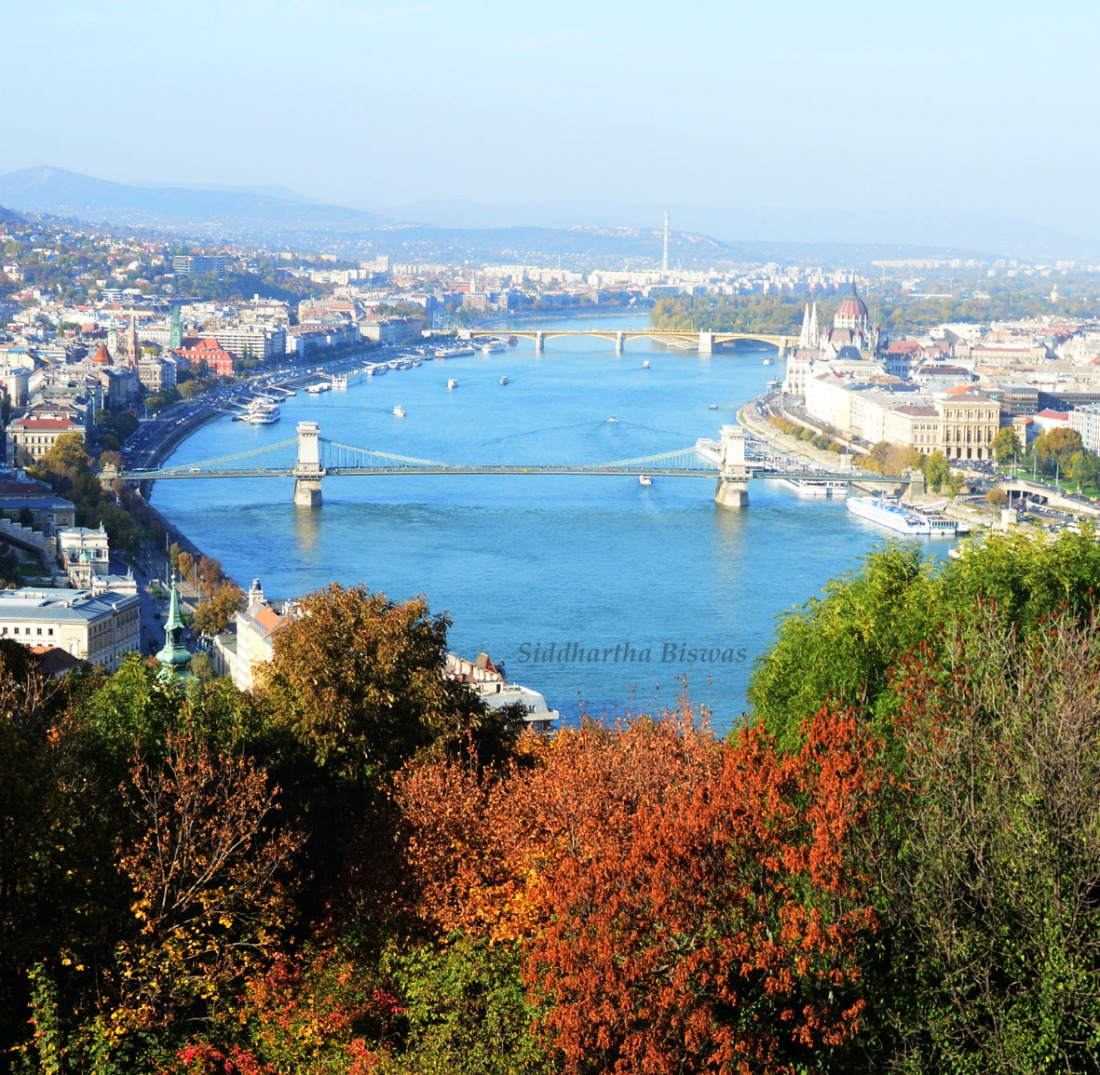 We could see the Chain Bridge and Margaret Bridge (incidentally, these were the two oldest permanent city bridges) in the distance. Margaret Island was in its full Glory and we could see the steeples of Saint Stephen’s. The Budapest Eye was also quite prominent. 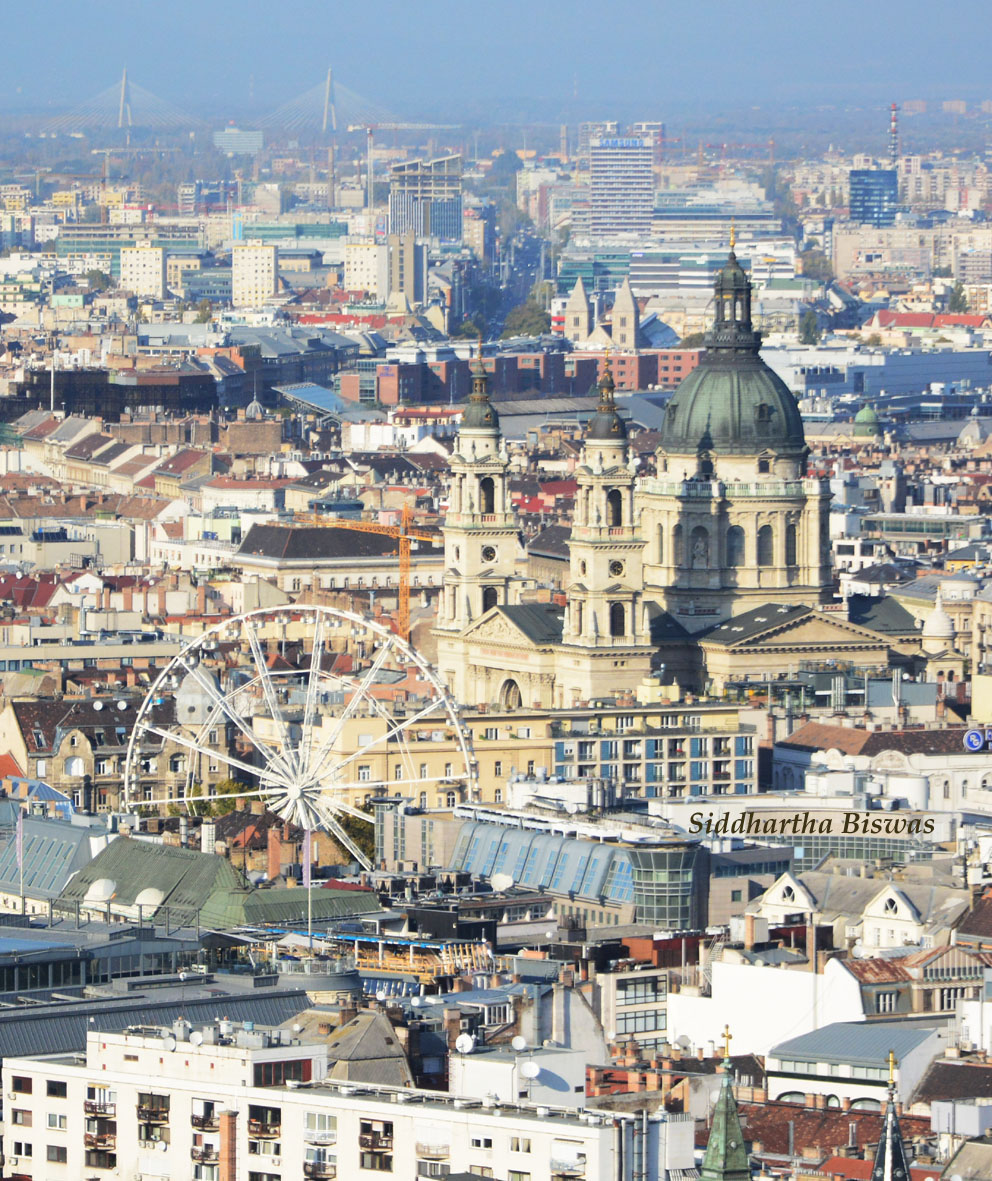 The Buda Castle as well as the Parliament House was a part of this brilliant landscape. This was a pleasant afternoon and we hurriedly looked at the Liberty Statue along with its accompanying figures. 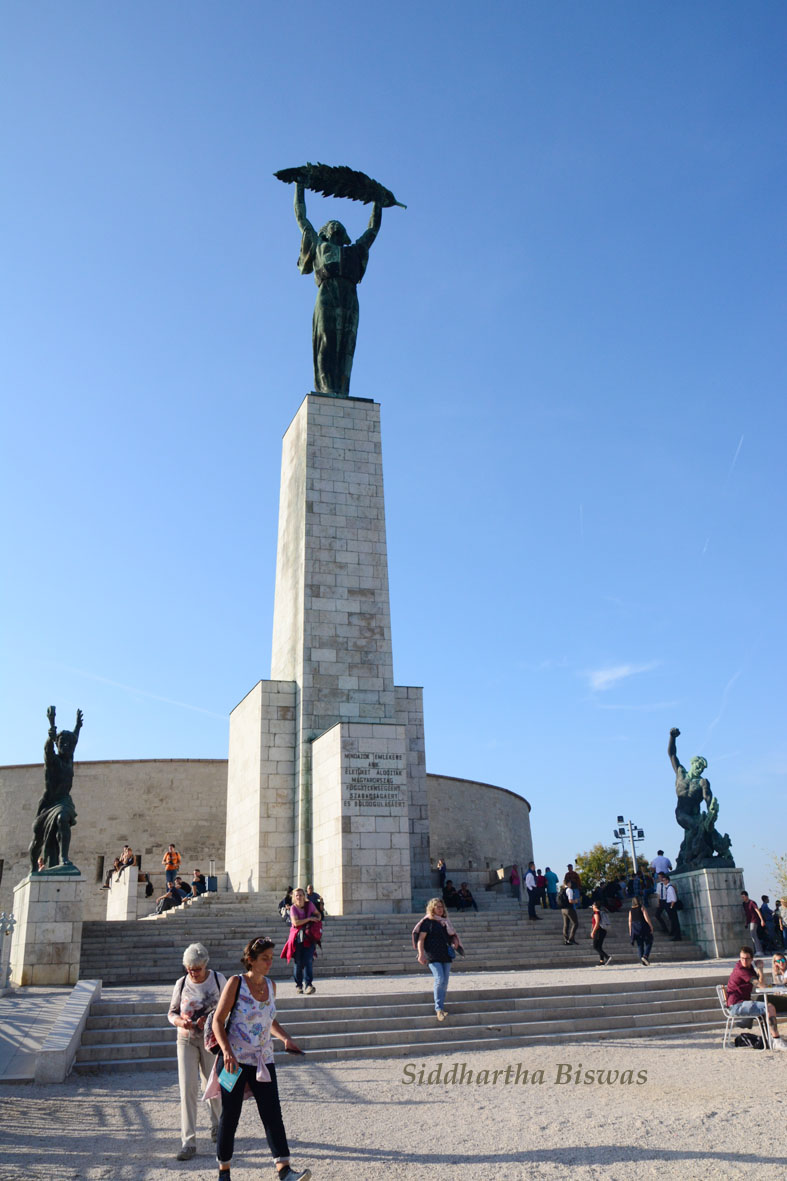 We just about managed to circle that Citadel and reach the bus in time. 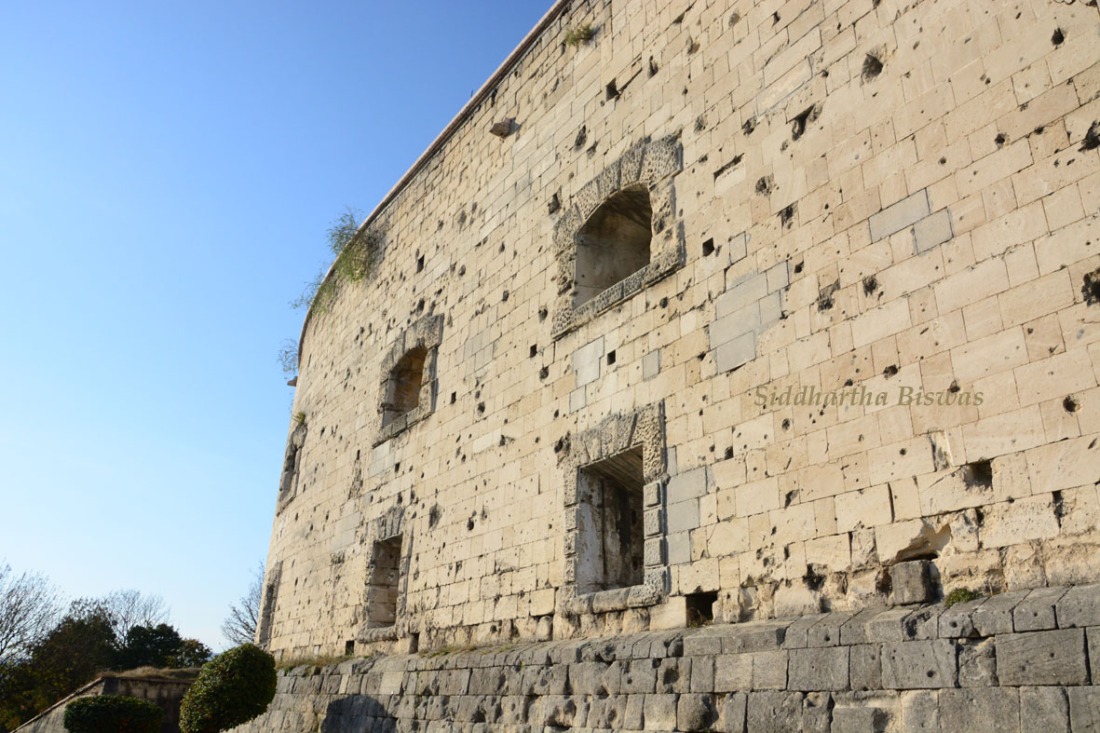 It was a relief to see that we were not the last. There was a couple of English origin who thought 25 actually meant 35.

Our next stop was Buda Old Town in the Castle District. There was a sharp division amongst the tourists in the bus. It was strictly interest-oriented. Some had booked the longer trip and some the shorter. This was the place where the shorter trip ended; fortunately we had booked the longer trip. This one included an hours’ sightseeing on foot in the Old Town. Buda Old Town is lovely and picturesque; it is a UNESCO World Heritage Site.

The bus left with the others, promising to come back to pick us up in due time. 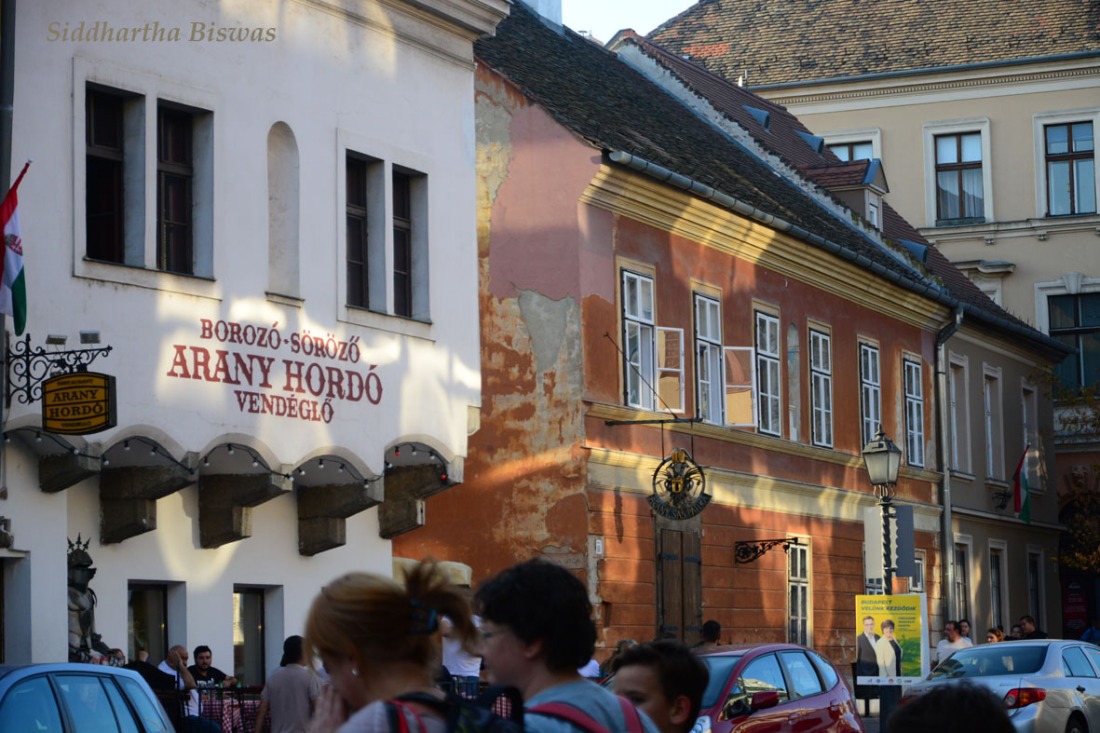 A handful of us, including the old American couple and the cranky German couple, and a few East Asian kids, and a very friendly single American lady from Brooklyn, were in this extended journey.

After walking about for quarter of an hour Yolanda offered us a tour of the Church of Our Lady, commonly known as Matthias Church. In the 15th century King Matthias Corvinus had renovated the Church in the Renaissance style. 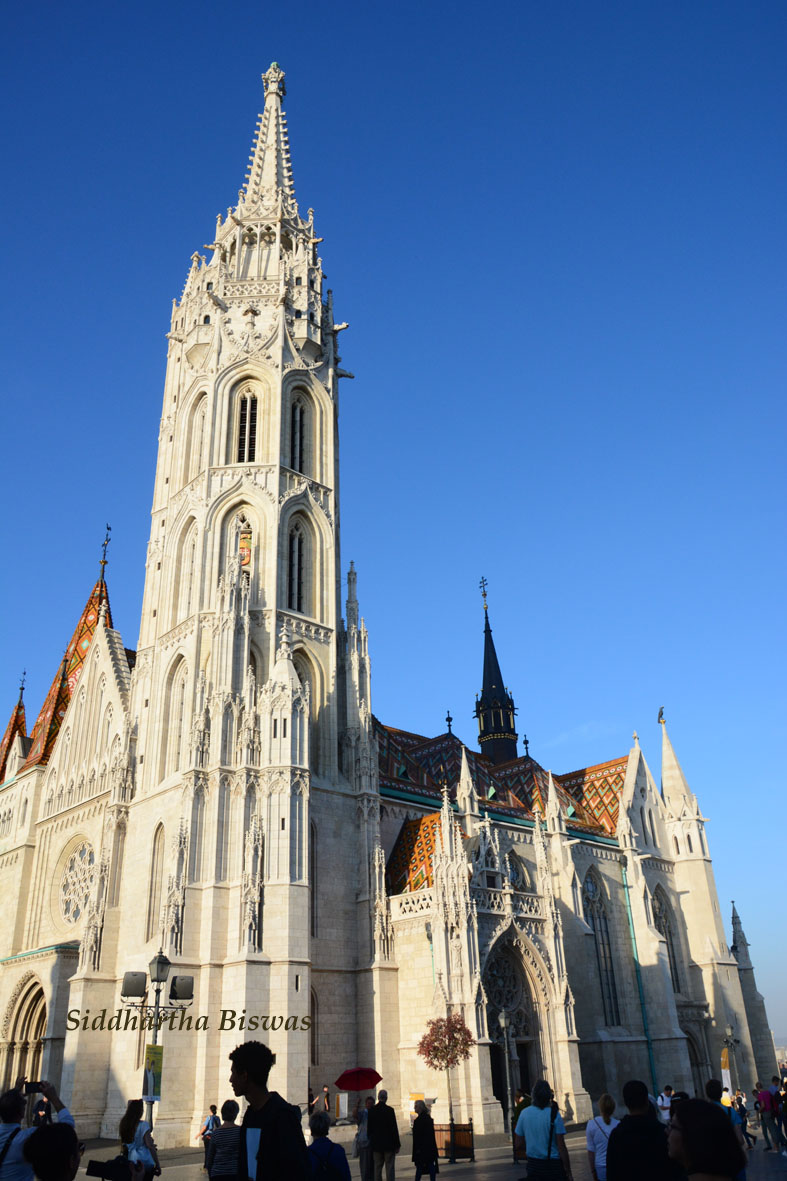 We had to buy separate tickets and Yolanda very graciously changed a 50 Euro note into Forints.

Not entering the Matthias Church would have been criminal. Not only was the inside opulent, it showed layers of history.

After the Turks had destroyed the older church in the 17th century they turned it into a mosque, the present church still retains some of the Islamic designs. 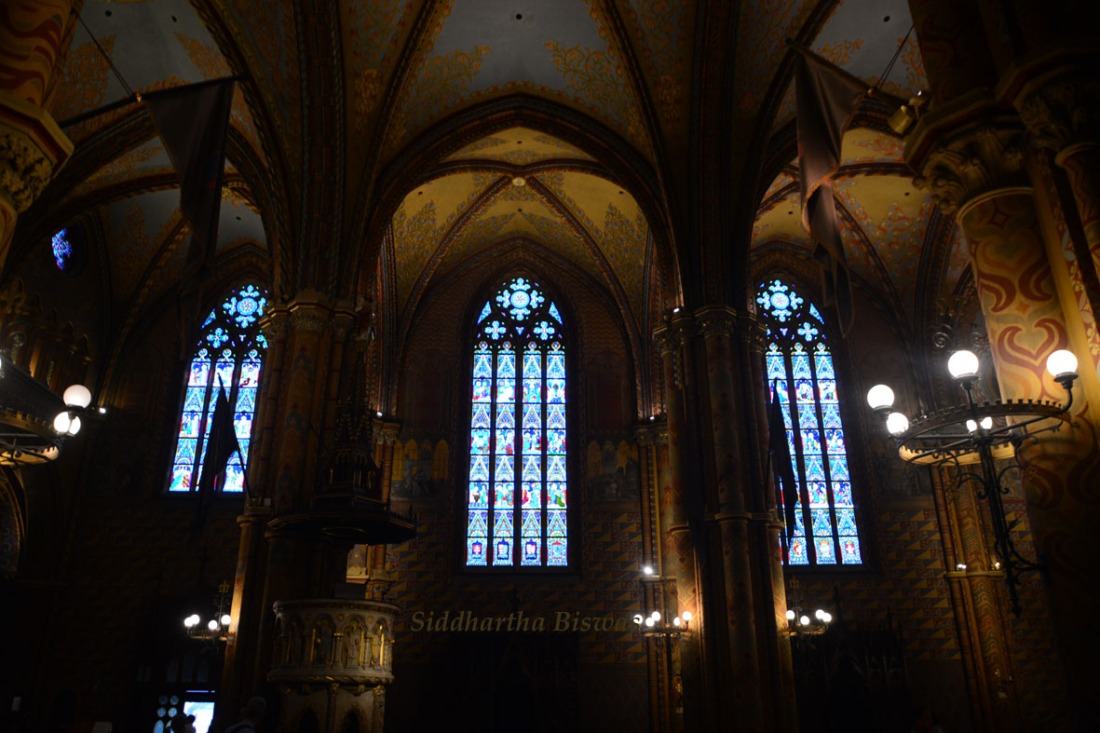 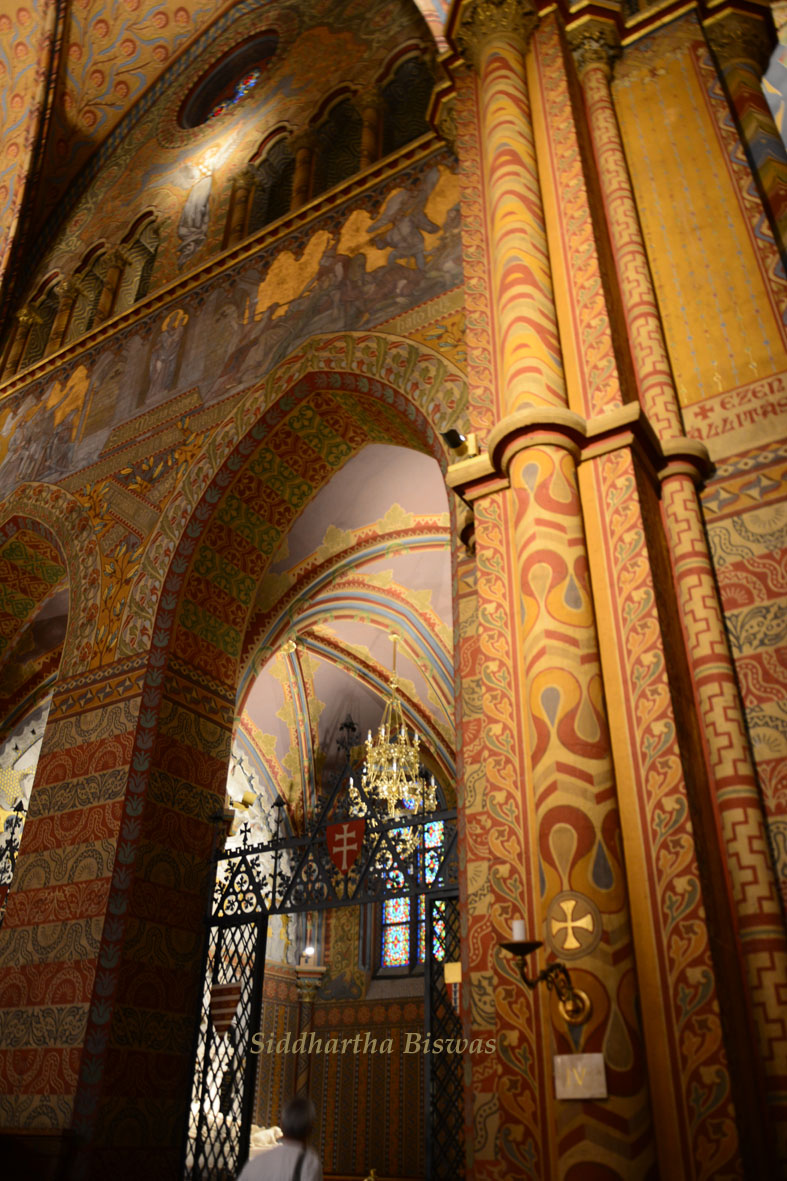 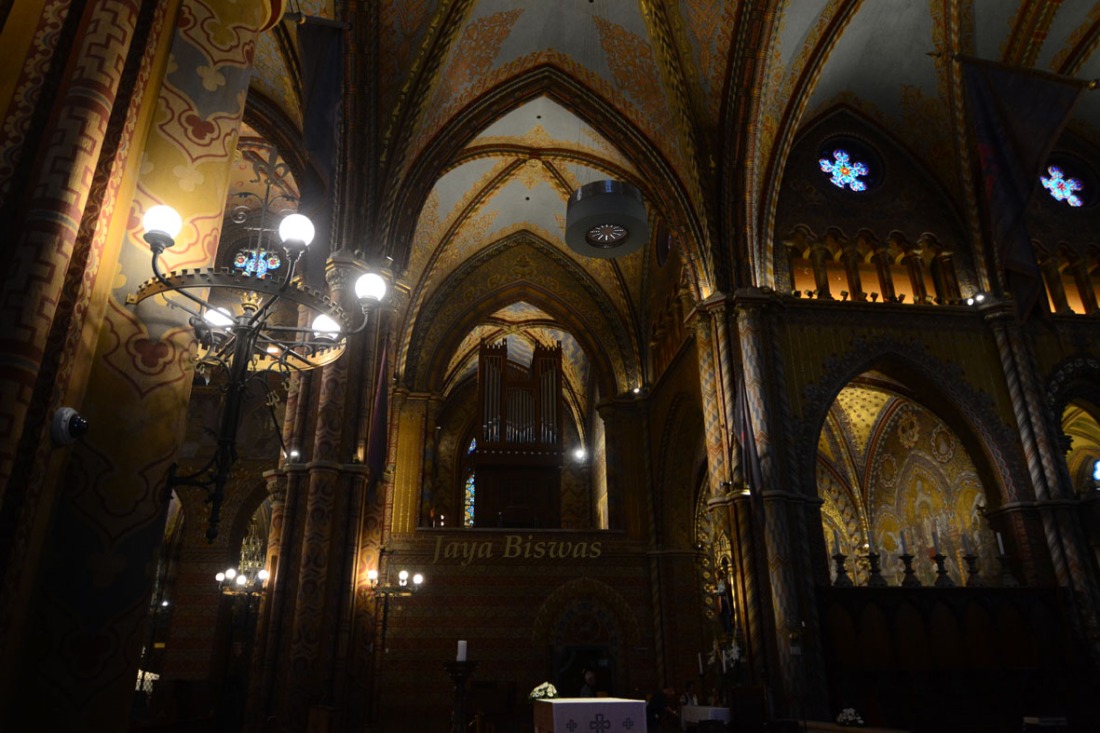 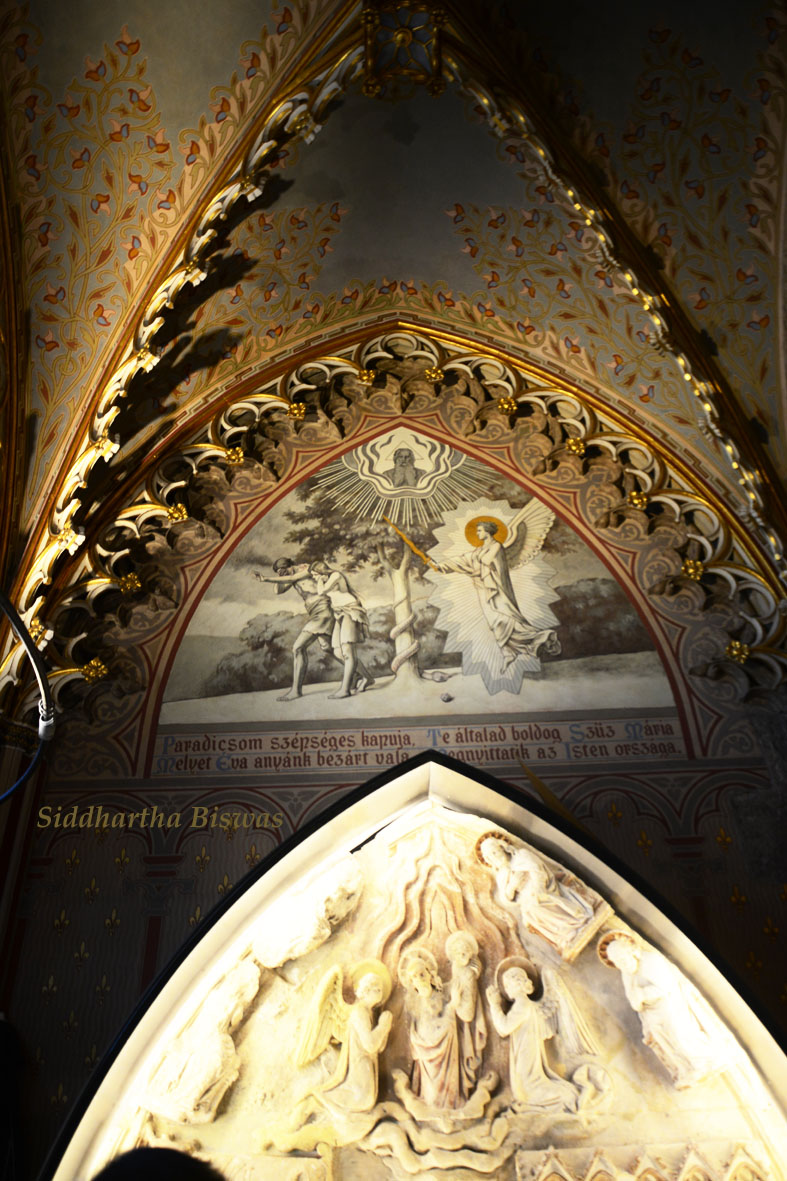 The church also contains the tomb of the King Bella III and Anne of Châtillon. 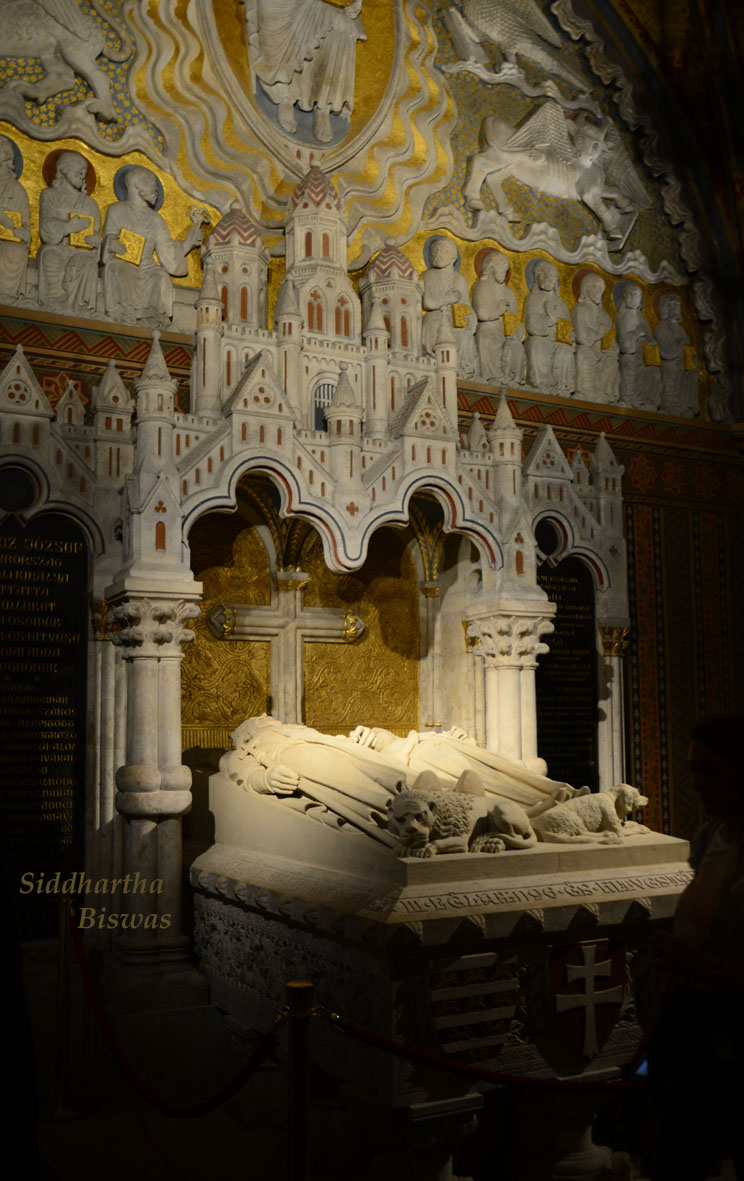 The Church is located next to the Fisherman’s Bastion. This is a fortress like wall overlooking the Danube. Built quite recently to commemorate 1000 years of the Hungarian state, this is one of the most popular tourist sites in Buda. 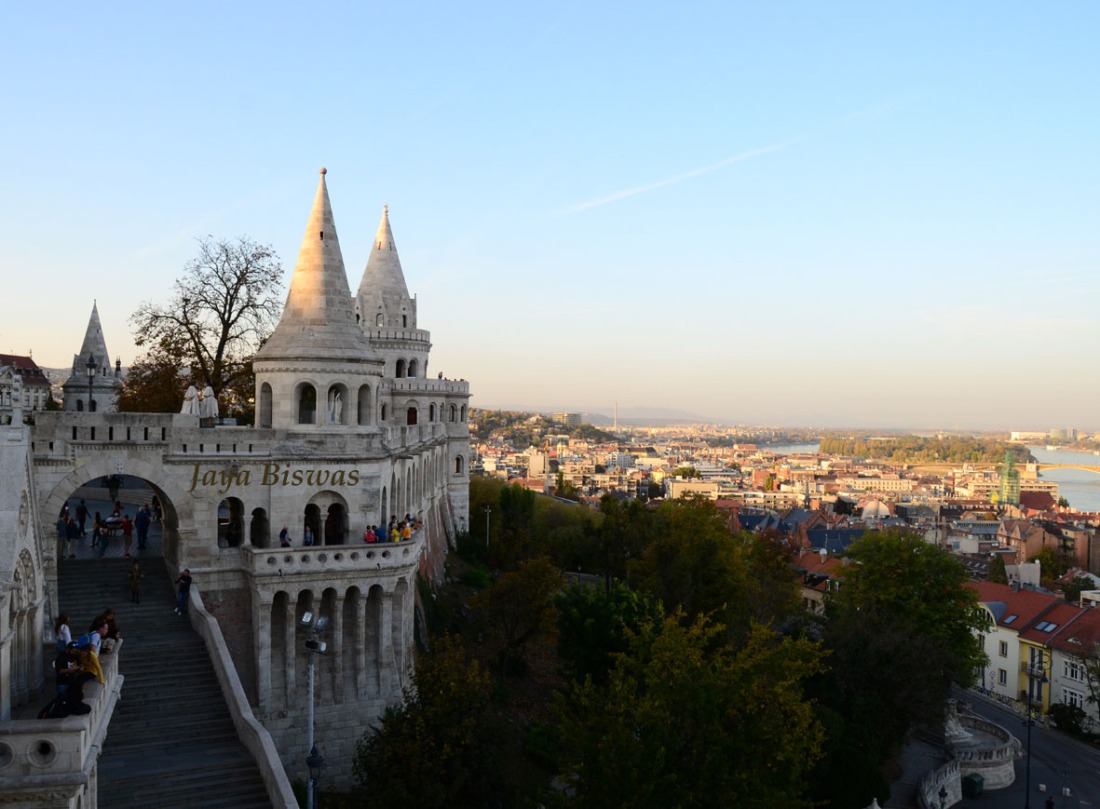 The Buda Castle looked magnificent but it was not included in the tour. 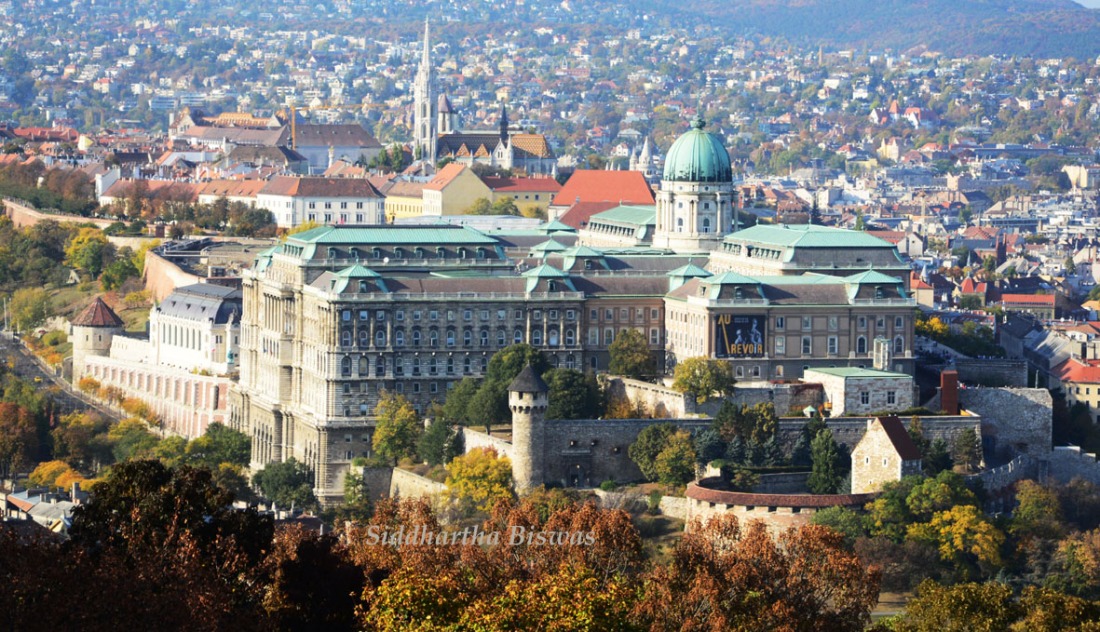 We decided to come back but never found the time. If life allows, we will definitely go back to Budapest. Buda Castle will not remain unexplored by our cameras.

The tour ended at the designated spot, near the Inter-continental Hotel. As always there was no hotel drop, though they had picked us up from our hotel. We did not mind. By this time we had gathered the lay of the land, and we walked along the Danube. The sun was setting behind the hills of Buda. 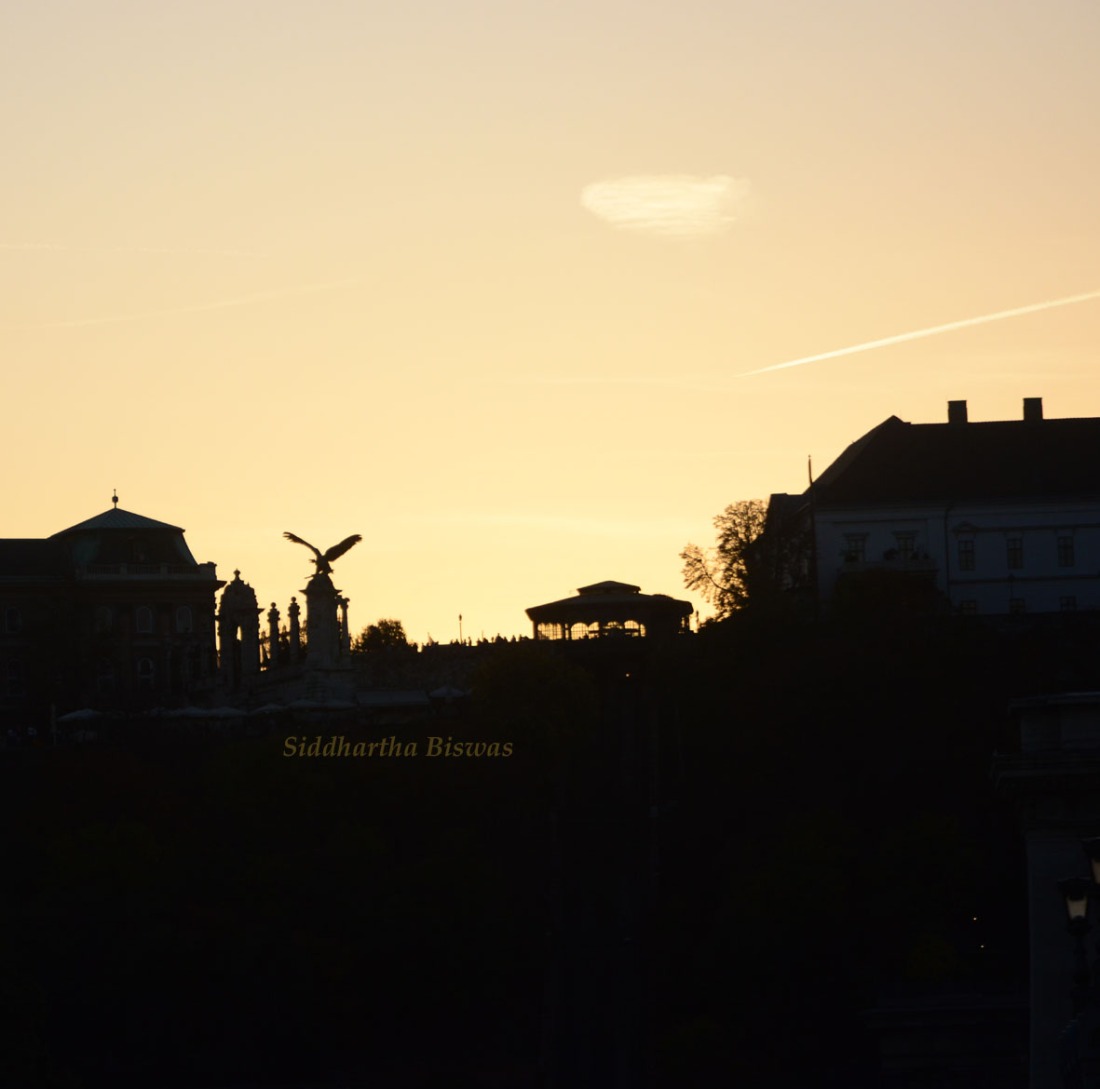 The Parliament House with no apparent ‘Z’ category security seemed imposing but not inaccessible. 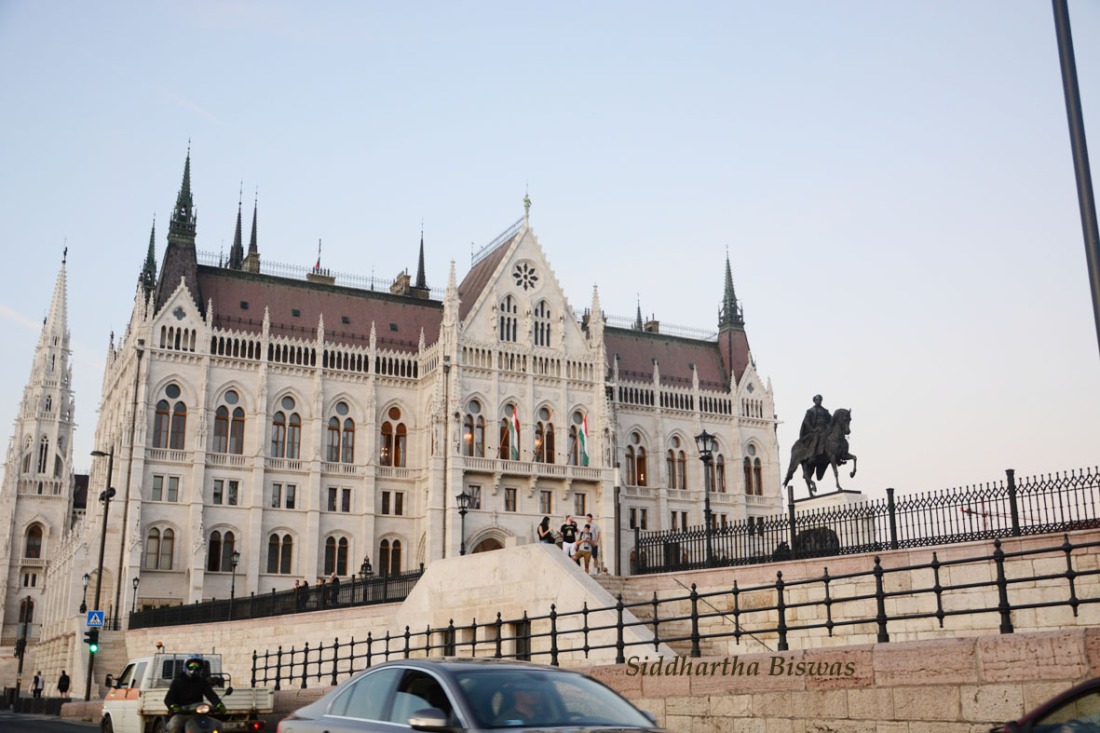 And then we reached the by then familiar Margaret Bridge and we turned right towards the magnificent Vígszínház. Just behind the Vig, was NH Budapest City, our home in Budapest.

I should, though I usually do not, write a little about this hotel. It is a businesslike structure with efficient and precise people who are quite friendly. Always courteous, they did not overdo the welcome but managed to make us feel right at home. Since I was under a lot of stress as our Romanian bookings were endangered by the Cox & Kings situation, NH Budapest City seemed like a safe haven. 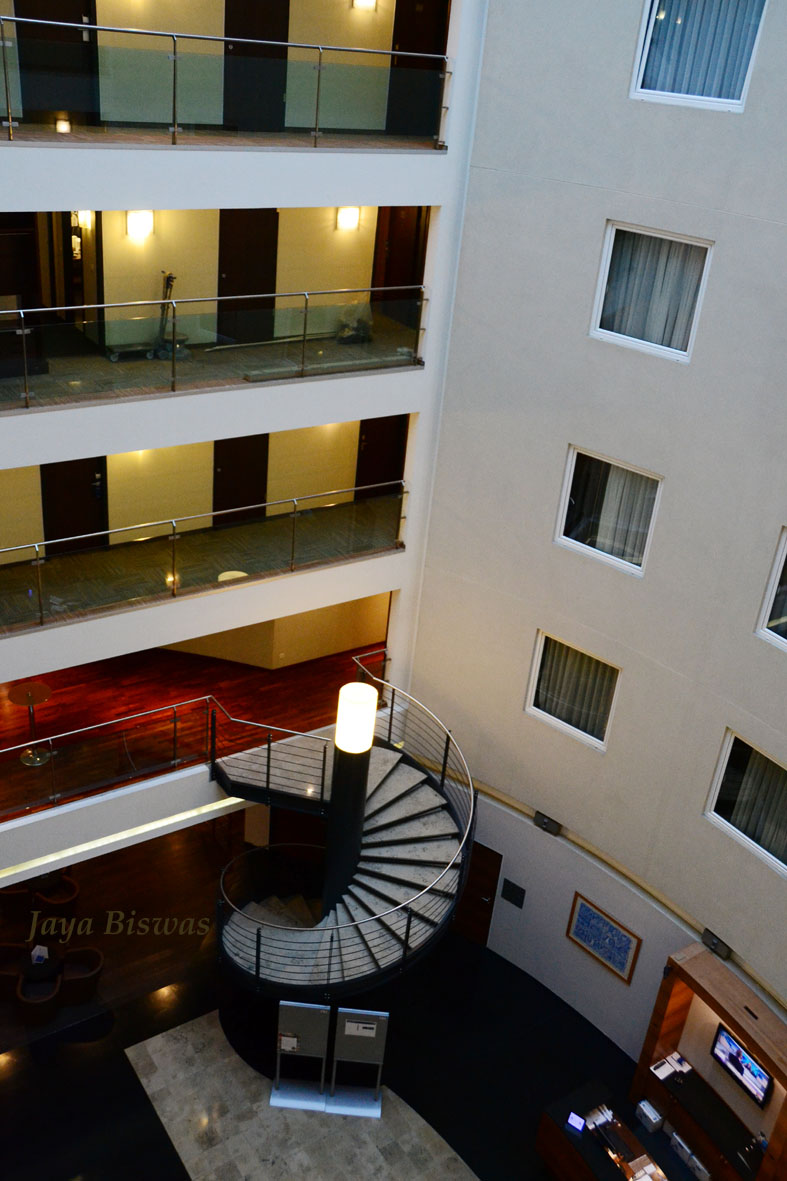 They assured me that they will have something for me if Romania proves to be inhospitable. We managed to make friends with the fine men and women who served us always with a smile, gave us printouts without asking questions and fed us an incredible amount of food. I will speak about the food separately, but the breakfast (included with our room) was the best spread I have seen in all my years of travel. The amount of food I ate in one sitting is more than what I usually consume in a week. I never ever thought I would actually go to sleep thinking of breakfast.

The other great thing about the hotel was its location. It was right where we needed to be. Just a short walk from the river, everything was in walking distance. A word of caution here, this walking distance is our walking distance. Walking for 30 or 40 minutes is not considered to be hard by yours truly. In fact, walking is the best way of knowing a place.

And all European cities have this in common. You must walk around to enjoy them and to understand them. Budapest is fair, and lovely for walking. From our hotel we simply walked for about 15 minutes and we reached the iconic Saint Stephen’s Basilica; Saint Istvan to be precise. 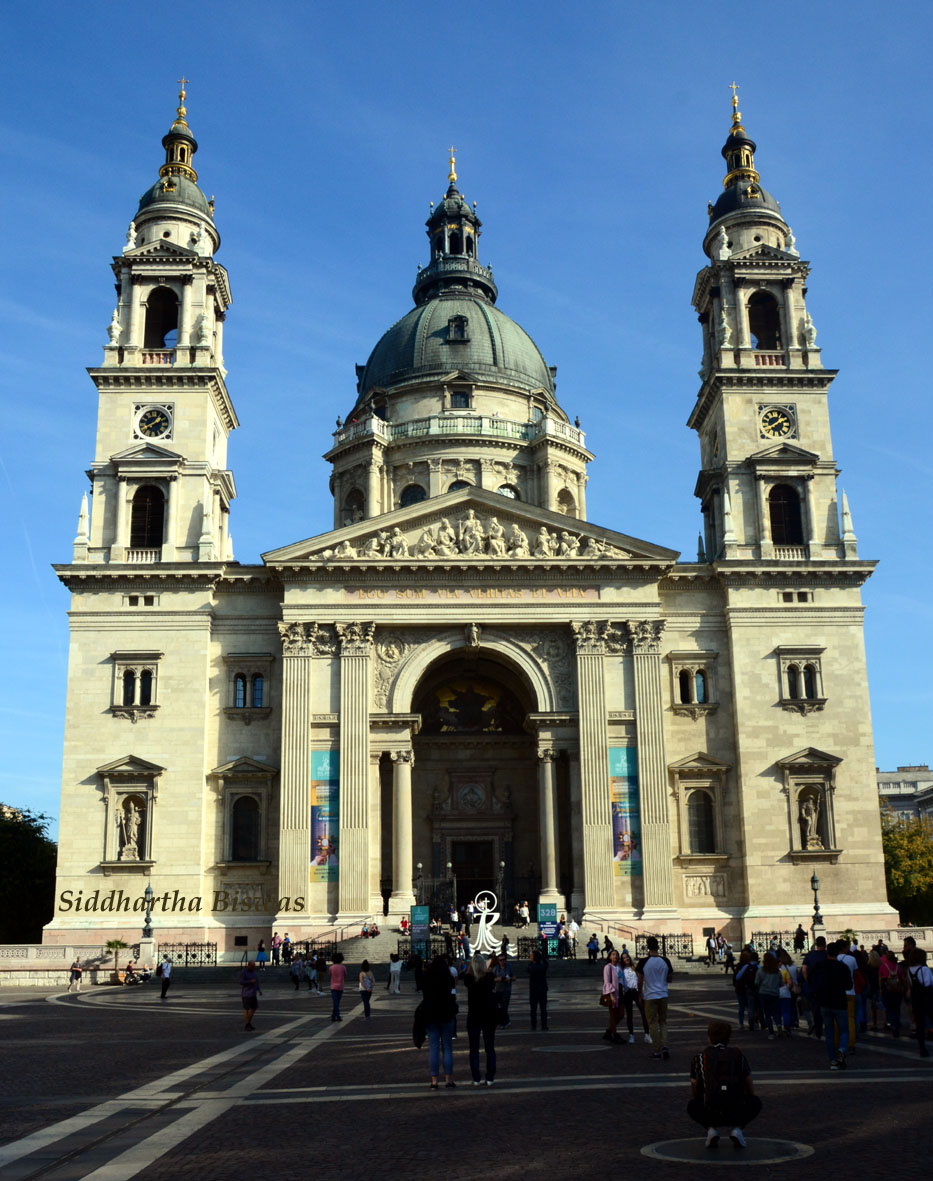 On the way was Liberty Square, with a number of interesting things including the Memorial for victims of the Second World War, the Soviet War Memorial and Ronald Reagan’s statue!

Quite a way to commemorate the Cold War! In East Europe you see a history of Soviet occupation that differs significantly from the positive propaganda propagated in our part of the world.

St Stephen’s is the biggest church in Budapest, surrounded by cafes, restaurants and gift shops, is one of the central attractions of Budapest. Another few minutes’ walk and you reach the Budapest Eye. Situated in Erzsébet Square, it is nothing like the London Eye. It does not really give grand views except when the car reaches the top, but if you have time and money to spare it is not a bad thing. I would suggest you walk on and stop only when you reach the Dohány Street Synagogue. 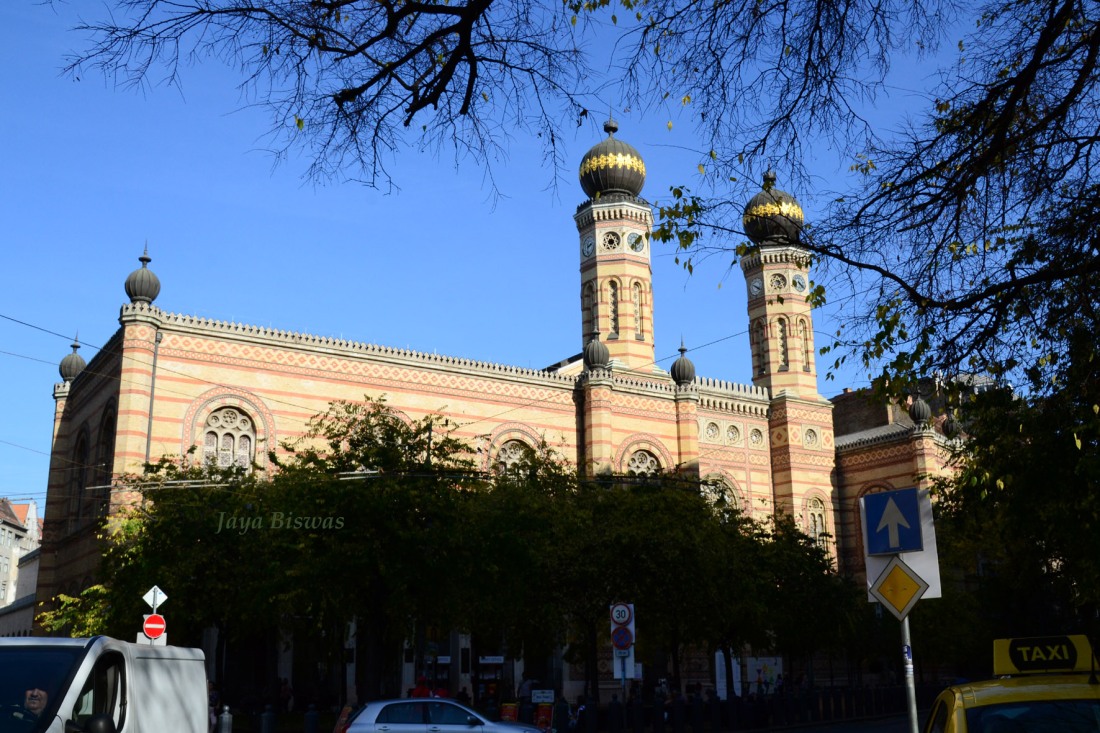 Stop there and reflect. Budapest has its share of the holocaust. The dwindling Jewish population makes its presence felt here with restaurants that promise ethnic food and shops that give you touristy mementos. Unfortunately we missed both the Holocaust Museum and Shoes on the Danube memorial: primarily because we had to spend the rest of the day worrying about bookings in Romania (frantic calls and emails were involved). But I am going to leave that story for another day.

The problem is that not many people speak, or want to speak, English. It will not be a problem as long as you stick to the tourist areas, but local shops have no English. And we did not dare take a tram, even though we really wished to, because we had no idea about the rules or the language. Buda, across the river, is situated on a hill, is more green and full of historical places. If you are looking for a bit of quiet, between the hilly Buda and the plainland Pest, there is a little calm and peaceful Island called Margaret Island, Margitsziget to the locals. 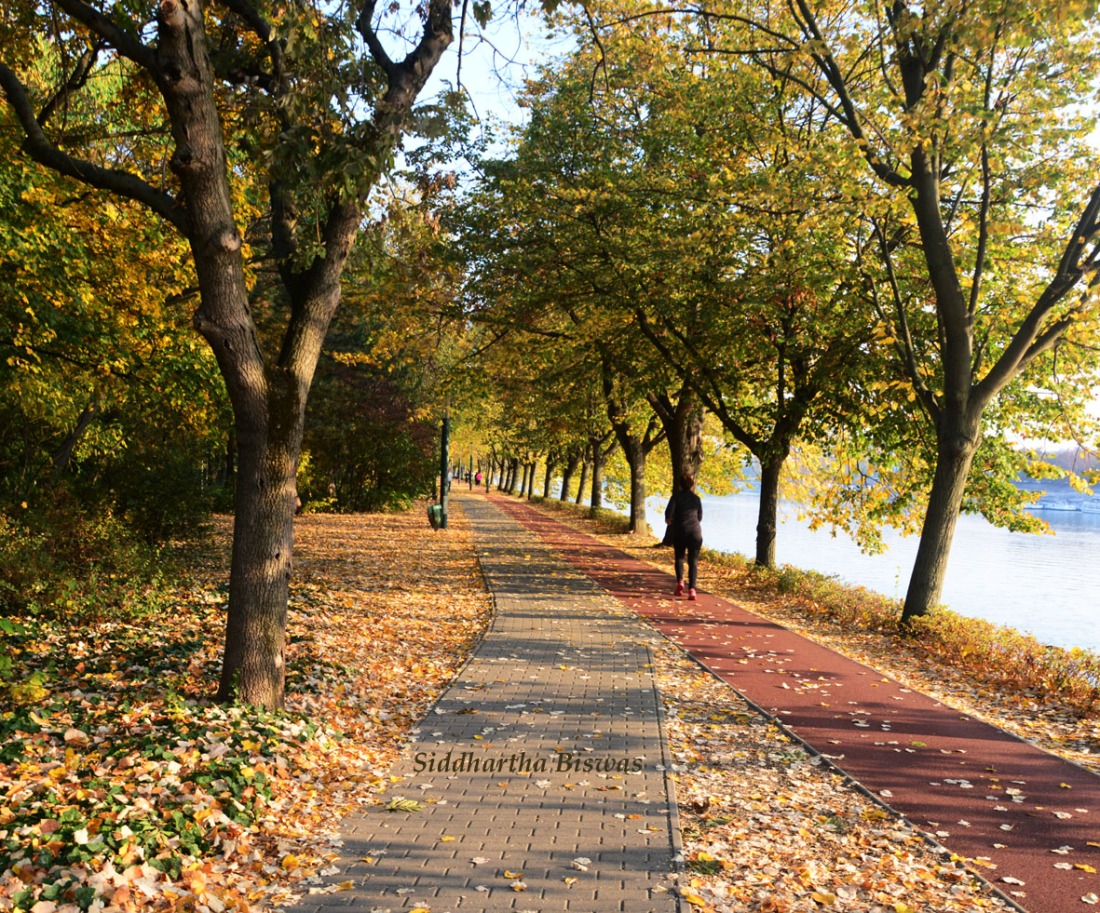 Filled with gardens and various sports facilities, this Island is favourite of health conscious Hungarians. People jog and exercise or take a leisurely stroll around the Island. It is a decent walk. We could not finish it because we were in a hurry, so we have another thing left to do in Budapest.

With a lovely little (and somewhat confusing) airport and quite friendly people Budapest made us feel at home, even if language was a barrier. The universe also so conspired that we had unseasonal sunshine throughout. We were warned that the weather will be wet and cold, but it was the exact opposite. The locals assured us that this weather was quite abnormal, but this was one abnormal we loved. Normal is overrated anyway. I don’t know what life will bring but I would definitely like to go back to this lovely city. 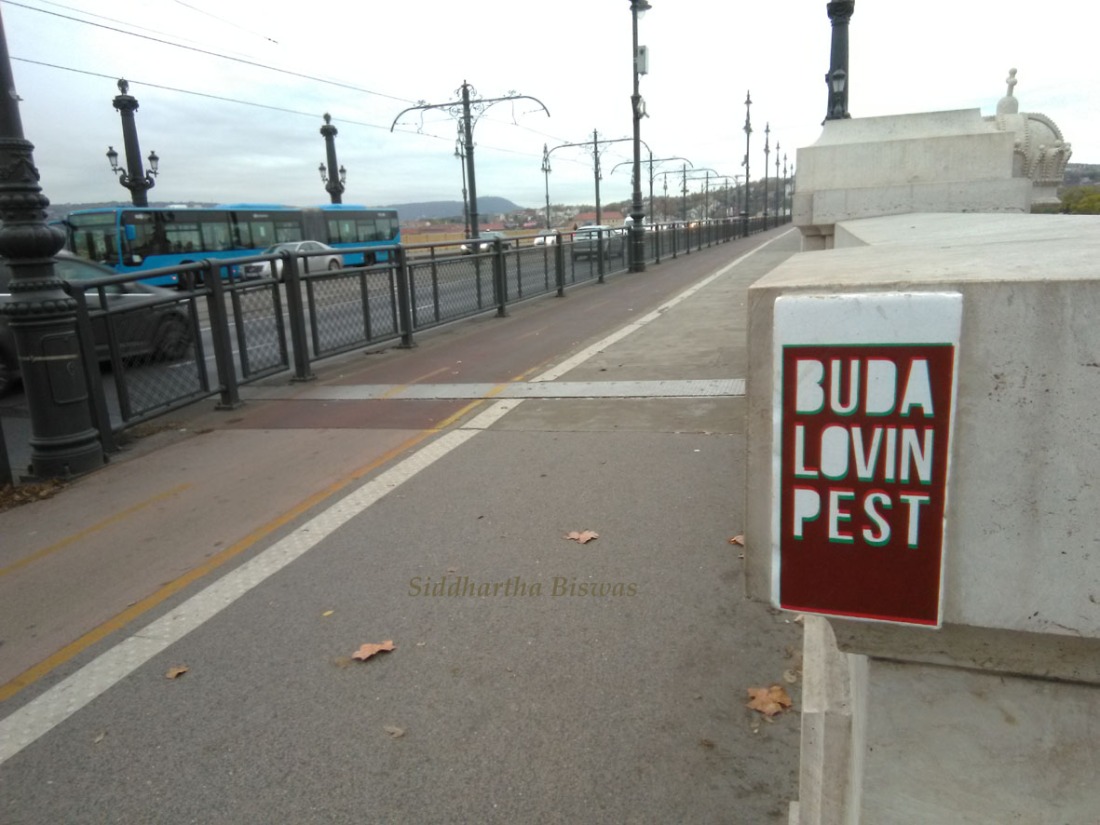