We could not see the moon. The station was mostly dark. A handful of hushed humans huddled together. There were hardly any light outside apart from a few flickers from some distant houses. This was our first night in Transylvania. The first driver refused to take us to the destination. The second one was rather reluctant. But seeing us helpless decided to help. Then he took a road that seemed completely lifeless. He dropped us across the road from the inn, a typical Victorian building in front of a huge Gothic church. 10:40, the clock said.

The woman in the reception was quite formidable. Such is needed, I told myself. After all, this was Transylvania and it was quite late. No one would dare enter without her permission. She looked at us and said we were expected earlier. I had written in advance that we would be late. But there was no room for such interchange. Of course Jaya’s presence had a good effect. Formidable women have some invisible connection. So without much ado she gave us directions to our room. We had the room for only that night and all my supplications resulted in a rather substantial claim of nothing being available ever. We were too tired. And having travelled much I knew a solution will eventually present itself.

The room was small but cosy. In the morning we discovered that the plumbing worked a little too well. Hot water is essential, but just hot water becomes a bit of a bother. But that was the least of my worries. I had to attend the opening session of the conference I had gone to attend at the Universitatea Babeş-Bolyai. So I came down and found a rather gentle looking man at the reception. I explained the whole Cox and Kings fiasco and how Rolandia, the Romanian travel agent, had refused to help us (I had offered to pay cash in exchange of their services and I had asked them to keep the hotel bookings at least, but they gave us just that one night at Melody) and he said exactly what the lady of the night had said. They were full. This was a lovely morning. I was in no mood for long negotiations. So I simply requested the man not to throw us out before my return. And I further asked him to find us something. In my experience people are generally helpful. Cluj-Napoça is one of the four major towns of Romania, so I knew we would get accommodation somewhere or the other. But Melody is a lovely hotel (even though in the absence of elevators I had to carry my intercontinental suitcase up to the second floor) and it is located in the heart of old town.

So I was hoping we could stay here. The fact that they had a brilliant breakfast spread had fuelled my preference not in a small way.

The venue for the inauguration was the glorious Aula Magna in the main campus of the university.

I found my friend Adrian. I believe we are much closer friends now. Over e-mail he was very kind; in person he is a darling. Jaya is in complete agreement. Rareş was charming, efficient and a fantastic host. There was another, but he was busy attaching himself to the American delegates, so I stayed clear of him. Still, this was one of those few trips which make you richer because you manage to make so many friends. I have already told you about the three kids on the train with whom we fell in love.

Unfortunately I had to sacrifice lunch as accommodation was to be arranged. I explained my situation to them. Adrian offered hospitality without hesitating for a second!

Returning to the hotel I found the nice man smoking outside. East Europeans smoke a lot. Seeing me he stubbed his cigarette and came in. He told me he had found one room in another hotel but he is not going to let me take it. I looked at him. He looked at me. With a hint of a smile he said he has already given us a room there. Apparently there was a cancellation. It was a more expensive room. We had no objections. The new room was amongst their best. It looked out to the streets around and gave us a lovely view of the Church.

Soon we found Panemar and had a lovely lunch with sandwiches and coffee and muffins. The second half of the day was a huge sacrifice on Jaya’s part. She accompanied me to conference. Such events are torture if you do not belong to the fold. This time it was in the Facultatea de Litere (Faculty of Letters). The building was medieval. It used to be a school for young nuns hundreds of years back.

Happy faces accompanied us to the venue. We heard the great Laura Mulvey speaking about cinema (and we did a fair bit of selfie-taking).

Can I be just a tad academic? I feel I must add this bit. You can choose to skip the coloured part and jump to the travel bit.

I had my presentation in the next session. I was speaking about memory, construction of identity in the neo-Victorian space that Maitreyi Devi and Mircea Eliade had shared. I went on confidently and finished right on time (taking time from the next speaker is unprofessional and simply disrespectful). There was a lot of appreciation and questions. Only then I found out that Maitreyi is a part of their syllabus. I would have been extremely nervous if I had any idea! Not knowing is often a good thing.

That night we wanted a typically Romanian meal. So we asked the nice chain-smoker at the reception. He wrote it down for us: ROATA. He was very happy that we were looking for authentic Romanian. He gave us directions. We completely misunderstood. However, this misunderstanding took us through a charming little area of the town where there were a number of street restaurants, and musicians played and/or sang; there were throngs of people who were just happy.

But we could not find Roata. So we came back to the Piaţa Uniri or Unification Square. And we chose Toulouse from the restaurants lining the place. It wasn’t typical Romanian. But if it tastes good, you can’t really complain, can you? 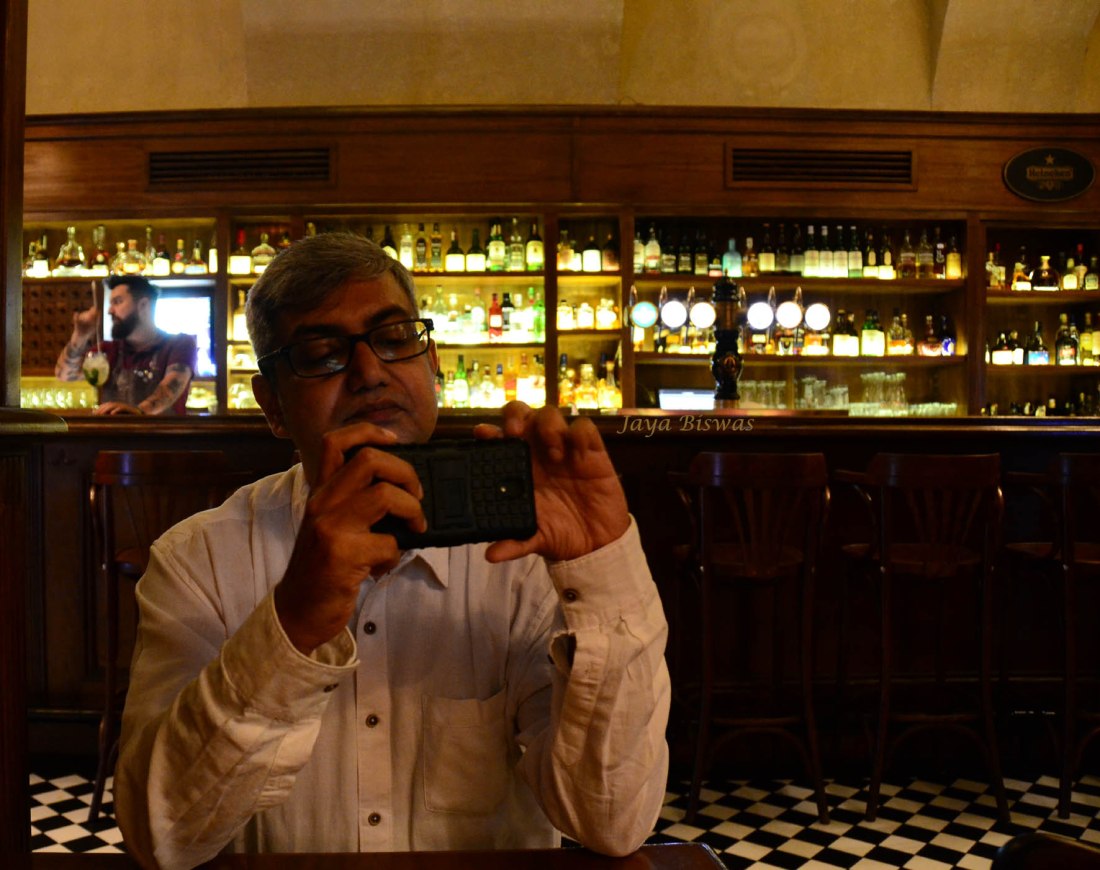 Next morning the nice man was no longer at the reception. There was a very nice girl who helped us to no end. 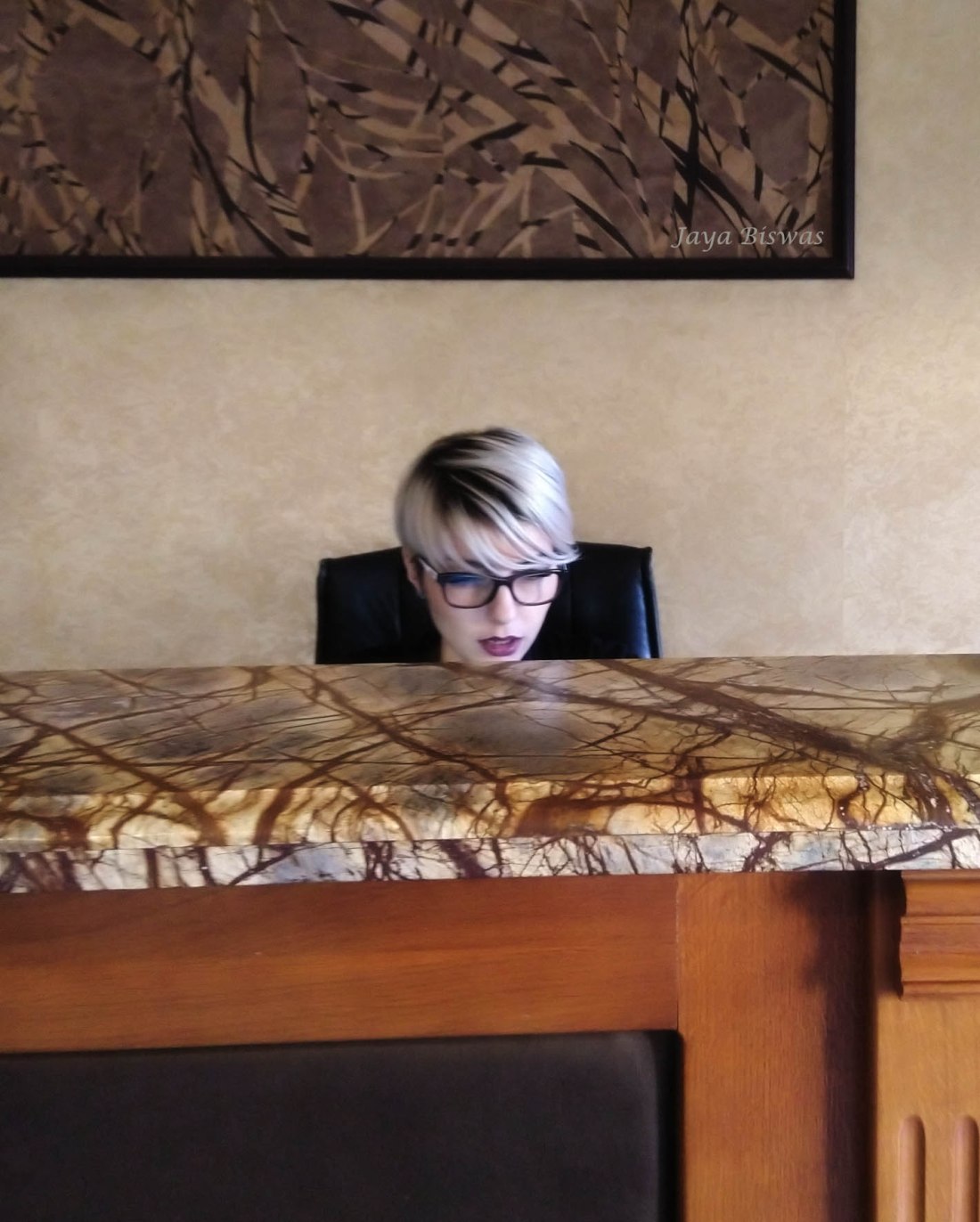 We needed tickets to Braşov. She told us about a travel office. We managed not only to find the place but also someone who speaks English. We also found a Romanian hero who looked uncannily like Shivaji!

Then Jaya wanted to go exploring on her own (she had had enough of academics) and I was going to the Conference. Suddenly a couple of girls approached us and gave us beautiful flowers. They said they had seen us at the Conference and they wanted to give us something. It was such a wonderful gesture. 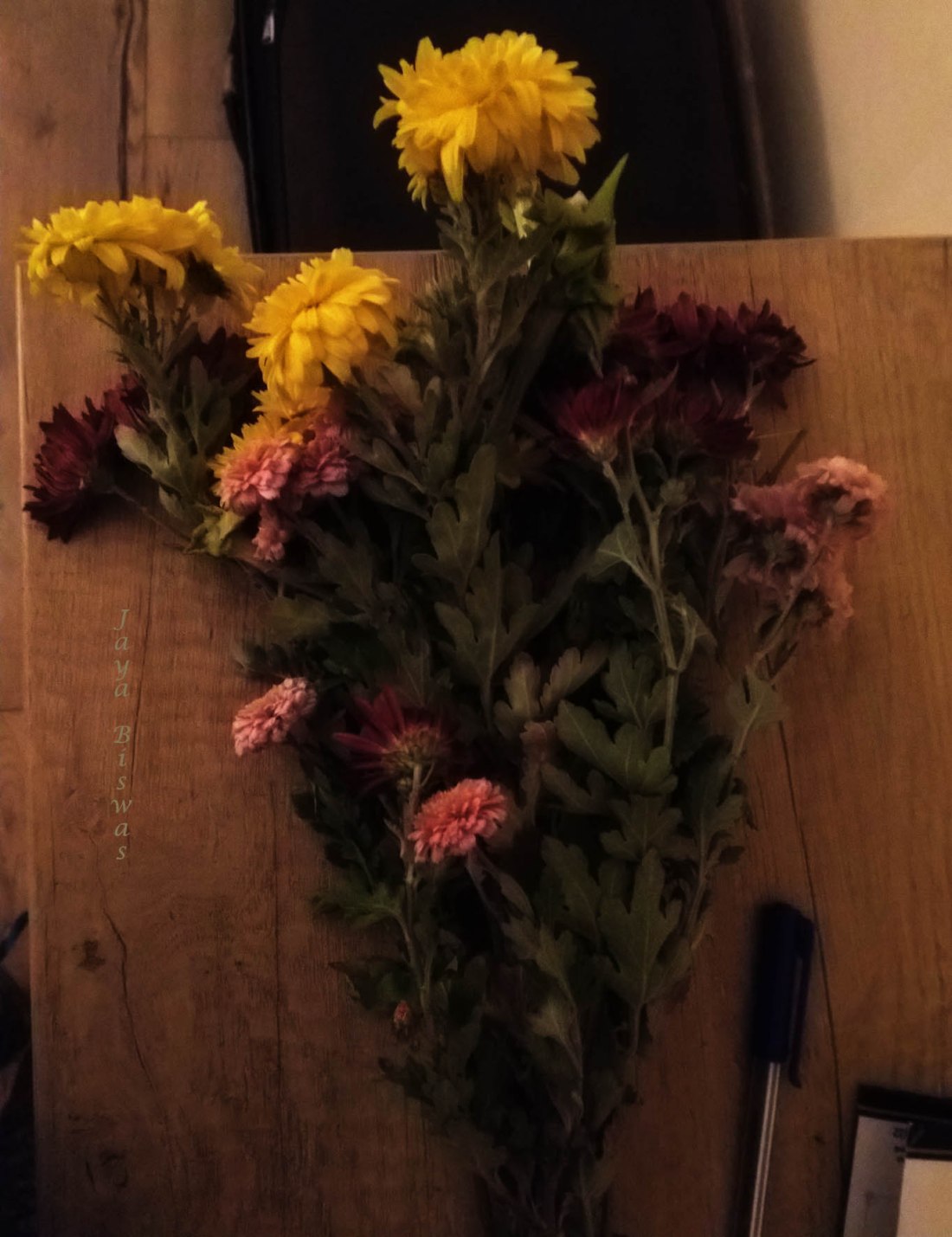 I thoroughly enjoyed the morning session. If Adrian’s paper was fantastic in my session, Octavian More’s paper in the morning was exquisite. After the session I gently took their leave. Told them I want to see their beautiful town. They were completely sympathetic.

This was our last day in Cluj. We spent the afternoon walking around the city. Thanks to a map provided by the university we knew exactly how and where to go. The primary attraction, the Roman Catholic Biserica Santa Mihail or St. Michael’s church was right there in front of our hotel. It was under renovation and had a very interesting cover covering it.

The statue of Matthias Corvinus is next to the church. 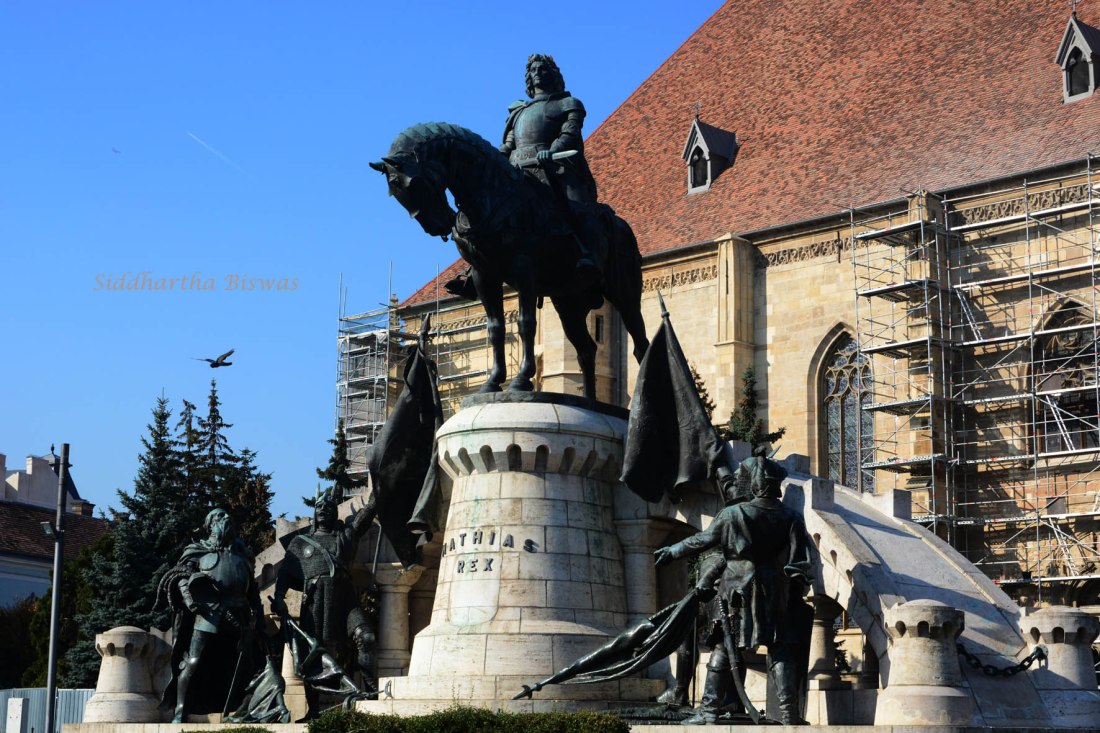 All European towns should be explored on foot to get the feel of the place. On foot you can discover lovely surprises like a beautiful house or a charming garden or a picturesque coffee place and so on. The streets are lovely and if the weather is friendly then life can seem truly beautiful.

We started with the Ethnographic Museum of Transylvania, but decided not to invest much time indoors. There was a brilliant sun and we walked right towards the Old City Walls. Most of the old town sections of old towns in Europe have these old walls. They not only define history but also tell us how the population was divided in categories. Those within were worth saving, those without were no more than useful chattel. Strada Potaissa took us to the wall and a section of the town that was quite quaint. 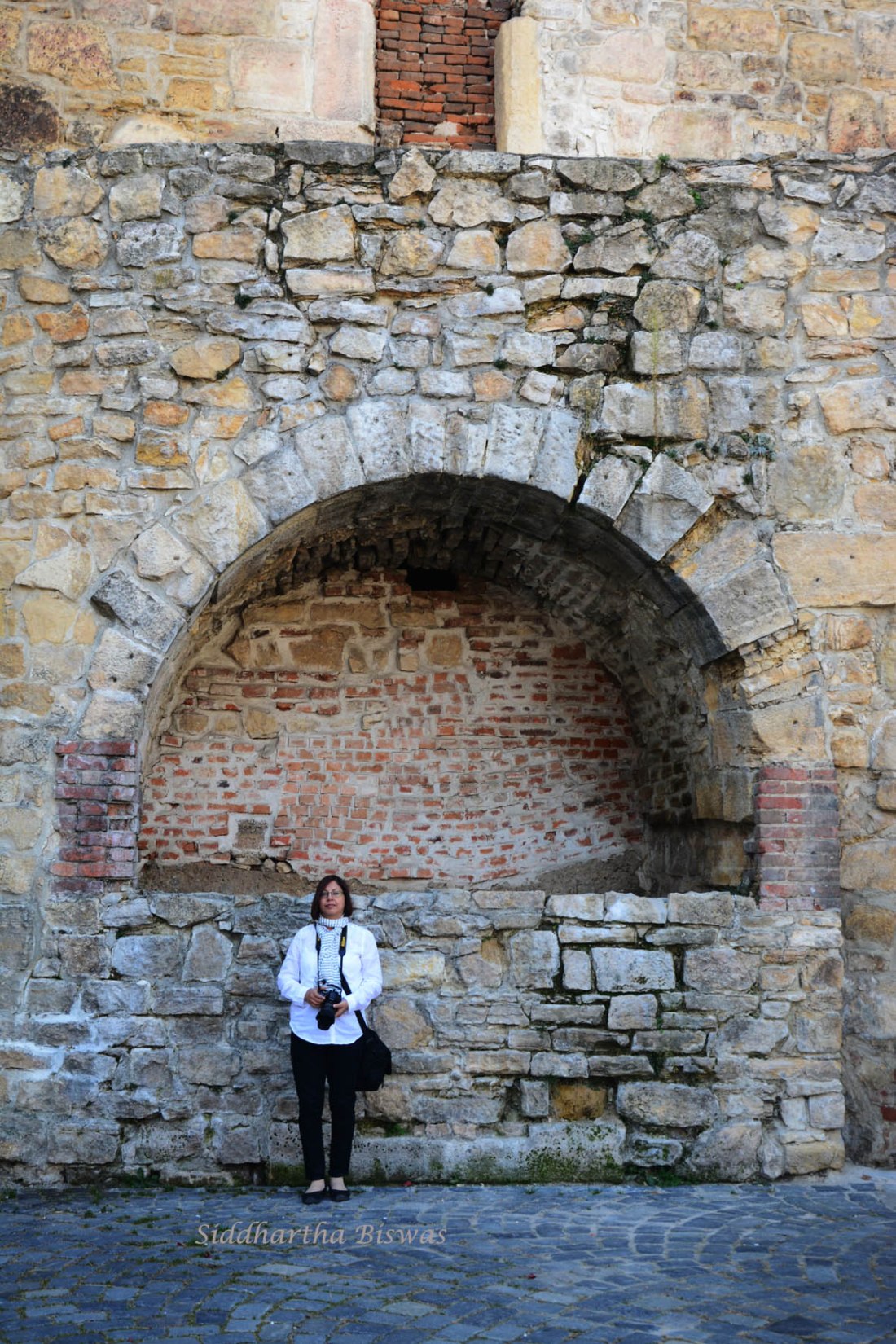 I had to show Jaya the main campus of the Babeş-Bolyai University. 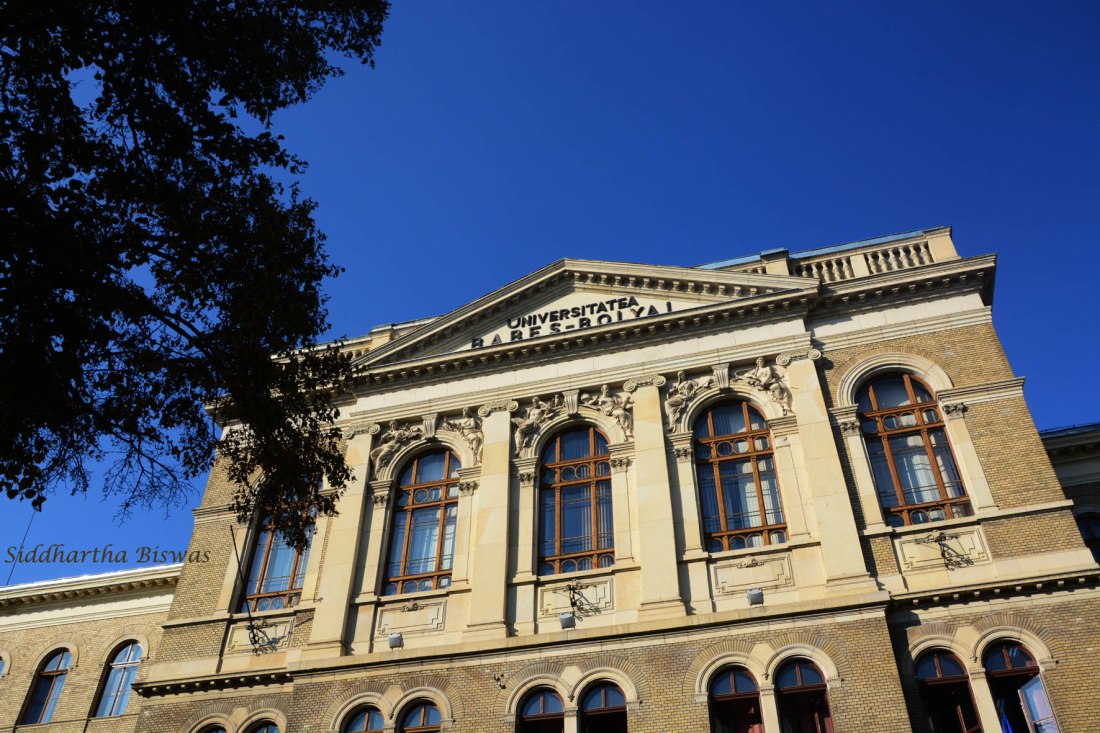 Then we walked to the magnificent Reformed Church of Cluj. This church, Calvinist I think, is austere in architecture. It has a grand Organ and the biggest collection of insignias in Romania. St George’s statue in front was a quite a surprise.

The Bastion had a statue of Baba Novac in front.

Our next stop was the National Theatre of Romania. Theatre is a lifelong passion of mine, so everywhere in the world Jaya has had to go to all these places! 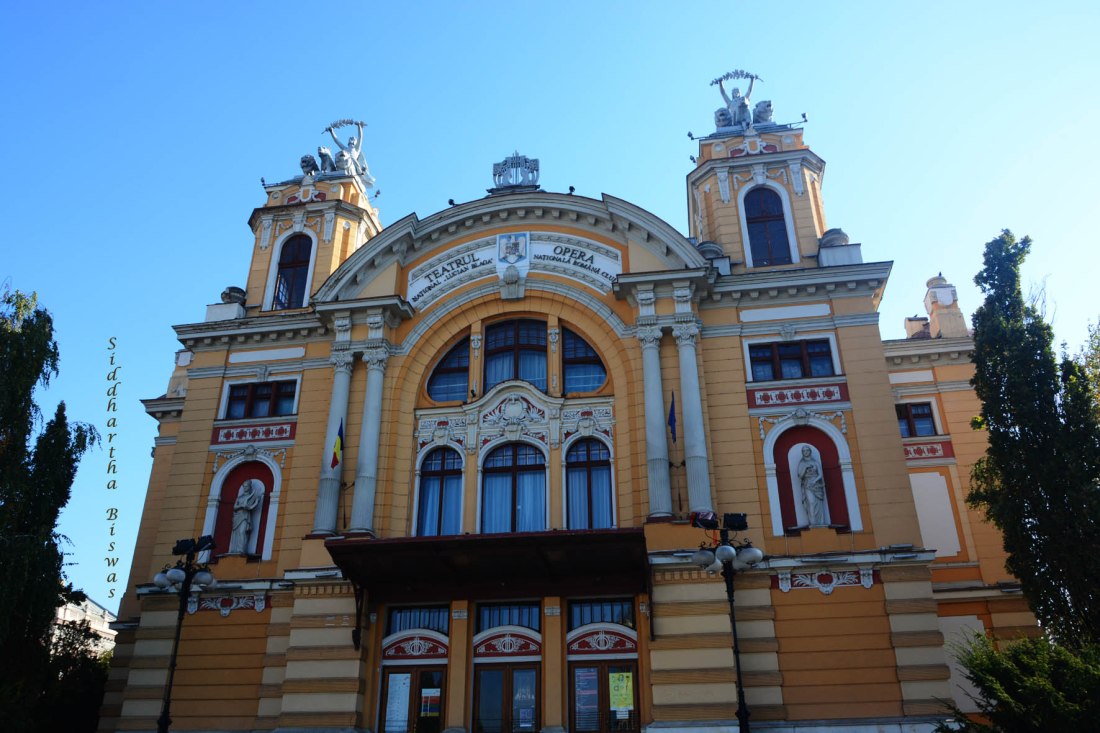 Right next to the National Theatre is the Dormition of the Theotokos Cathedral (known necessarily simply as Assumption Cathedral). It belongs to the Romanian Orthodox sect. 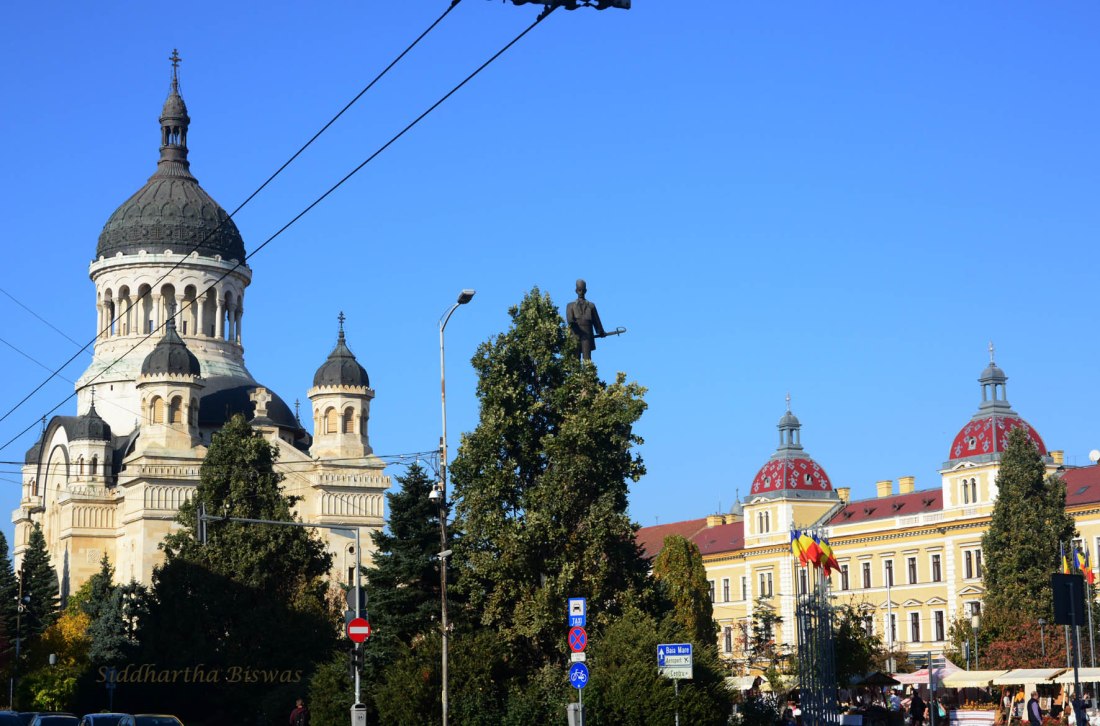 The Cathedral was the last point on the itinerary. We finished with a brilliant Brownie and a rather sweet Honey Cake with coffee. The whole tour took little more than two hours.

And we just sat around looking at life in all its brilliance. 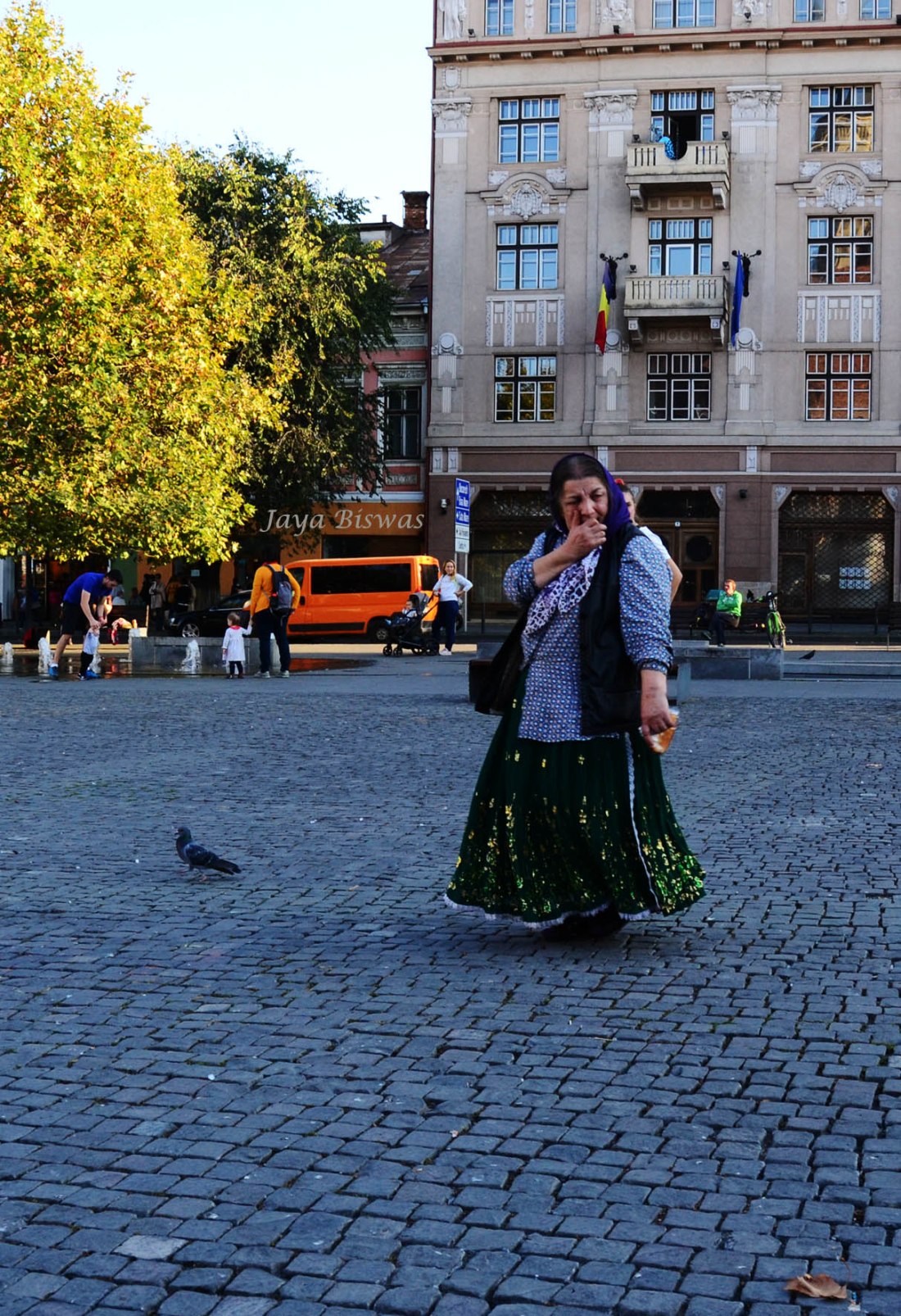 We had a little bit of gelato and then with the help of Google Map went on our quest towards Roata. After a couple of tries we managed to find it. Let me tell you, it isn’t the easiest place to find. Roata was wonderful. It was completely full. But this elegant man came to us. We were probably the first Indians who had gone there. He was very friendly and gave us a table in an inner room. And then gave us free promotional wine and free house-made Palinka. The friendly advice was to have the wine first. Palinka is 55% alcohol. We obeyed. Along with a great Sarmale and a Snitzel we had a lovely time there.

Walking back to Melody Central we were actually feeling sad that our time in Cluj-Napoça was ending. In that very brief little time we had managed to have this affection for the lovely streets, the lovely helpful people who always welcomed us with a smile and the lovely shops in which we could not tell the difference from carbonated water and regular water (try drinking soda when you are thirsty!). This was Transylvania: a land of happy people. The myths I will deal with in a future post.