I have lived here practically all my life. Since the age of four and a half I have been a resident of the Far North. Meaning the northern fringe of the city I have grown to love. I have travelled to Europe, to the Asian Far East, and to many corners of my country; and even though I have always known that my immediate surroundings are equally historically significant, I could never actualize my plans to explore. Occasionally we walked around, marvelling at lovely old buildings, curious architectures and obvious relics of a grand past, but never really looking with the intent of finding or learning history. 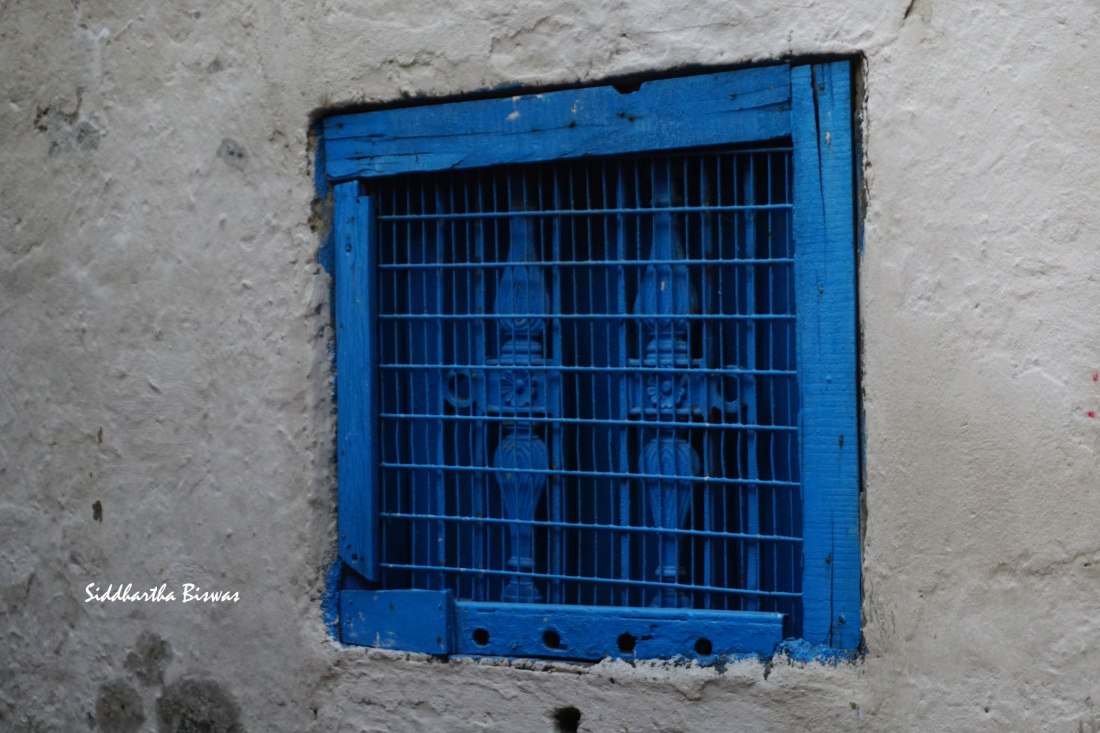 The casual view lamenting a lack of preservation has little value. What we need is the awareness that we are losing a battle with greed and sheer indifference mingled with callousness. It is true that each and every item of the past cannot be preserved, the present and the future must have due priority. But there are some monuments and memories that need conservation – purely for the sake of the present and the future. Erasing the past is eminently easy. Living with it, learning from it, and keeping it alive so that it cannot fall victim to denial by political strategy is the responsibility of every concerned and enlightened citizen. 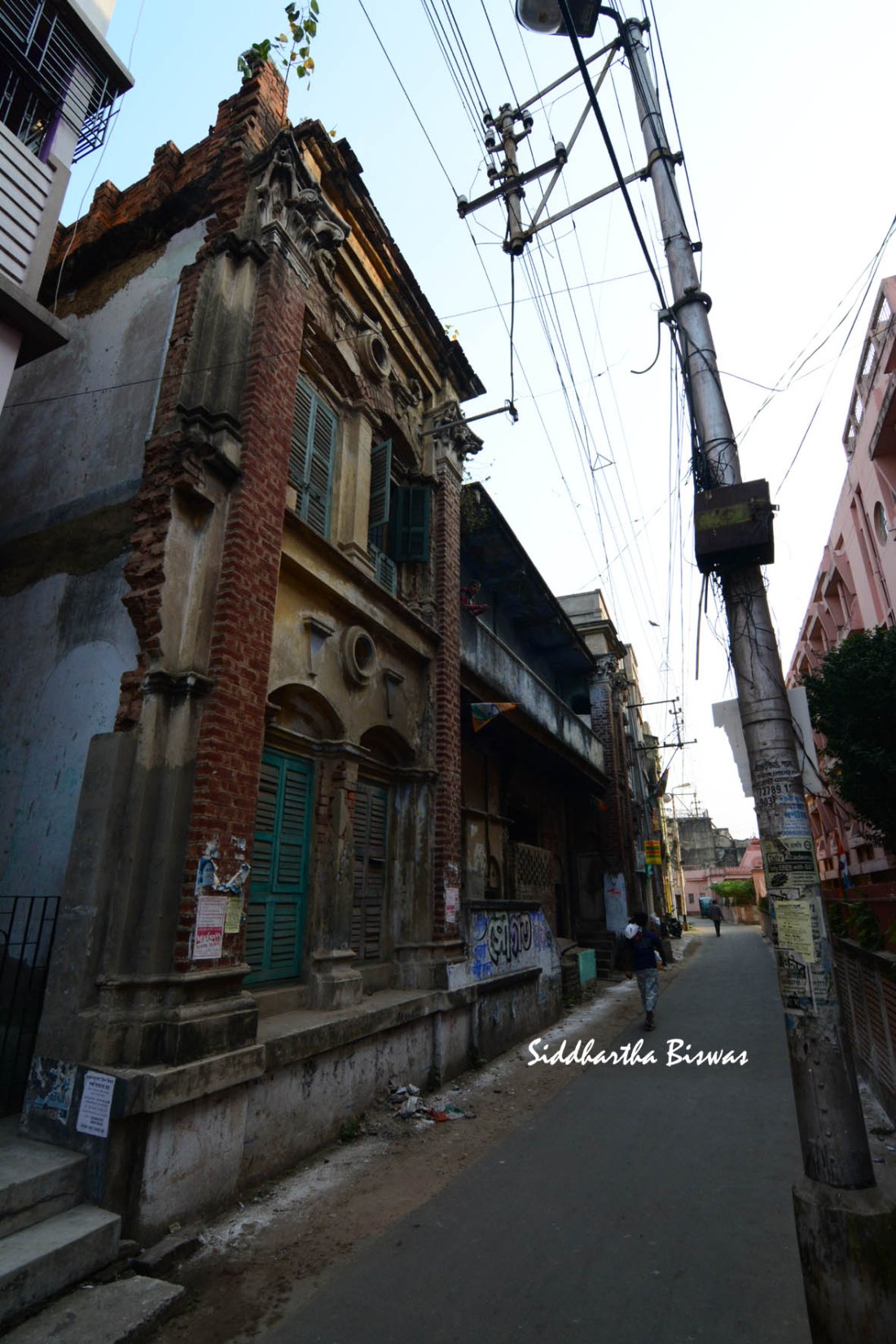 When Mukut’s call came I did not at once accept the invitation. As is the practice now, my response was guarded. But Mukut and Soumyashree are kids I have come to trust and since it was only a Sunday afternoon that was at stake, my hesitations disappeared. 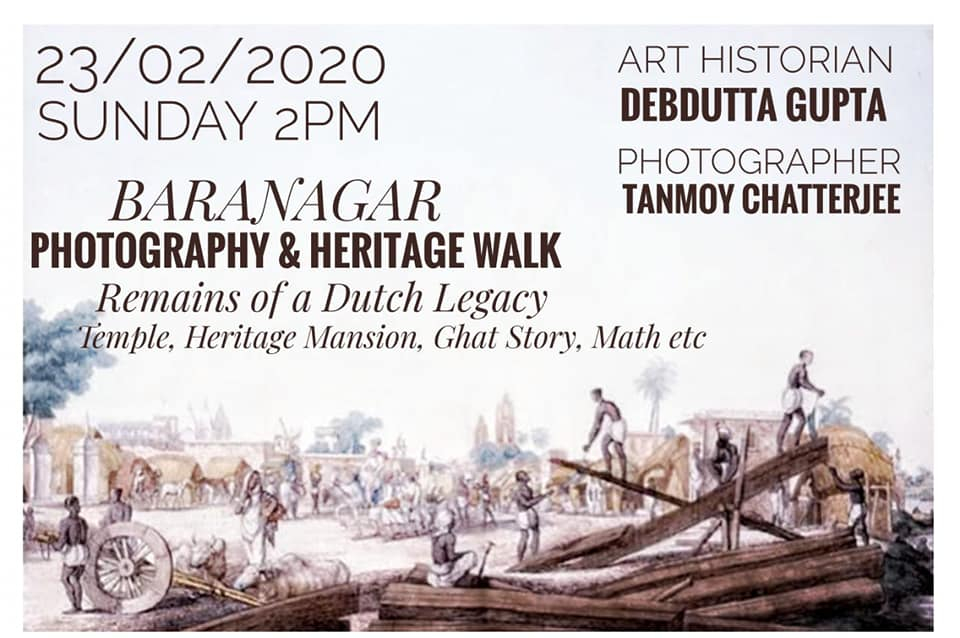 Their proposal included a route I myself have often wanted to follow (courtesy Google Map) and the opportunity of photographing these places was something I could not refuse.

We live in a time when people are no longer quite welcoming. I have had weird experiences while shooting in the streets. Unless it is festival time, there are always questions and suspicious looks, even hostility. No one believes you when you tell them you are an amateur photographer shooting for your own personal interest. So photowalks are safe because numbers help and they give you a kind of touristy license. Added to this was Mukut’s promise that he will tell us about the history (not only the myths) of these places. And the promise was duly kept.

So on this partially cloudy Sunday afternoon a band of people, mostly unknown to each other, gathered at the unglamorous Sinthi More and with minimal delay started on a journey that would last a few hours, but will leave an impression for a long time.

The first point was the Dutch Governor’s house on B.K. Moitra Road, near Kuti Ghat (Kuti is the corrupted version of the word ‘Kothi’). What remains of that building is but a skeleton. No one would imagine that this was a seat of power a couple of centuries back. The Dutch had wielded great influence from early 17th century till early 19th. And this was one of the favoured places. There used to be a sign signifying its significance. But that sign died of neglect along with the façade of the house. Now the building is waiting for some Promoter (the dreaded term signifying the personages responsible for the onslaught of apartment houses) to untangle legal difficulties and remove encroachers.

This area is home to many old Kothis. These were essentially buildings inhabited by the businessmen and used for multiple purposes.

Some hosted leisurely activities (the remnants of a nahabatkhana, or the elevated structure that housed hidden musicians, was our next point), some were used as warehouses.

All had significant histories not only related to commerce, but the politics of the day as well. There were rajbaris (royal palaces) in which rich traders with the title Raja given by the rulers would reside and they would host remarkable people and equally remarkable gatherings.

The ruins speak of an opulent glory that is incredibly hard to imagine these days.

Then we went to the Joy Mittir Kalibari. Like most temples this space has seen constant care and has remained as glamorous as ever. Of course this temple, dedicated to the goddess Kali, is quite ancient. Popular lore says that while travelling by boat Rani Rashmoni saw this temple and decided to create the temple at Dakshineshwar in its image. Too much care or significance can be a bane as well as a boon. The Joy Mittir Kalibari complex is now constructing a guesthouse which is good for the guests, and for business perhaps, but ruins the spaciousness that is believed to create a spiritual atmosphere. 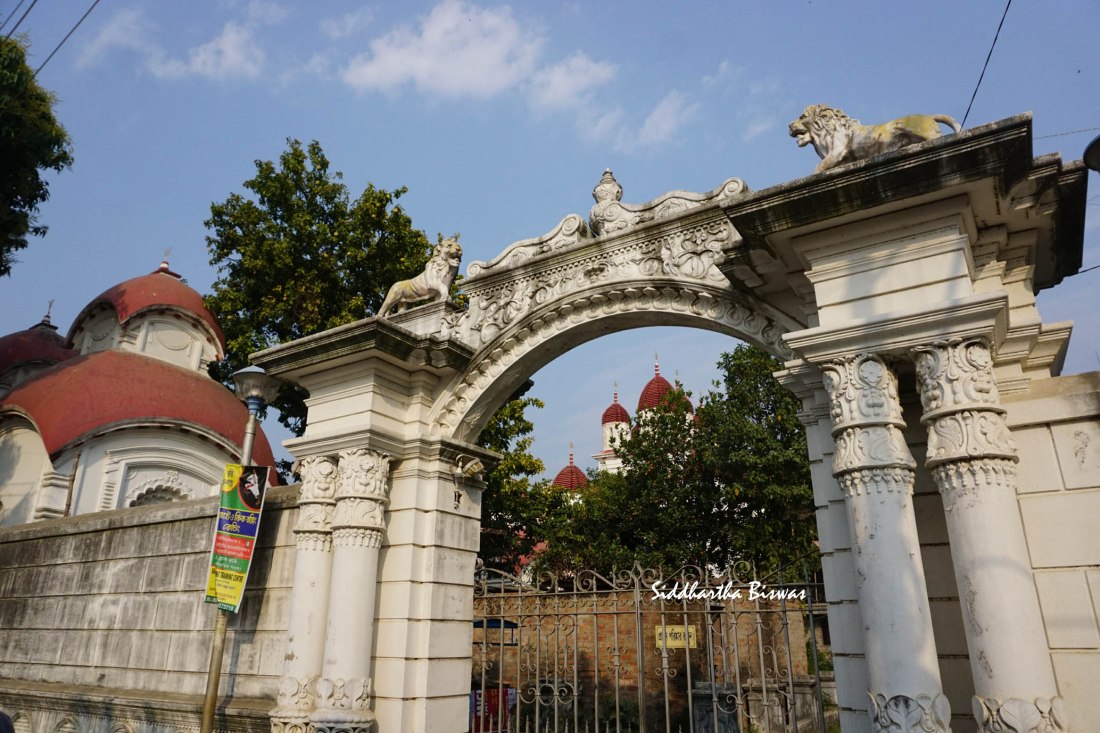 Of course, the twin temples that we visited next – located in a nook amongst high-rises young and old – had barely the space to get a good shot. As with many minor shrines around major ones, the details or history of these temples is now as obscure as the legal status of many a building surrounding it.

The temple next to the road, barely noticed by the busy pedestrians, also has a rich history. This 160 year old twin temple stood here when there were nothing but fields and jungles in the surrounding areas. This was an old historical space, now submerged in the cacophony of callousness that our culture excels in. 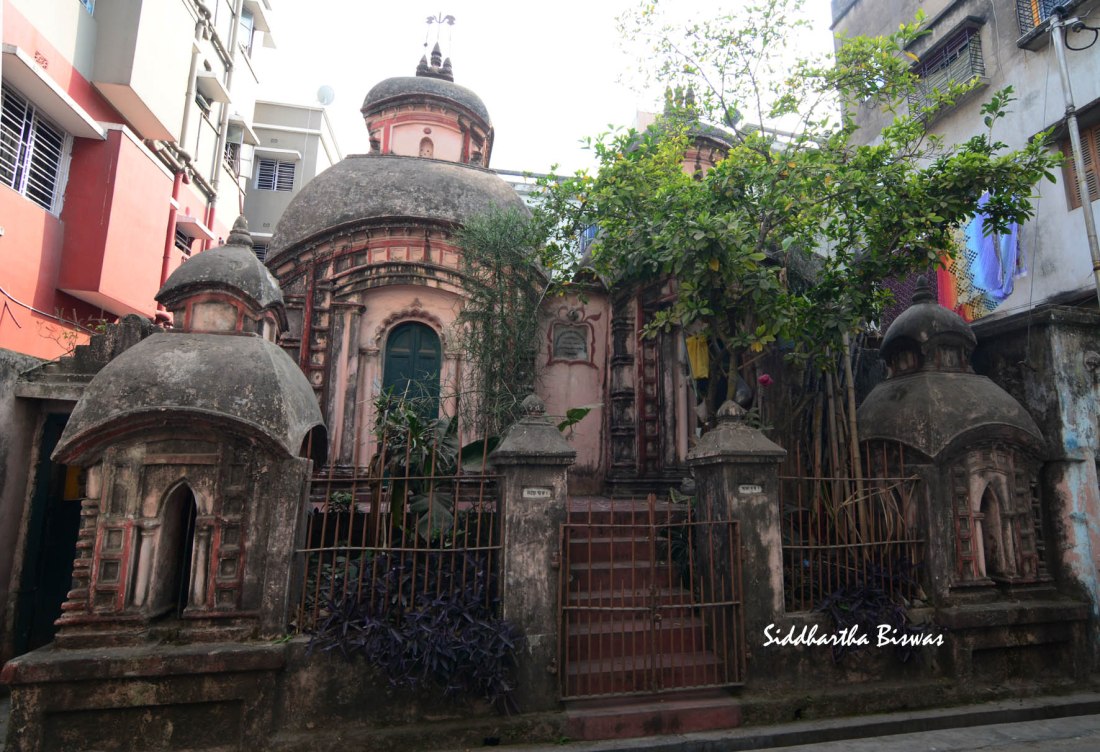 Kāthadhari Math (kātha means a kind of cloth blanket, Math is a kind of monastery) was next on our list. Apparently Chaitanya Mahaprabhu’s kātha was kept here. For those who have absolute faith, such relics provide great value.

Then we saw two small but lovely Radha-Krishna temples. Mukut mentioned, despite a large Alsatian’s objections from a balcony, that Baranagar’s religious import is not limited to the Kali singularity, which is one branch of the Hindu religious configuration, but it also had the presence of a large number of Krishna worshippers too.

We had a lovely snack sitting on the steps of Pramanik Ghat, made even more pleasant by the slanting light of the westward sun and the newfound friendship within this motley mix of people.

However, the memory of the infamous Baranagar-Cossipore massacre, in which many Naxal activists were killed by the state, made us stop and remember. The bullet marks on the walls of the Ghat still bear witness to a time of authoritarian rule. Always remember. Such days come back without fanfare and all of a sudden ordinary people find themselves targets of state-sponsored violence.

There are a number of interesting ghats with interesting objects. Among them is the ghat for women. 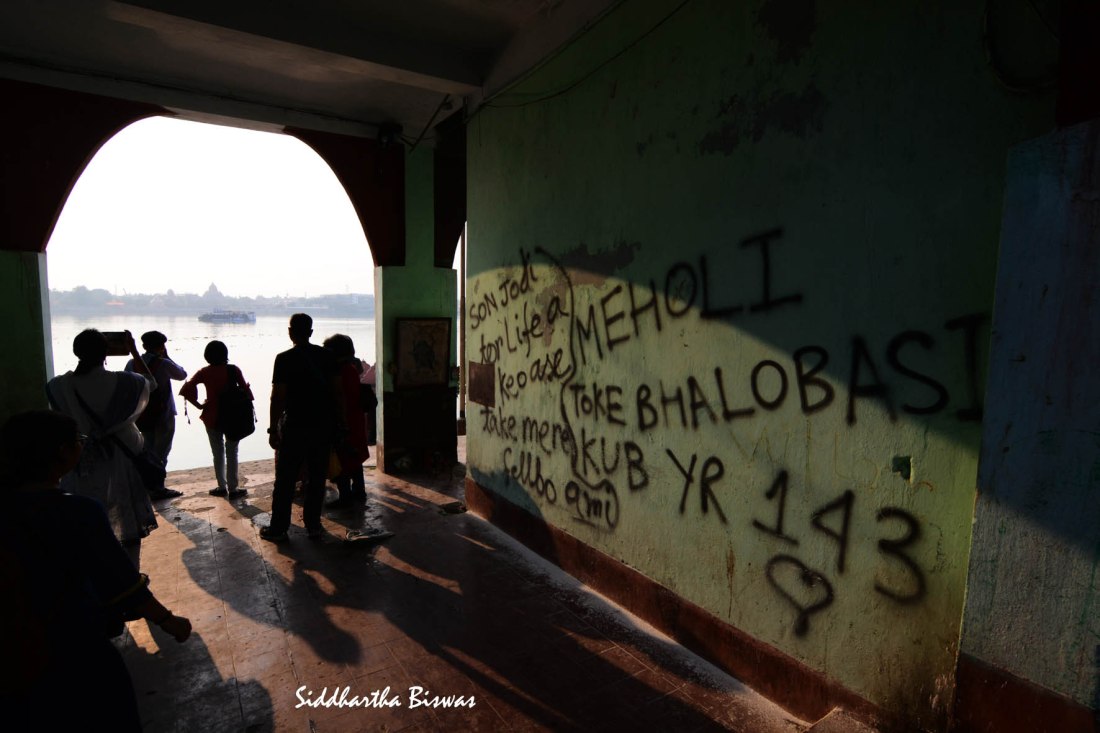 And of course one must mention Satidaha Ghat. Sati was probably the worst social evil in our part of the world. And Raja Rammohan Roy had to face almost the entire society in his fight to end the custom. Lore says the great man saw one such event happening here from his boat and stopped it. This was one of the many fights that led to the Renaissance in Bengal.

The two historical temples that were a part of the journey came next. We saw the Kouleshwar Shiva Kali temple first.

Then we went toward Pramanik Kalibari. 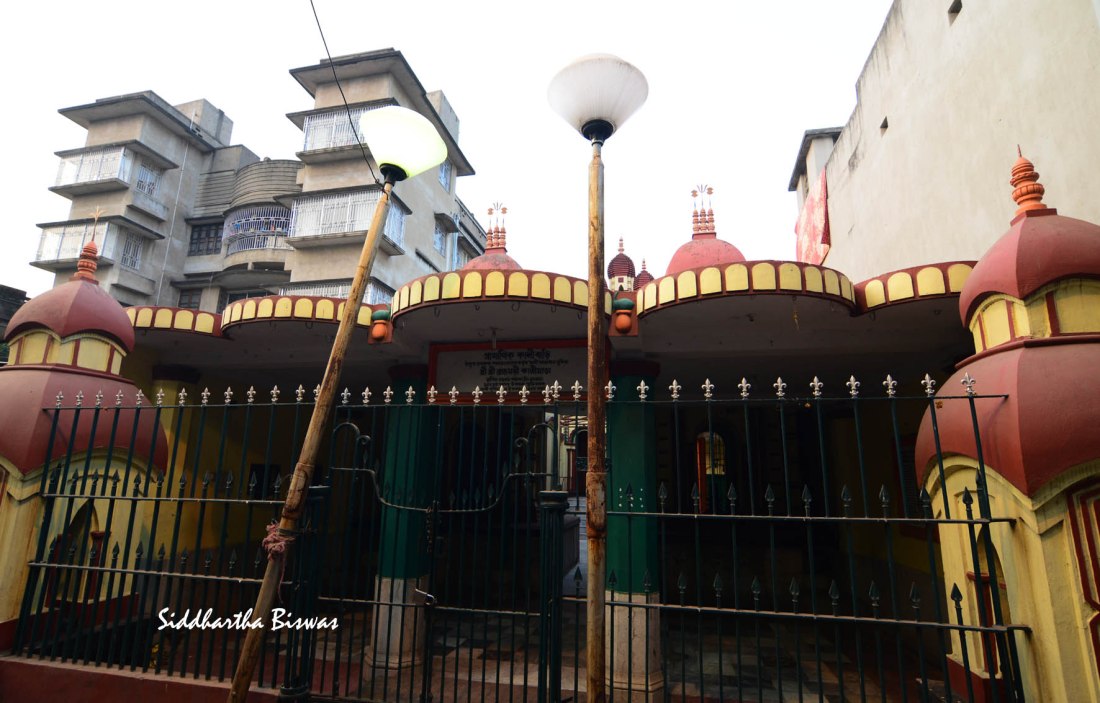 Our journey then progressed towards the Cossipore area. Ratanbabu Road may not be the official boundary between Baranagar and Cossipore, but by extension they can be imagined to be a part of Baranagar. Officially the municipal area ends in the South with B.K. Moitra Road and most of our travelling points were within the Cossipore Municipal area.

Ratan Babu Road leads to one of the major burning ghats under the city area. And for that reason I have travelled through this road more often than one would want to. Each time the two large gates and the buildings they contained had grasped my attention; as did the temple in a small grassless field. This was the area where Rash celebrations are held every year.

But the gate with intricate designs that had intrigued me for a long time turned out to be truly fascinating. The two temples inside seemed innocuous, as did the now-modernised mansion that one could see. But this was the place which had once sheltered a number of soldiers belonging to the Indian National Army. That chapter may have its own tragic trajectory; but the thought of all the brave souls, fighting for a man who had a very different vision for the future, occupying that space even for moment in time, gave us goosebumps.

We moved to the other gate a few metres away. This was the gate to the Narail Rajbari. 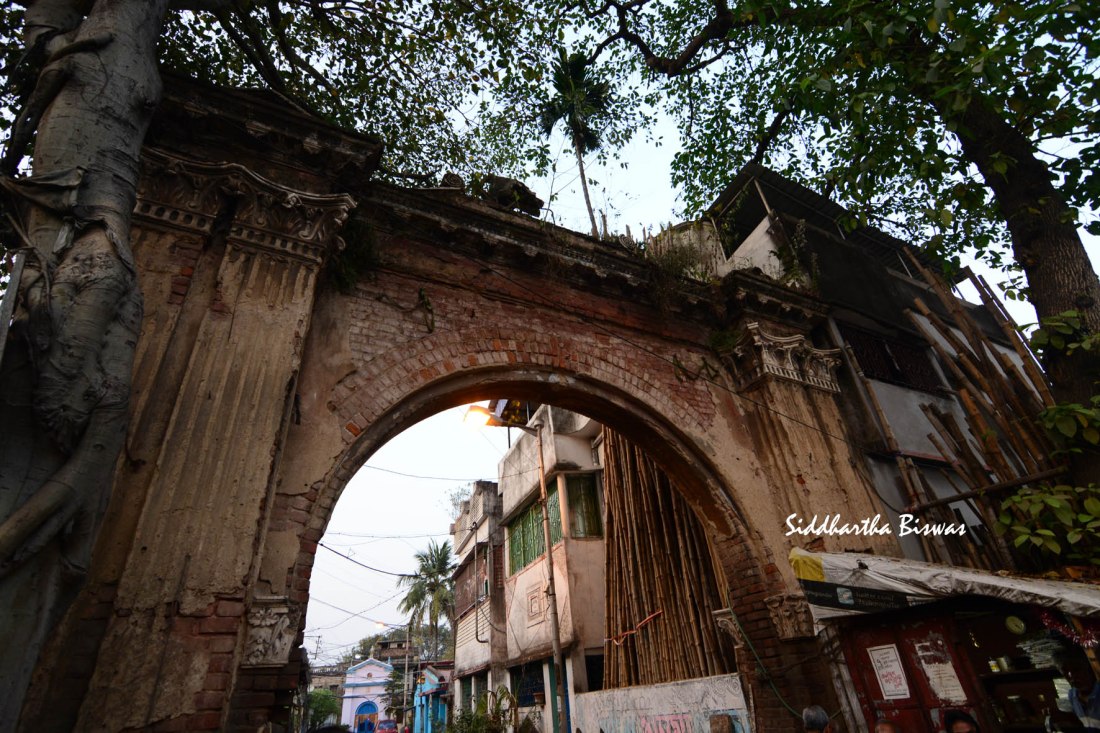 The gate has recently lost the lion that gave it the name of Singha Darja (Lion Gate).

Narail is part of Bangladesh now. But once upon a time we had no borders with that part of the world. The Palace now is almost completely dilapidated.

A few portions are kept habitable by some occupants – who claim to be the descendants of the owners. Some of these quarters give the solemn atmosphere sudden flashes of colour. Sometimes they add unintended comic touches as well.

According to Chitrakatha, Zamindar Pulin Bihari Roy established this house when he had to frequently come to Kolkata for business.

Appreciating certain other remarkable buildings on the way, we came to our final stop.

This was the Dacoit Kalibari on Cossipore Road. Established by Bamandas Mukhopadhyay in 1904, this Kali temple apparently was frequented by dacoits at some time. This temple has a remarkable iron framing that still is used to hang artificial lights during performances on the courtyard. 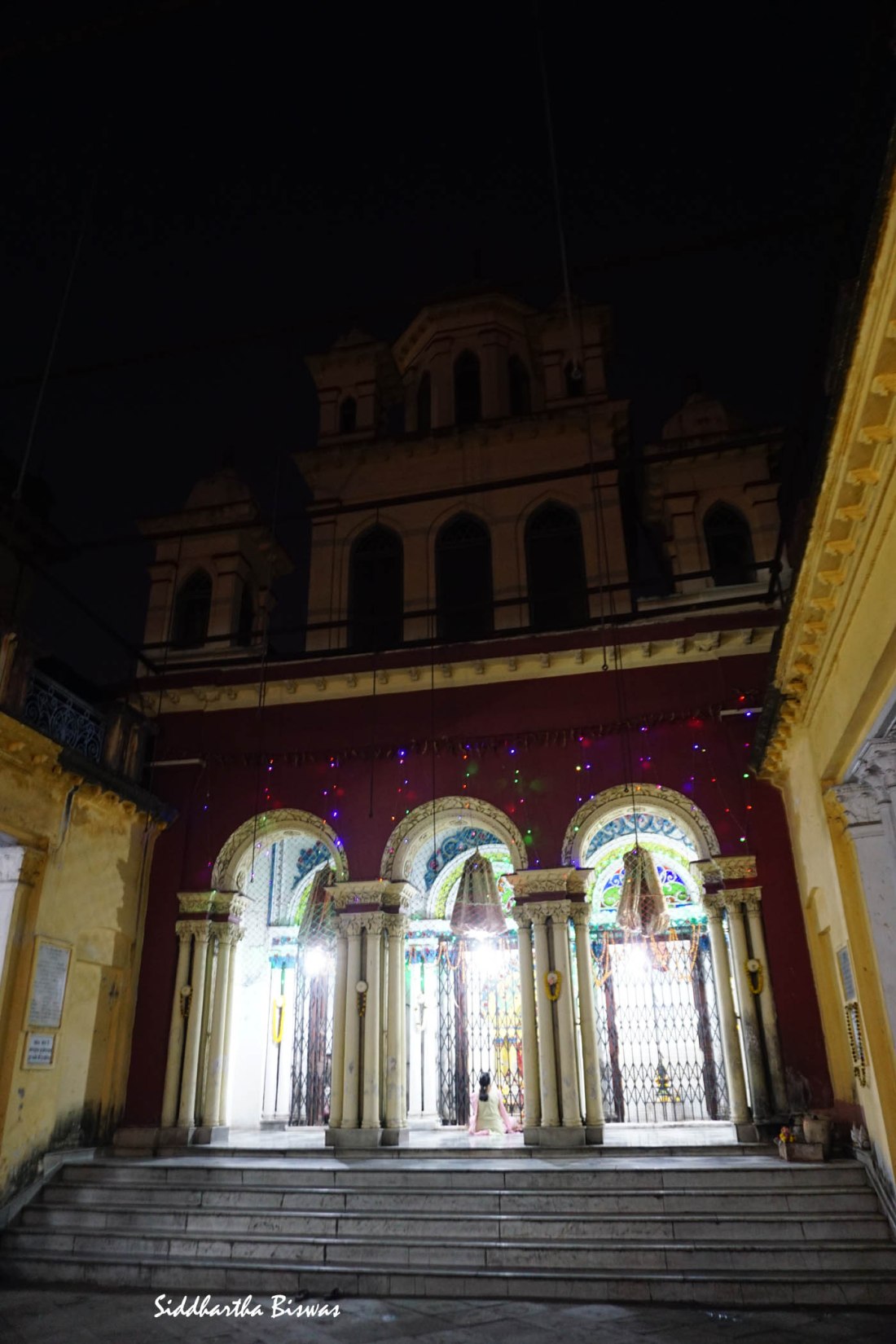 Sitting in the courtyard of the temple there was a strange feeling amongst all of us. No one really wanted to say goodbye. It was around 7:30 in the evening, we were all quite tired. But somehow the handshakes, the groufies, the exchanges of pleasantries and contacts, did not quite stop.

Finally, the arati started. Since we were not feeling ultra religious, and other people were trickling in, we decided to call it a day. And what a day it was. Thanks to Mukut and Soumyasree, and Chitrakatha, we ended the day a little richer with new insights and new friends.

5 thoughts on “Presenting the Past”