The gnawing sound continued. Otherwise the silence was absolute. The dim glow of the solar-powered lamp hardly provided illumination. I had not noticed just how low this light was – I was under the impression that after that terrifying day I would sleep like the proverbial baby. But that was not to be. The constant gnawing, just above my head, accompanied by a strange occasional hum, made me drift in an out of a fatiguing stupor. Then something fell on my face! I almost jumped up. The others were deep in the world of oblivion. There were no windows so I had no idea about the whenness of the night. Then I remembered I had not taken off my watch. It was 2 o’clock. And I was reminded of another petrifying night.

I am not using the word petrifying figuratively. It was more than two decades back. I was a young man still suffering from Syllabitis. I used to travel a lot with a number of people. I have written about this particular trip earlier. I think I have written about this night as well. This was in a forest bungalow in Kerh, a miniscule settlement not far from Daltonganj. The bungalow was almost on the highway and we could hear traffic quite clearly. After spending 10 days in the densest forests the sound of civilization wasn’t unwelcome. But the moment I had stepped in, a strange uneasiness had grabbed me. It was a brilliant moonlit night, the absence of electricity hardly mattered. But there was something about the bungalow that felt so very wrong. Three of us were supposed to sleep in one room, three boys in their early twenties (we thought of ourselves as experienced men). There was absolutely no reason why I should have felt what I felt, but it terrified me so much that I did not sleep a wink. Going to the toilet was probably the most courageous thing that I have ever done (you must remember I have experienced total anaesthesia and complicated surgery, faced dangerous interviews and suburban train journeys) and the entire night I spent lying still and sweating under a blanket in that sweltering June night. To this day I do not know why. The other two also said they had similar feelings, but pretending to be strong alphas no one had mentioned anything. The fact that they slept like dead men still makes me doubt the sincerity of their claim. They probably felt left out. This was too good a story.

Of course I had rarely slept in my English winter days. I was given a three-storey unit in a block of flats in Suffolk Road (I distinctly remember it as Suffolk Walk). It was much larger than the four-square-feet I live in now. The ground floor was very large, the 1st floor had the big bedroom and the toilet and a creepy closet.

The 2nd floor had a smaller bedroom. During daytime it was brilliant. There was a dazzling view of the woodlands at the back of the campus; in fact a large water-body and a river separated the campus from the woods. 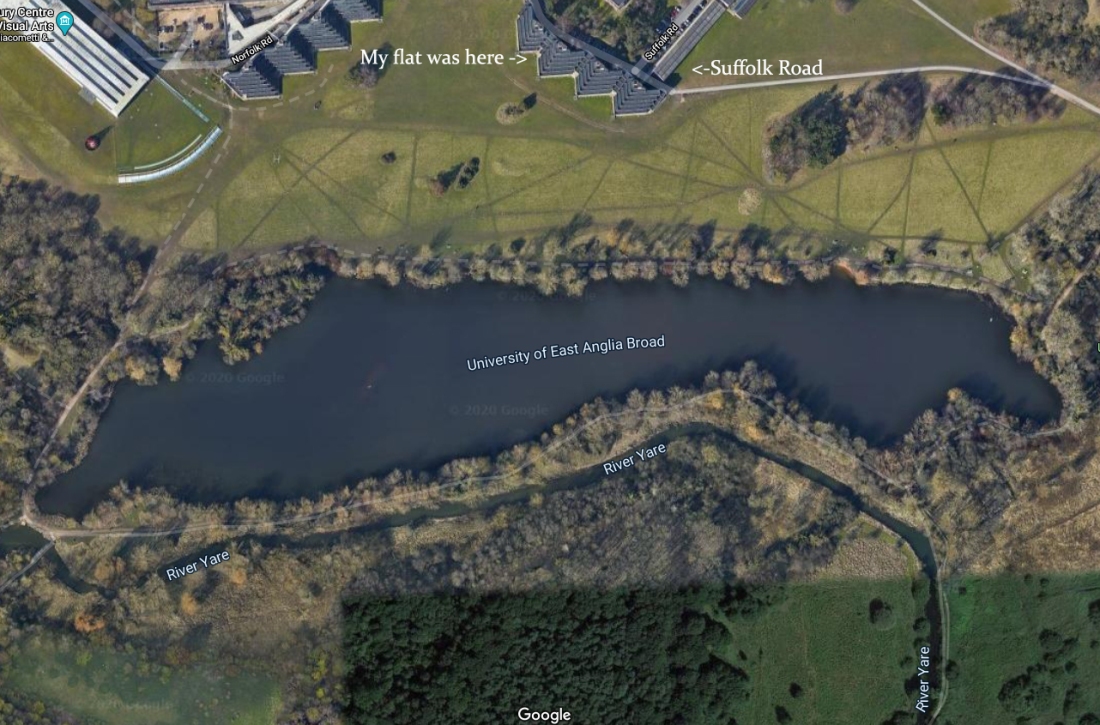 There were no walls or fences.

But nights were quite something. The winter wind gleefully played through the trees and the whistling seemed to come from another world. Winter in East England is not forgiving. The sun came up around 8 in the morning; by 5 pm it was pitch dark. From Friday to Sunday the entire campus was emptied. There were no neighbours. I was practically the only living soul left in the whole campus.

But I was not afraid of the spiritual. All the buildings in campus were joined by a skywalk and just next to the 2nd floor bedroom was the emergency exit opening to the corridor. There was a loose stone right next to my exit. And every time someone would walk through I would hear a thud! On weeknights a lot of people I could hear going to and fro. The library and the laboratories were open 24 hours, so it wasn’t unusual. But Suffolk Road was at one end of the campus with a large field separating it from the main buildings, so no one needed to come to this portion. The main door was partially glass and there was one teensy latch holding it together. I was terrified of human intervention. I had gathered enough personal experiences of racism to understand that violence needs no reason. So all those winter nights I slept with an eye open – not a simple feat I tell you. 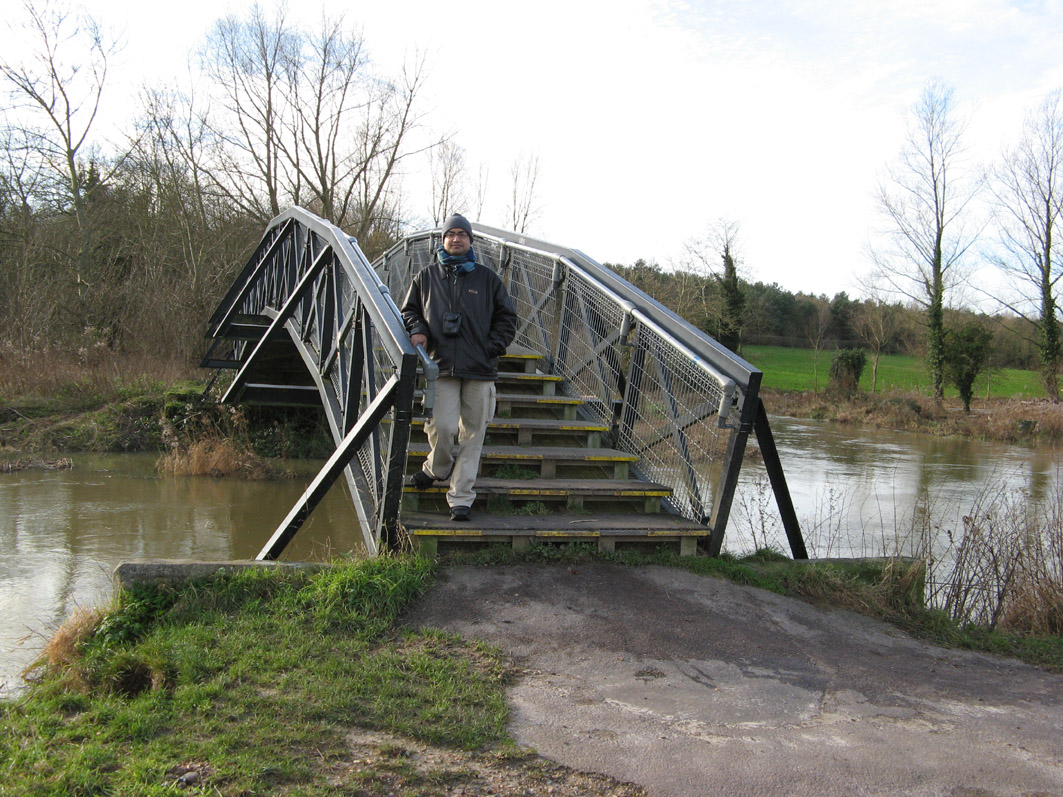 But this night was different. I was with Taju and Jaya, the two people I trust my life with. We had travelled 16 kilometres. And each inch of the road was relentlessly steep and narrow. And we were on muleback. And we had to go down the same implacable path tomorrow.

Downhill is always more daunting. Every single muscle in my body was aching. In fact, I have never experienced so much fear in any such journey. I felt frozen at least three times. I saw something or the other that gave me courage, but that is a different matter.

I needed a very good rest. But that was not to be. I sat down. But I couldn’t get out of bed. The entire floor of the room was the platform that doubled as the bed.

This was probably the most expensive room in which I have stayed. They wanted Rs. 2000, but Taju’s powers of persuasion brought it down to Rs. 1500 and the promise it will be ours, no other human being would share the platform.

They also gave us complimentary daal roti along with the room. There were no amenities, only the semblance of illumination given by the sun-fuelled lamp. Toilets are a luxury that you do not demand in such places. This entire settlement had just one. The priests may have had their own arrangement – but you certainly couldn’t ask them to share!

I sat down, cleared my head and investigated the blankets. The findings were unique. The stuff that fell on my head was a handful of wheat! Suddenly everything made sense. Wheat was stored in gunny sacks on the thatched roof and certain small animals made a living out of them. The gnawing sound was of these animals constantly working through the sacks. And occasionally a sack would open, a little bit of grain would fall through the roof. I actually sighed in relief. Then I went back under the blanket and another breathtaking notion came to my mind. I generally do not like using expletives. All those who know me, know that I reserve such words only for a handful of politicians. But I did end up employing them against my brain. So far my worries were of a supernatural kind. Being of a supernatural kind they had their own safety nets. Deep down you knew this was your fear of the unknown and so on and so forth. But now I was worried that one of these famished fauna might fall through the roof. The mind at night is a regular son of a bleach. It makes the most irrational ideas seem realistic. Hence, for the next two hours my uneasy daze continued.

I had planned to wake up around 4 o’clock in the morning anyway. If you are an experienced hiker then you know how important it is to get up before anyone else. So I took my torch (flashlight in American) and got out of the room. And the cold pounced on me like a ravenous predator. I was on an altitude of 11,800 feet. It was mid October. And there was nothing but darkness surrounding me. The light in my hand was hardly enough. However, the stars slowly became visible. And I could sense that it was the light that was making everything dark. I switched it off. Immediately I was surrounded by stars. It seemed the sky had come down and I was standing in a field of stars. And in a few seconds I was treated to the magnificent sight of the mighty peaks of the Himalayas basking in the brilliant starlight in the horizon. I know people write poetry about sunrise over snow. But the Himalayas in starlight are something else. I had once seen Kanchenjungha from Tiger Hill at night; it made me forget the sunrise. Standing there, with the small light from Rudranath Temple looking more like another friendly star, I could realize a strange oneness, a harmony, a sense of peace that nothing else in the world can give you. You forget that there are only a handful of human beings around you. You forget that life is chaos. Imagine you are standing all alone, no one around you, the entire earth is enveloped in a deep darkness, but the sky above is shimmering with the light from a billion worlds, and the mighty mountains, much more eternal than you, guard you from all the maladies that you can imagine. You just pause there. Aloneness can be a blessing. Aloneness is something we all need to experience. It is the only thing that introduces you to you.

We had our adventures during the descent, but that story is already told. And I also did not sleep the next night. Dog tired I went to bed, and then discovered that the mountain dog I had been playing with had drawn blood. But that story will come another time.